Understanding the Wet/Dry Knobs & Feedback for a Delay Plugin

Note: I'm using Logic Pro X and referring to the "Echo" delay plugin specifically, but I'm sure all delays are the same. The "Echo" plugin is seen below: 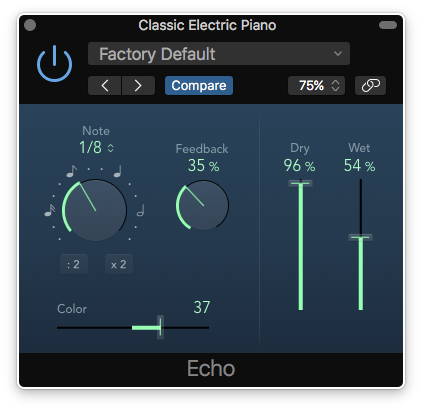 Wet is the volume of each repeat. Dry is ONLY the volume of initial sound. If you are on 100% wet, then you would hear nothing when you hit the note, then only the repeats. If you were 100% dry, you would hear no echoes. I often put the delay on a return track and set it to 100% wet. The initial sound plays from the track it's on, and the delay is separate. The reason I do this is so I have one plug-in for all of the tracks I want to delay, and changing one setting will effect them all the same.

Feedback is how much of the signal is fed back through the effect, creating more echoes. At 100% feedback, the signal will continue echoing forever, getting louder over time, until the feedback loop turns it into noise. If you want the sound to die out faster, keep the feedback lower.

We call 'wet', the return from an FX processor. 'Dry' is the input signal to the effect. So if you turn 'wet' down and 'dry' up, the signal will pass through the effects unit unchanged.

The reason many effects units have a dry/wet setting is so you can either use them as insert effects, or send effects. An insert effect is one where all of a channel's signal passes through the effect and comes out the other side (output) - mixers have an input/output in a single jack for this use. Send effects on the other hand are those where you want to be able to hear the direct sound + the effect - mixers usually have potentiometers named 'Aux(illiary) sends' for this use (among others). There are also auxiliary return channels on most mixers where you can return the sound from the effects unit.

In the diagram bellow, these are the two signals mixed on the output mixer (+).

The picture above is the diagram of a simple, mono delay unit. The input signal going directly to the output is your 'dry' signal. It also goes into the delay line and some of the delayed signal is fed back and added (=mixed) with the input to be delayed again and again and again...

If you set the feedback level to 100%, you will hear continuous repetitions until you turn it back down. If you turn feedback all the way down, you will only hear 1 repetition.

There is also a 'color' slider which I suspect controls the cutoff frequency of a filter. This filter is commonly placed in the feedback loop (where that triangle is) to make each repetition sound a bit different. If it's a low pass filter, the signal will sound duller with each pass through the feedback loop. So if we assume this filter is an LPF, even with 100% feedback, the repetitions would not last forever in some cases.

It is worth mentioning that by returning the delay output on a normal channel instead of an aux return, you can have an external feedback loop with any (insert) effect you wish inside it including the very useful EQ - just send it back the the delay using the aux send on the return channel. But beware. Anything including the insert effects that increases the level in the feedback loop can make your levels explode, as each repetition will be louder instead of quieter than the previous one. Still, this technique is very useful in making more complex repetitions like pitch-shifting them for example.

0
How to adjust the repeat interval and duration for delay effect in Ableton Live?
2
Delay issues while using iZotope RX3 for noise reduction and restoration
3
How to make a Wet/Dry or A/B mix control using Logic X (10.2.2) bus and mixer?
0
Can delay pedals output the delayed audio without any additional effects?
1
Find the delay between an "almost" echoing signal in a recoding
1
Apple Logic with Universal Audio Apollo-Record Wet and Dry Tracks and Headphone Monitor Wet?