I'm using Sonar LE to record a station ID for a little online radio station experiment I'm trying to set up. I've learnt to use a compressor to increase the volume of individual tracks without peaking above 0 dB. I've also applied some compression on the master as suggested here. But the final mix still sounds awfully quiet compared to just about any music file I have on my computer.

Here are my tracks along with their peak volume, volume adjustment and applied effects:

My final mix compression settings are as follows: 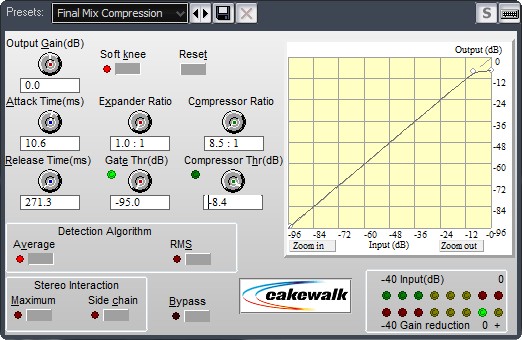 What can I do to further pump the volume? I don't need it to be obnoxiously loud; I just don't want it to sound too quiet compared to the music on the playlist like it currently does.

A limiter is the most brutal form of a compressor, you should use one (at the very end of the FX chain) but I wouldn't let it do too much, it can really start to sound annoying quite quickly. Before it, try just driving the present compressors a bit harder, i.e. any of higher ratio, lower threshold and lower attack. And of course gain makeup – you did actually check that the signal does go to the allowed maximum? Note that individual tracks may in fact exceed the limit, not a real problem if there's a compressor and limiter in the master track.

There are a lot of more special things one can to in dynamic processing:

Hang on here: before starting with that, you should make sure you've also set the equalizers really well. Specifically, from what's visible in the picture, there might be a lot of low-frequency junk around, which may substantially raise the levels without adding anything useful to the sound. Don't be afraid to use hard highpass filters! And try boosting mid frequencies that are "loud" and well-comprehensible but won't raise the signal level too much. Ok, where were we...

I would suggest using a limiter instead of a compressor. While they're both very similar, a limiter can do what you need much quicker and efficiently.

Try taking the compressor off your master out and put a limiter in its place. Drop the threshold so it's always tripped, raise the out ceiling to desired volume, adjust the release, done. Pay attention to the gain reduction meter and try to time it with the sound so it doesn't sound like it's "pumping" or "breathing".

Some people would groan at this methodology, saying it isn't the best sounding option, but I say that in situations like this it's utility over sound quality.

Not the answer you're looking for? Browse other questions tagged audio-recording effects daw or ask your own question.

8
Why are all my recordings fuzzy and quiet!?
2
What equipment do I need to mix and monitor my recordings?
1
Setting up side-chain compression in Sonar
2
Learning how to create, record, mix, and master audio
7
Voiceover drowns in music. How do I make it more dominant?
1
What books and resources can help me better understand my DAW?
4
Building a modern radio studio
0
Recording 2-6 lav mics to a Mac with a Behringer UMC1820?
4
What do classical radio stations do to their tracks to normalize audio volume?