Line input to an iPhone or iPad?

What are the options to get a line level signal into an iPhone 4 or iPad?

Are there any audio USB input devices that work with Apple's Camera Connection kit on the iPhone or iPad? One or both?

Is there a pre-amp or attenuator circuit the can adjust the level and impedance to use the headset input jack for monophonic audio input?

Are there any audio quality bluetooth input devices that will work with an iPhone?

What are the options to get a line level signal into an iPhone 4 or iPad?

Not many. The current king-of-the-hill here is the Alesis IO Dock. It gives you two XLR-1/4" combo jack inputs that have adjustable impedence on them that'll let you go from consumer grade to professional grade line level and mic level input impedences. It also can do Hi-Z on input 2 for direct connection of a guitar or bass. 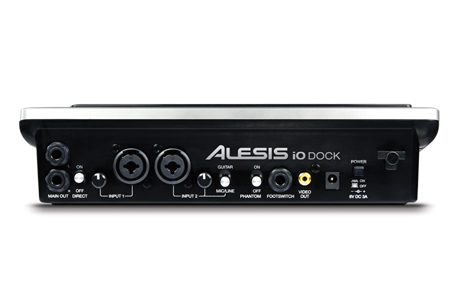 Are there any audio USB input devices that work with Apple's Camera Connection kit on the iPhone or iPad? One or both?

None that I know of. The only ones I've seen use the dock connector to hook up to either your iPhone or iPad.

Is there a pre-amp or attenuator circuit the can adjust the level and impedance to use the headset input jack for monophonic audio input?

Again, not that I know of but that Alesis IO Dock provides you with two proper mic preamps you can use and tweak.

There is an iRig device by Amplitube, but I am unsure whether this interface is usable without the bundled software. I do know, however, that you can bypass the software effects for a clean signal for use in a mixer or other inteface.

You actually have several options here:

1) Apogee Jam ($99) - direct line level signal into iPad / iPhone via the 30 pin dock connector. There are several other options as well but this is probably the industry leader currently.

2) Behringer USB guitar Interface ($30) works with the Camera connection kit no problems according to reviews.

You can use the Alesis i/o dock as well - its more "fully featured" but only works with iPad, and is more then I would be willing to pay for such an interface.

There are also options such as the iRig and AmpKit but those use audio line in's that are much noisier then what it looks like your looking for.

Share
Improve this answer
answered Dec 31 '11 at 3:50
SalmanSalman
Add a comment  |
Highly active question. Earn 10 reputation (not counting the association bonus) in order to answer this question. The reputation requirement helps protect this question from spam and non-answer activity.

Not the answer you're looking for? Browse other questions tagged audio-recording ipad or ask your own question.

0
Line-in recording w/ 2012 iMac possible?
8
How to get line-level record-out on Behringer X2442-usb?
9
What audio interfaces/mixers work well under Linux?
3
Recording electric guitar with+without effects
3
How do I connect Zoom recorder to Yamaha mixer?
3
Recording a headphone output using USB sound card microphone input
2
How to I properly reduce the voltage intended for a speaker to a level appropriate for Mic input?
2
Bose Compact T1 Audio Recording on MacBook
0
Buzzing sound in my audio. I think its the mixer