Finding things to record on the go

All I have is a portable recorder and live in a city with just cars going by everywhere and construction going on every now and again, This might be a stupid question but I live in Dubai UAE and I try to take my H4n everywhere I go but I never find anything interesting to record other than just cars, we also have a desert but how do you record sand in interesting ways. I'm new to recording sounds but all I can record for now is stuff I find around at home, what do you guys do or recommend I could do.

I've been to Dubai, so I know what you're talking about. There's plenty of stuff you can record though, especially with something like the H4N...though I know that construction has died down a lot over the last few years.

Obviously, you've got the beaches, you can easily collect wave sounds or just ambient crowd sounds from them.

You can definitely sneak that thing into some of the outdoor bars, and no one will think twice if they even see it. You could visit the horse races and record ambiences there.

There are always a number of events going on in Dubai, of course finding out what they are and where they're taking place can be a bit of a headache.

There's the still very new transit system. I've ridden on that, and you should be able to collect some interesting sounds of the trains themselves. Plus, you can take it out to the Atlantis hotel on the Palm and grab sounds in that area.

There's the massive arcade that Sega opened up in one of the malls there a year or so ago (right by the Burj Khalifa [spelling?]/formerly Burj Dubai). And there's a massive water fountain "show" that happens in that man made lake/canal outside.

Or...If you're willing to shell out the cash. You could take it in to the ski slope in the Mall of the Emirates and strap it to your ski boots. ;)

I suggest you wear ear plugs for 24 hours, and then have a listen to your surroundings.

Sometimes you need to take a step back from your everyday surroundings and find the interesting elements that you have become accustomed to hearing. Consider the following:

Think outside the box - what can I record that doesn't exist anywhere else in the world? What can you record that I cannot record here in the USA?

Jay's and Shaun's suggestions are totally wonderful! Here are a few more ideas...

I was just about to also launch into a long wishlist of potential recording possibilities when I was struck by everyone's (including mine) enthusiasm inspired by such a simple question (no offence). I think we are all perhaps drawn in by the exciting hypothetical idea of a whole new strange town and world of sounds to capture. So with that in mind, what would get you inspired / excited? Where would you like to be in the world and why? This may help you realise what sort of sounds you like recording, eg. Urban? Nature? People? Etc. and then look for the equivalent in your own environment.

A few thoughts to add to hopefully jolt your creativity:

-One last caveat: there's some great suggestions listed in other replies but bear in mind that many of us work in post production sound and can consequently be quite obsessed about 'deconstructing' our environment into specific isolated sounds so that we can control them better in the studio. This may not suit you if you are phonographer rather than a sound editor.

Good luck! I'm sure many of us are now itching to hear what you end up recording!

Young grasshopper, you are not listening close enough!

Try to get into a big empty new building which has no hear or air systems in it yet - must be cool ambiences in there.

Record the traffic through a tube or something interesting like that.

Record an authentic Dubai train station or airport squawk box or PA system - those are always valuable to put the audience immediately into foreign surroundings in a movie.

Forgive me if I sound like a cliche American, but I'm sure Camel vocals would be valuable recorded at 192K for use in monster movies.

Record foreign ambiences that people would pay a pretty penny for over here in the states.

I'm sure you can get close enough to some of the gigantic cranes and things there to get some great servo and mechanical sounds.

The value of desert ambiences and clean desert wind can never be underestimated in anyone's library.

Some of the musical instruments and things there could be awesome. Possibly getting a job recording a local musical group or theater house which puts on concerts?

There is a myriad of ways to put recording to use.

How about doing the skiing thing but do it down a sand dune with the recorder attached to your boots or ski's. Also, deserts have the most amazing wind sounds and coupled with the sand would be quite wonderful. Cannot wait to hear what you have done.

I wish i had me a desert escape.

I'd go out n' shout and record

How I'd bark my poor head off,

man, what a bizarre set of sounds I'd make!

Hey, perhaps convince a friend to record as well,

and their friends too!

Split them in half

or keep them as one, 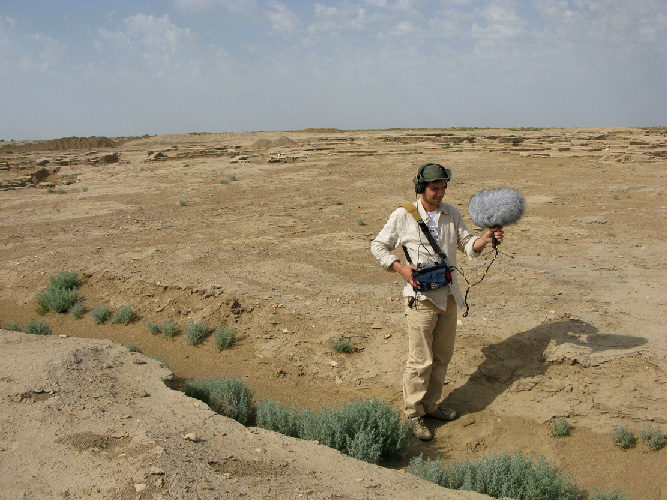 This is not me

I agree with @tim prebble. Wear some earplugs for a bit to "re-sensitize" yourself. In essence what he's actually saying is a bit different though. He's also being a bit of a Jedi speaking in aphoristic tongues at the moment, lol. Which, I really really love actually. What he's really trying to tell you is that the world is full of sound, you only need to pay attention to the details and stop being distracted by the big picture.

To be forward and honest, I don't think I've ever been at a loss for finding sounds to record, regardless of the environment. Sometimes it takes a bunch of bad/useless recordings to figure out where you're going wrong. Either way, just start recording stuff and when your hard drive starts to fill up with crap you'll eventually get it. It takes time to develop and ear for useful field recordings, a solid process for making them and a very in depth understanding of which ones you can make use of based on your familiarity of the tools you've mastered that happen to have at your disposal. ie: EQ, Dynamics, Noise Reduction or whatever makes the recordings useful to you. It could be a pedal board of guitar FX for all anyone knows. Another mans garbage is another mans treasure, no?

It's even crazier in a position like Tim's because he's stuck deeming what might be useful for all people because he actually creates commercial libraries (Yes, listen to that man. He knows what he's talking about).

My best advice besides what I said above is to just pay attention to the little details of the world and use your "cocktail party" skills a little more aggressively. You'll eventually refine your own techniques over time. Never stop asking questions though. Even the Jedi masters are still students and always will be. That's the nature of what we do.

this is a matter of inspiration..

here's a list i couldn't have written two years ago:

traffic all over everything is just one of your challenges.

Keep your ears open for anything out of the ordinary. I just recorded a cool motor sound from a refrigerated truck that was parked up the street, and this morning I noticed the ice cream cooler in the cafeteria at work was broken and making a bizarre noise. Both were cool, unique sounds. You never know what you're gonna find.

Not the answer you're looking for? Browse other questions tagged field-recording city desert sand zoom-h4n or ask your own question.

3
sE Electronics Reflexion to improve field recording
8
How do you wander about with your Handheld Recorder?
3
First time field-recording! 4-channel vs. 2-channel stereo ambience
4
The Speed of Sound: Why does the sound of a car approaching lasts shorter than passing on?
2
hey new yorkers, who's recording occupy wallstreet?
1
First Time Recording in Forests
0
lack of gain, Zoom H4n with Rode NGT2
1
Pocket Sturdy Microphone
0
Want to buy a portable recorder for birthday tomorrow
4
A Recording Ethics Question/Survey