I´m in the process of digitizing a tape which features 90's dance tracks recorded from FM, but the problem is that some idiot (me at age 12) used to change the recording volume constantly between tracks instead of keeping a constant and uniform volume for all tacks.

After individual track click removal and normalization effect, the overall volume has dramatically improved, but it's far from perfect, as you can see from the waveform below: 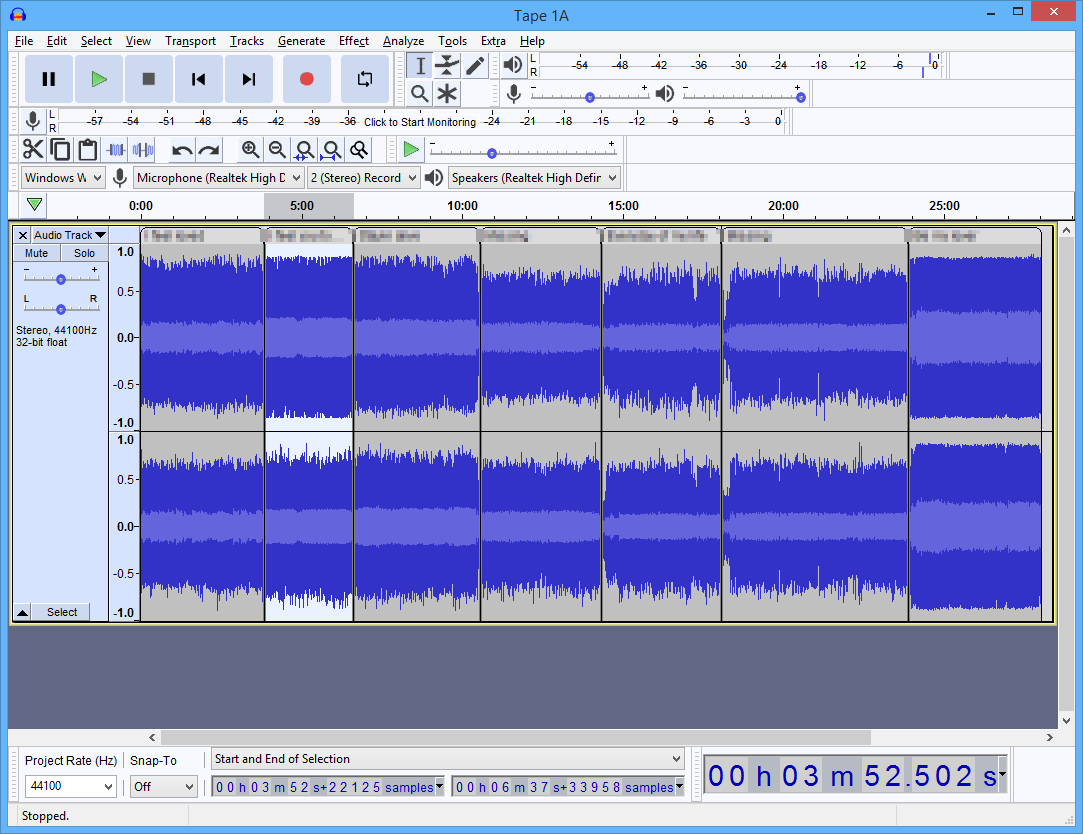 Clearly the inner waveform (light blue) from the second and the last tracks have a much louder amplitude (and do sound louder). Messing around with the Normalize Loudness effect didn't help at all, or I'm using it improperly. My goal is to normalize all tracks loudness to achieve an uniform loudness and waveform along all tracks, as if no one have ever messed with the recording volume knob 25 years ago. Any suggestions are welcome, thanks.

There's a difference between Normalisation to absolute loudness & perceived loudness.

Standard Normalisation is absolute. It will turn the track up until the highest single peak reaches 0dBFS [deciBels full scale] (or whatever maximum loudness you have set). This leads to less dynamic tracks appearing to be louder than more dynamic tracks.

Modern streaming services now use perceived loudness instead - this was partly to combat the loudness war - but gives the wanted effect of tracks generally appearing to all be at about the same level.

Different streamers use different values for this, but a partly [or grudgingly] agreed-on standard seems to be -14LUFS [loudness units full scale]. This has the benefit of turning down the most heavily-compressed tracks & turning up the least compressed, all in such a way as to avoid inter-sample peak values above 0dBFS when converted to lower-quality mp3 etc for streaming, thereby preserving quality slightly.

Back to Audacity… you can find this in Effect > Loudness Normalisation… [the opening paragraph is discussing TV loudness, which is lower than 'radio', hence the -23 mentioned in there.

Anecdotally - after more than a decade of constantly chasing the volume on my in-car audio, I recently found a bulk converter utility that enabled me to set my entire iTunes library to -14LUFS in such a way that iTunes itself didn't know anything had changed [thus preserving playlists, counts etc]. As a result, there is considerably less swearing & volume chasing… at long last ;)

Not the answer you're looking for? Browse other questions tagged audacity volume normalize or ask your own question.

4
Audacity: Increase audio volume in audacity software
1
Bring all recordings to the same level
5
Sox how to normalize volume of multiple audio files
0
Novice question: should I normalize my audiobook sound?
0
How can Increse the volume for a specify range of peaks AUDACITY
1
Audacity - moving the waveform graph up/down
0
How to Procedurally Change Selection in Audacity Chain (Macro) | Normalize Long Track in Chunks
1
Normalize audio above a sound level in audacity
2
Normalization - peak amplitude level vs actual loudness level