How would I configure huge custom surround setup playback in Windows?

Suppose I have nine sets of stereo speakers spread around the room, each connected to the other in the set, as indicated in the diagram: 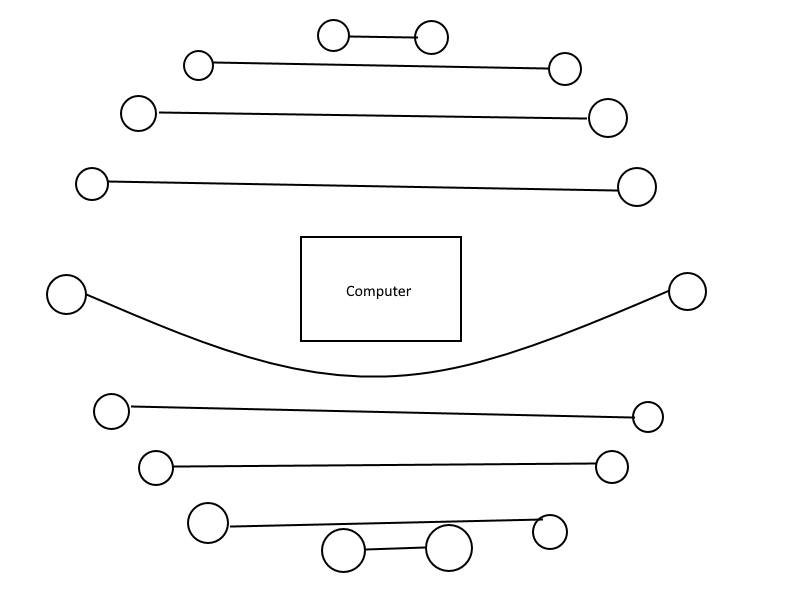 (assuming each of the speakers is an identical model)

Assuming I know the geometric positions of each of the speakers in the room, but the layout is fixed and not compliant with any surround standard (e.g. 17.2), is it possible to achieve playback through a Windows device onto each of the speakers? I would need to somehow interpolate between surround points based on the physical locations, but I am unfamiliar with any software/hardware required to do so. Furthermore, each set of speakers only has one AUX cable, so it would need to be provided with instructions for left/right relative to its position in the room: 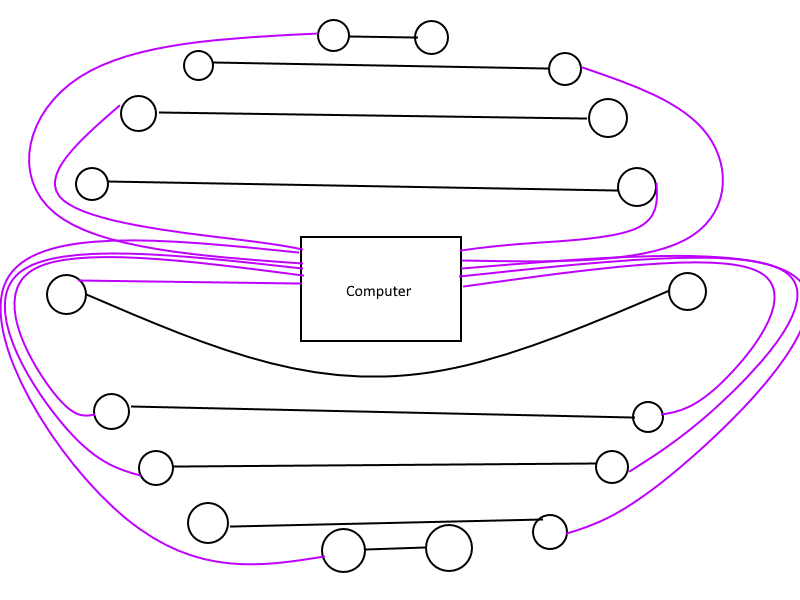 E.g. in the above diagram, the top row of speakers would need to receive an AUX signal where the left channel actually represents the front-left of the interpolated surround sound, and the right channel is the front-right.

So far, I don't know any software up to the task, nor even a way to connect nine AUX inputs up to my computer. Any suggestions how this could be done?

Let's just call this impractical at best.
You are not going to do this with an unmodified home computer or on a shoestring budget. You need capable hardware & software.

If you don't start with 18-channel output hardware [not cheap] you have zero chance. Hardware tends to be 16 or 32-channel, so for 32 perhaps this RME may be in your budget, at a mere 3 grand ;)
Once you do, then you also need 18-channels of audio - you can't split stereo or 'pre-recorded' 5.1 into more channels in any sensible manner.

If you're creating a soundtrack from scratch & have the above-mentioned hardware, then all you need is a DAW capable of that many output busses. I'd recommend Nuendo… another £850.

You can do this on an umodified home computer on a shoestring budget. Getting many many audio channels out of a Windows PC is pretty doable nowadays. For starters, get Reaper, which is the DAW of choice for multichannel audio, it's cheap, and free to try. With ASIO4ALL (free), you can expose all audio i/o attached to your system to the daw, bypassing Windows routing limitations. This gives you a lot of options for kludging (sadly undervalued verb in the audio world these days imho) things together you might have already, or could get cheap. Some things with audio outputs you may already have:

-hdmi, output to tv or reciever. 2 ch digital stereo at least, maybe more with the right receiver and software decoding solution -your built in soundcard, another 2 ch of stereo, or pick up a cheap as heck pci surround card for many more than that. -Bluetooth devices of all shapes and sizes (taotronics for eg makes cute tiny recievers with output jacks)

how many you can use at once depends on your pc of course, but throw a few more cheap pcs (or phones!) onto your wired network, and you can use NDI 5 tools, or Voicemeeter (lots of free options here) to route channels to their assorted outputs. there will be lag, and differences in signal strength, and getting those paths stable will take some futzing with gain and buffers in different programs along the way, but getting sound to n number of speakers in a room, very doable. getting the sound you want out of this will be the harder part, i think, depending on what exactly you're going for here. GENERALLY speaking, with any multichannel system of correlated signals - surround sound, ambisonic, distributed audio system - a constraining factor is phasing, and this is something you'll have to solve on your own if yr not implementing a standard format on standard gear. an intro to theme park distributed audio (reablog? 'spatial audio pt 1' iirc) might be useful as a starting point - good explanation of addressing phase issues in large settings, maybe less helpful if yr goal is -spatial*, ie reproducing a coherent image.

look to ambisonics for a theoretical approach to that is not tied to specific channel counts like 5.1 surround. but beyond theory, while there are now many many plugin solutions out there for doing this kind of thing* in your DAW, Reaper's surround suite is a good starting point, very easy to specify any weirdly specific speaker layout and start panning sounds around the room.

careful measurement from each speaker to listening position(s), combined with an spl meter (or a mike and the in DAW vst equivalent) are the basic tools you have to adjust for variance in volume and frequency output of your kludge of speakers, the manual, and static version basically of what a surround sound receiver's room correction does automatically. REW room wizard is free software that can help you make sense of the reverb of the space yr in.

*spatial audio, or as your mom would say,"whatever this is, why don't you just go for a walk instead?"

Not the answer you're looking for? Browse other questions tagged software hardware recommendations surround-sound wind or ask your own question.

10
A trip down your DAW memory lane
1
surround setup / combining different speakers?
2
How to encode custom multitrack surround WAV in LogicPro9 or Reaper?
2
How can I combine various audio inputs into 1 optical ouput to feed into my surround sound?
7
How do you configure three or more phrases to be mapped to a one-button-per-phrase loop triggering?
3
How to setup microphone with pre-amp for general purpose PC input use as well as audio recording?
0
How to slow down playback speed of an audio file in Power Media Player--in Windows 10
1
Is a cheap external DAC sufficient to connect 4x 250W powered PA speakers and an active subwoofer?
0
Mac Pro 3,1 - true 5.1 control over outputs?
3
Denoising studio induced noise and noise due to poor recording