Good way of clamping things to a mic stand

I'm starting to think about audio recordings that I want to make in the next few months and one of the sounds I'd like to capture is rain on an umbrella.

My first thought was that I could stand holding an umbrella over my recording gear but I have problems with patience and would probably only last a minute or two before I wanted to move - This would cause noise from the raincoat that I would undoubtably be wearing and throw off the point of the recording in the first place.

My next thought was to clamp the umbrella onto a stand which was also holding the recorder and mics. This seems like a good idea but I'm missing a few parts of the picture to evaluate it properly.

Given an average mic stand set at its lowest (about 1m-1.2m) and that I'm likely to be recording on uneven ground (a country park), what can I use to clamp the umbrella to the stand and still be able to set an angle for it? and how can I reduce the chance of the whole thing blowing over?

Why not use a lighting umbrella, straight into a light stand - made for each other. 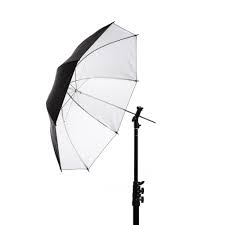 The lighting clamps generally come with adaptors &/or inserts so they'll fit a mic stand thread [either size], or otherwise they'll just drop right over the end of a standard mic stand & clamp to the straight rod underneath.

I found a cheap way of doing this.

I went online and found a scientific equipment supplier and ordered a few "Retort Clamps" (picture below) for a few pounds each - very cheap and will fasten almost anything to a mic stand at any angle.

I think these will do the job and potentially many more around the studio.

4
"Guerilla" (not "Gorilla") sound recording
4
Career Potential in Field Recording
3
Portable mic stands, laptop bags, bags for mics? (equipment for a travelling recordist)
6
What do you get when an iPod goes through a washing machine?
1
External Mic use (eg. Rode NTG-2) with the Sony PCM-D50 and Zoom H4n
3
Condenser Mics: Maximum SPL in relation to Distortion, Physical Damage and a -10dB Attenuator
5
Recording acoustic guitar with Zoom H4
2
How to make recorded voice sound good
2
Need hand-held recorder and mic for use in old courtrooms