I'm looking to acquire a vocal microphone for a bass singer who can hit a reliable F1 (about 44 Hz). Points where the singer reaches down to this F1 would be some of the highlights of a performance.

Does this singer's range mean a 50-15000 Hz mic is to that extent undesirable? Especially if the dB curve falls off quickly as pitch approaches 50Hz from above? Would it be better to look instead at devices whose range-lower-limits are stated as 40 or even 20 Hz?

Or is all this being over-fussy, and if so, at what point might the range limit become important?

(Of course many factors go into finding a suitable mic, and there's no substitute for a real-life tryout. This question just focuses on one filtering factor during selection.)

Let me approach this by sneaking up on it from a different direction:)

Take a bass guitar. Low E is about 41Hz. Most people know what that sounds like & how it works when you hear it on records, etc.

Let's take a famous example. Queen - Another One Bites the Dust. Now this famous opening bass riff to all intents & purposes is in F - though if you watch the video you'll see he appears to use an open E to play it - maybe a bit of tweaking went on, idk.

So, this F is right down at that 44Hz you mention.
44Hz is way below what cheap hi-fi & computer speakers can actually reach, whatever they claim… & yet you can still hear the note quite clearly. It doesn't vanish off into no-man's land below the reach of almost any system. I even tested this on my phone's internal speaker - it's not exactly bending the walls, but you can still discern the note.

So, this means the actual sound we're hearing on this record is not entirely dependant on being able to accurately reproduce 44Hz. In fact, on old vinyl 45's, they used to roll out the bass entirely below 45Hz, because it caused problems with the needle jumping out of the groove.
The harmonics & overtones that make up the sound are sufficient for us to perceive that it is a low F, even without a true, clear fundamental.

By a little extrapolation, this is what a bass singer is also doing when he's reaching right down there. Again, you can discern the note even on fairly small speakers. Pianos are similar, the bottom end is made of considerably more harmonic than fundamental, yet we can still discern the 'true' note.

Right. That tells us we don't need to be able to accurately repro 44Hz to use a mic on this singer.

But wait! 50Hz to 15kHz. That's an odd set of figures. No-one makes that kind of mic, do they? Shouldn't it be 20Hz to 20kHz?
They do for live vocals. It prevents rumble at the bottom, by rolling off & it saves all that at the top that people can barely hear. Wasted data up there, for sure, live.

Here's the frequency spectrum for an SM-58 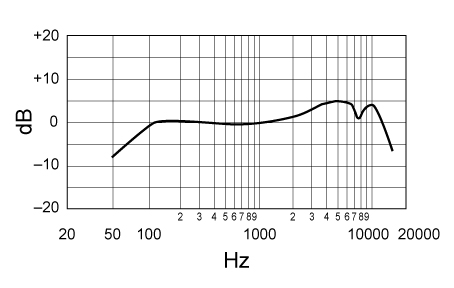 which you'd think might be a bit of a bumpy ride right through, and definitely light at the bottom end - but not if you push your face into it. Proximity effect will belie that apparent rolloff at the bottom. The humps at the mid-top add presence for consonants & the little dip in between is just right for killing a fair amount of sibilance. Someone thought that through just right.

So… how come all the really good mics can claim 20Hz - 20kHz? Usually because they're studio mics. The really expensive ones will also have a pretty decently flat response right through that too. Cheap ones… watch out for how they massage the numbers & charts to make them look better on paper. Read twice, buy once [or not]. A good one wil sound more 'open' & 'airy' whilst still covering all the audible frequency spectrum. Live, you just don't need that so much.

So what do I pick?
If you're using this live & therefore can push a good bit of proximity effect into it by keeping the mic pressed tight to the singer's lips on those money notes, you can't go wrong with an industry-standard SM58. You'll never need anything more.

If you're going to be using it in the studio, then you could still use a 58 [I've used them on lead vocals before now when it was just right for the feel] or you could go for the more open sound of a large condenser.

Ultimately, you have to make the call, but don't give up on the old faithful 58 before you try it.

A late thought - I just listened to Bobby McFerrin's Don't Worry, Be Happy. I think the lowest note I heard in that was an E… and that's entirely made up from vocals. I've no clue what mics were used to record it… but you can still hear the bottom E on a phone [though only just if you hold it close to your ear].

Not the answer you're looking for? Browse other questions tagged microphone vocals frequency bass or ask your own question.