How do you set each stage of compression when using 3 or more compressors in a DAW?

I have a hardware FMR Audio Really Nice Compressor (RNC) that uses 3 stages of compression. It gets me really good results in recording live theater, where the audio levels go from a stage whisper to full applause, and I'm too busy with the video camera to ride the gain. Now I do multitrack audio on a Zoom H6, which also has the benefit of 24/96 recording over the video camera's 16/48. How would I set up DAW plugins in post production to effortlessly get me the same result as the RNC?

Assuming you're not going to find data published on exactly how the RNC does it, I'd think more in terms of two-step rather than 3, just with a good amount of knee in the first step.

You still need to think in terms of 'some', 'some more' & 'brick-wall' but a reasonably modern multiband comp setup should be able to handle the first two like a breeze.

Personally, I'd go with the Waves Linear Multiband - but that's mainly because I've been using it so long I know exactly what I can get from it. 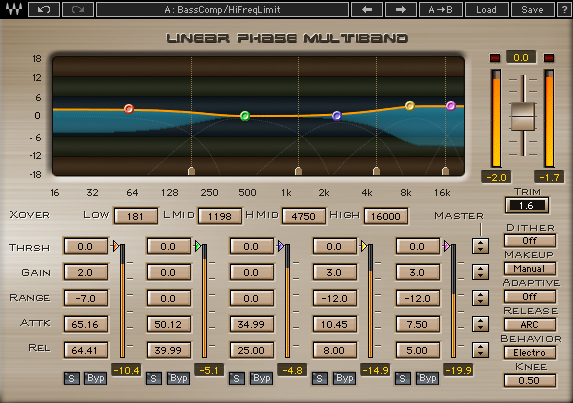 Waves used to cost a fortune & they'd want to sell you massive bundles of 'everything' whether you needed it or not, but these days you can get individual plugins for 30 bucks each. That makes them well worth a look.

The thing about it is you can not only adjust knee, like any comp, but you can adjust its behaviour, whether opto or electro, speeds for every band & whether it uses an adaptive algorithm to prevent pumping. It doesn't hard-limit the output but afaik it's 64-bit internal processing so it never crunches on overs.
One additional benefit is you can see what it's doing, as well as hear it. I find that invaluable in situations where something feels 'not quite right' but you just can't quite figure out what.
I would suggest grabbing the demo & spending at least a week with it. There's a lot to cover from what looks like such a simple interface. It really is massively powerful, you can go from can't tell it's there to ouch.

I actually have one permanently strapped across my main HTPC for watching movies, lifts the whispers, stops the explosions from bending the walls ;)

Behind that I would just drop in one of their Maximisers. They do several, single & multi-band. I'd probably go for a single band, maybe the L2 Ultramximizer used very sparingly just as a last brick-wall before output. You don't need to do anything 'dangerous' with this, just use it to keep a lid on any extremes.

There are, of course, a myriad similar plugs from a myriad companies. These are just the ones I'm used to & will go to first in many situations.

Looking at their site [which I haven't done in a long time] they now do a C6 Multiband Comp, which might also be worth a look. I've no experience with it, but I used to use its predecessor, the C4 before I switched to the LinMB.

Not the answer you're looking for? Browse other questions tagged post-production compression or ask your own question.

4
Compression? When do you use it, if ever?
3
When you are mixing dialogue, compression settings for stem
0
Post Production, How To Become Faster?