What changes are need before using my sound on social media?

I am a keyboardist/pianist. I am having trouble with my keyboard sound at some point.

I usually put my keyboard playing videos on social media. I record my keyboard through a cable to laptop(Audacity), so it won't change 99.9% of sound quality and no noise issues.

The problem is actually problematic. When I use my headphones (High-quality headphones) to hear my recording on any social media I can see no difference between the original and that.

But when the same thing I hear without headphones(with a phone speaker) then my audio sounds so annoying. [I have a Yamaha keyboard and no doubt its sound is at its best]

I have also seen other's recording like Rousseau's: https://www.instagram.com/p/B4K-V-XFD7v/

And this is my recording: https://www.instagram.com/p/CMcHmpiBfhd/

You can literally see the difference. But when you'll check my recording with headphones then it sounds amazing as the original.

So my question is what changes should I have to do before posting my recording.[Bcoz most people are going to see my content without headphones.] Release, Reverb, cut off, and other factors are the main issue on my guess.

What changes (in sound terms) should I have to do (in any audio software after recording) to get better sound?

There are no technical problems with your recording that need fixing. I'm afraid I'm the wrong person to ask about using Audacity effects as the only ones I need for my voice recordings are noise reduction and (level) normalization. You can experiment with the available effects or see if another sound design user can help.

An external audio interface may be useful with low-level signal sources such as microphones and instrument pickups but is unlikely to offer any advantage with an analogue line-level source such as an electric piano/synth. As you're already using the USB to Host feature for digital recording on your Yamaha PSR-E453 you won't get better than that. People listening via a phone are likely to be listening on headphones or earbuds.

Why [does] Rousseau's recording sounds good ...

I ran your recordings through a spectrogram program on my phone. (Spectroid by Carl Reinke on Android, listening to recordings played through a 2.1 PC speaker system. There is a local 10 kHz signal at -72 dB.)

(I'm an electrical engineer but not a musician.) The voice you're using, which seems to have a musical box quality to my untutored ears, has quite a thin spectral content to it (left hand of the picture) giving a rather thin sound.

For comparison the right hand spectrogram is an instrumental section from the original Queen recording of Bohemian Rhapsody (all instruments).

Artistic decisions are for you, not me. If you want a sound closer to the Rousseau recording you could re-record the piece using an acoustic piano voice rather than the current voice. Or you could choose one of the other 756 available voices. But we don't need all music to sound like a Bohemian Rhapsody cover. You should make your own artistic choices and not worry about sounding like someone else's work.

Having listened to the recordings on a phone, headphones and a 2.1 PC speaker system I can't hear a marked difference between them, beyond the expected lack of bass on the phone. I wonder if you are too close to the subject to get a full view of the difference between the live sound and different playback equipment? Do you have a local musical colleague who can listen to you play live then listen to different playback equipment and give you an independent view of the relative quality of varying playback standards?

(The spectrograms below (upper section) plot log amplitude vertically against log frequency. The yellow trace shows the instantaneous plot (at the end of the recording) while the red trace shows the peak level during the whole recording. The lower waterfall section shows amplitude nominally colour-coded by the scale to the left (in practice pink = sound). The frequency axis is shared with the upper plot. The vertical axis represents about 20 s of time, oldest at the bottom.) 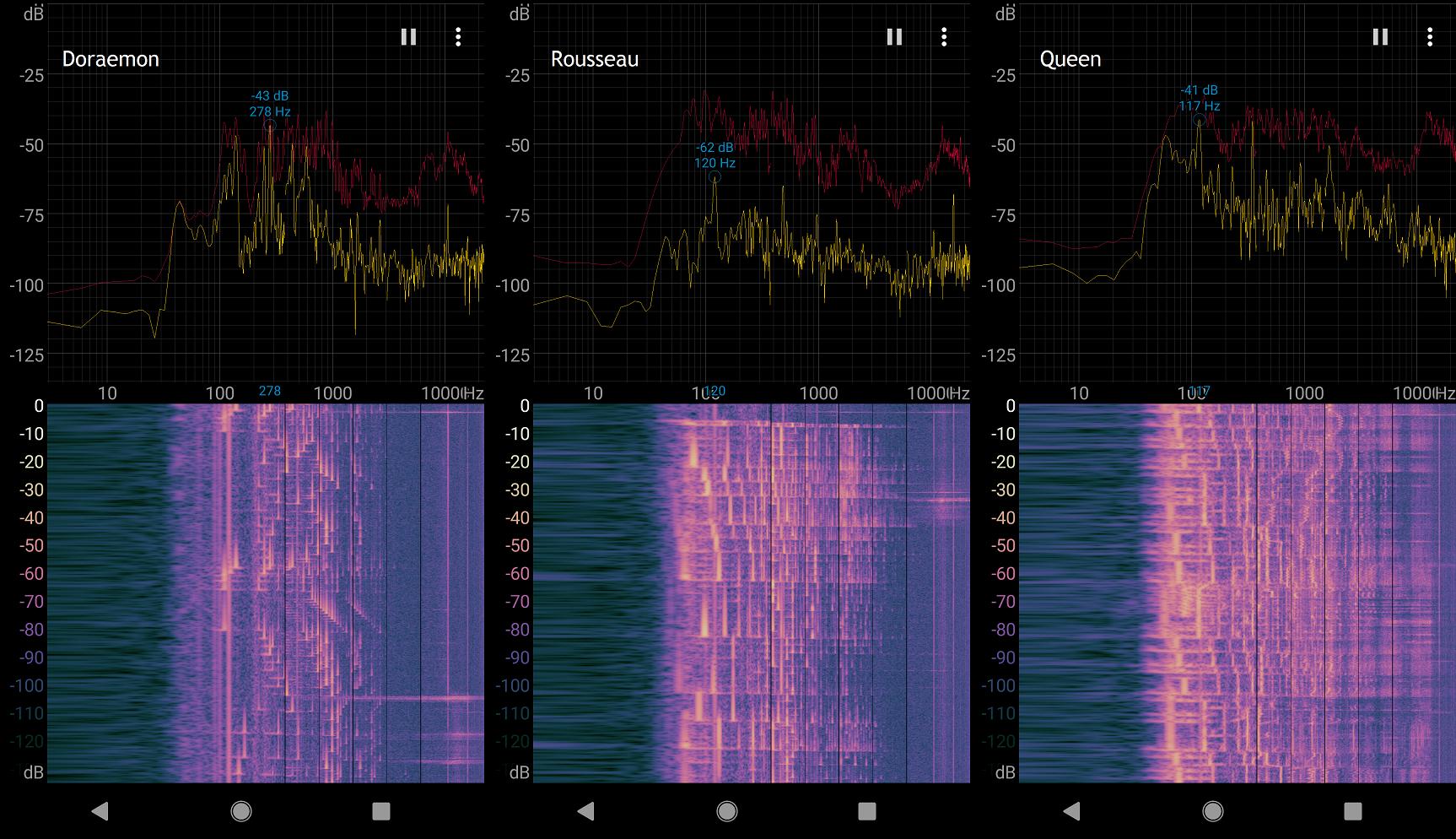 Not the answer you're looking for? Browse other questions tagged piano keyboard sound or ask your own question.

1
What equipment do I need to record the audio from my piano keyboard?
1
What techniques are being used here? // Commercial Sound Design
5
Need help cleaning, and editing sound effects using multiple mics
1
The ways to improve a piano recording production
1
Are there any acoustic piano patches which model the sound of a key being released?
3
What are some good in-depth resources for learning Sound Design?
0
Need Speakers for sound masking