Acoustic guitar with 2 pickups, but no internal mixer: what to do to make it mono?

I have a custom Taylor Dan Crary guitar which has two pickups installed. One goes to the left, one to the right stereo channel.

One pickup is for the strings, the other for the body sounds (ie. percussion).

The current owner used a Y-cable to split the stereo signal into a separate left and right mono output, then plugged each output into his mixer, and there he could decide how the signals would be mixed.

I'm a street busker traveling with minimal luggage, and I need to keep my gear as little as possible. I have two inputs on my little PA system, one for my microphone, the other one for my guitar. I don't want to carry around an additional mixer. So I need a way to mix those two signals together into a single mono channel.

I have no idea about acoustic engineering, but I think it should be possible somehow to build a simple adapter which has:

Preferably, it would offer a little control dial/knob so I could manually choose the wanted ratio.

I have a friend who knows to solder audio cables and such, he just doesn't know a lot about guitar gear, so it would be great to get some advice from you guys.

Another way to go could be the installation of a small mixer into the guitar's body. I don't like the huge plastic elements and displays of many modern guitar mixers; in fact, the Taylor's unobtrusive three little knobs are most appealing to me (while the Dan Crary in question doesn't have any of these at all).

So maybe there is even a small mixer that allows for what I need which would only have a single knob on the outside of the guitar body (I don't care too much where it would be... possibly directly next to the stereo output)?

Any help is highly appreciated. Thanks a lot. Josua

You can wire a TRS at one end to link the tip & ring, then to a regular 'guitar jack' TS at the other.

This is basically how a Rickenbacker stereo sums to the mono jack. 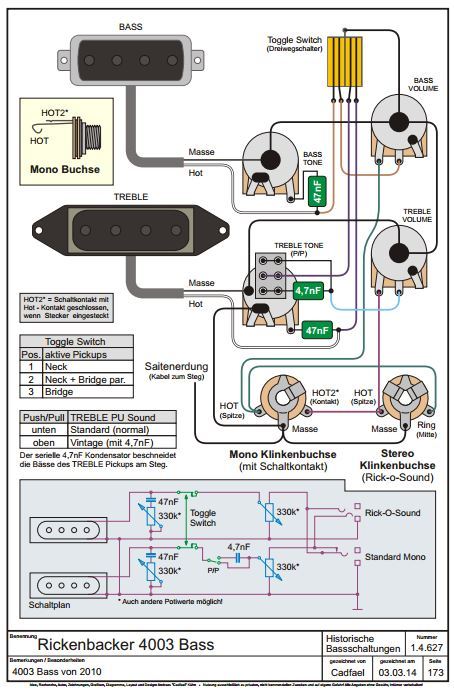 Whether you build it or buy it, what you're looking for is called a "2-channel passive mixer". (Passive because it requires no power supply.) Even if it's not adjustable, it's still considered a "mixer" in an electrical sense.

It will be helpful to know more about the pickups in the guitar: Is the "strings" pickup magnetic? Is the "body" pickup piezoelectric? Are there any active electronics (i.e. does it need a battery?) If the pickups are of different types it will take more careful consideration (or at least experimentation) to get it right.

If both pickups are of the same type and approximately equal electrical characteristics, a passive mixer is very simple:

I found a commercial product that goes to the other extreme of complexity, flexibility and ruggedness for about $130. It's still completely passive.

Not the answer you're looking for? Browse other questions tagged stereo guitar mono preamp or ask your own question.

19
Stereo and mono cables and jacks? What happens when you cross them?
12
What's the point of putting electronics inside a guitar instead of just outputting the raw pickup signal?
4
What are good amplification methods for percussive fingerstyle (on an acoustic guitar)?
3
How to get AUX send mono signal converted to stereo?
1
Is the perceived power of 2x60W the same as 1x120W?
0
Mixing board output to single Bose L1 compact
0
What's the easiest way to utilize the stereo tracks on my Zoom L-12 as microphone inputs?
0
Can a circuit designed for mono jacks work with stereo jacks?