I wanted to make videos with good sound quality, then I bought Zoom H4n Pro to use it as an audio interface.

I use Mac; I connect H4n to the Mac via USB. I could set up QuickTime such that it records my screen as visual input and what I say to H4n as audio input.

Now, I want to hear what I'm saying to H4n while recording. Because I think if I can hear it, I could speak better (it's like Karaoke, we sing better if we hear well what we sing).

There is a headphone socket on the left side of H4n. I tried to plug a headphone while recording, but I could not hear anything.

Does anyone know how I could set up my Mac & H4n & QuickTime (or other software) such that I could hear what I'm saying to H4n while recording? If I need to buy some other equipments to enable this, I could...

PS: a youtuber with a microphone (rather than h4n) and a headphone, I guess he could hear well what he is saying without lags. Isn't it possible with h4n?

PS: From this video, we could observe that

So how could he achieve this?

I believe it is on page 71 of the manual: Input / monitor / On. No extra equipment needed. ( Disclaimer: I have not used the H4n ).

You're going to get latency with any software loopback structure. Just do what pro studio vocalists do, only listen to one side of the headphones. Pull the other off your ear. 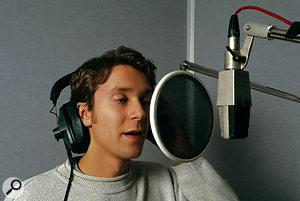 Not the answer you're looking for? Browse other questions tagged mac zoom-h4n quicktime or ask your own question.