Why is this audio obfuscation algorithm not working?

I'm the author of software that, among other things, records audio. I got the requirement that the audio should be encrypted or at least obfuscated before saving to disk, so that someone using conventional audio software can't just listen to the output files and hear potentially sensitive information.

So I developed an algorithm to map any byte to a different byte, using a pseudo-random mapping, and then I can unmap by mapping in reverse. The byte mapping isn't totally random, but the correlation between input bytes and output bytes is very low, around 0.1.

Visualized as numbers, this really scrambles the bytes and produces a real mess of the data. And when you apply this to an audio file and listen to the result, it sounds like garbage, which was the goal.

But, to my astonishment, during testing someone did a recording of himself speaking, and in the scrambled file, you can still hear the original audio. It's distorted a bit and there's a lot of noise, but the audio is audible.

I took the waveforms of the two audio files and superimposed them like this: 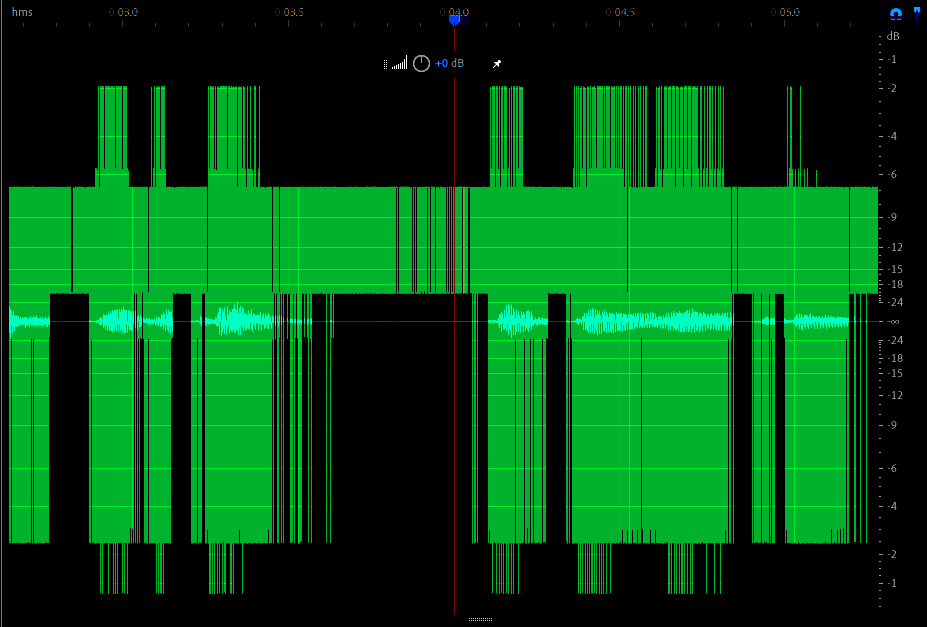 Despite the lack of correlation of individual bytes, there does seem to be some correlation between the original audio (the inner, lighter color) and the scrambled audio (the dark green).

What could explain this?

The process you are using is not going to work, as you have a one-to-one mapping of input to output. Any time you do that, patterns exist that relate to the original.

This type of algorithm has been attempted many times in various fields, and it never works to protect/obfuscate. This is why we tell security/crypto/dev folks to never roll their own crypto.

What you need to look at is the consumr level encryption built in to all operating systems these days. It will do the job way better than you can, keeping your files safe from tampering, either protected at user account level (meaning only you can access them), group level (so a group of accounts can access them) or password based (so anyone with the password can access them)

Not the answer you're looking for? Browse other questions tagged audio-recording signal-processing digital-technology or ask your own question.

2
Why does my NI Komplete Audio 6 have very low input volume?
10
Are there any Audio Interfaces supporting USB 3.0? If not, why?
2
How do I capture or create first-person audio?
2
How can I simply record, edit, and export one track of V/O?
2
How to fix an audio-set with wrong levels
3
Audio Signal Difference Extraction
0
Why we hear noise (when it's silence) while AUDIO - RECORDING
4
Why do some audio amps use AC while others use DC