My understanding is that a distinct sound will generate waves of identical amplitude and frequency, but that most things (such as people's voices, music intsruments, etc) produce multiple distinct "sounds" (waves) at the same time.

My understanding is that the base wave generated by something that does this (something like a human voice) is called the fundamental, and that all the other "secondary" sound waves/signals generated are referred to as the harmonics. And that the set of waves as a whole (the fundamental and any accompanying harmonics) is referred to as the timbre.

Hence, my understanding is that the "sound" we hear with our ears is really the timbres of the things making the sounds (some type of aggregation/composition of its fundamental plus any other harmonic waves generated).

In this video of a digital oscilloscope in use you can see (around 0:40 seconds in) that when the author speaks, only a single wave is produced. Whereas, given my understanding of "sound" as being the timbre, I expected to see multiple waves displayed on the screen (one for the fundamental and any others for the respective harmonic waves).

My question: is this oscilloscope displaying the author's "timbre" wave (some type of aggregating or composition of his voice's fundamental plus any accompanying harmonic waves)? Or is it somehow filtering out the harmonics and only showing his fundamental wave? Or is my understanding of sound waves inherently flawed?

You have a slight misunderstanding of what a wave is. Your ears (or an oscilloscope) will hear the sound of pressure increasing and decreasing. That's what sound is. The air in your ear can really only move in or out, so there is only one "waveform" it is sensing, no matter how many frequencies are in that waveform. No aggregation is required. It is "aggregated" by default.

If you have a single frequency sine wave, it will be very easy to see a sine wave on the oscilloscope.

If you add other frequencies that are related to that one as integer multiples, then it may look like a sine wave with wiggles on it.

If you add frequencies that are unrelated, the wiggle may look much less like a wave and more like random noise.

But in all cases, it is still 1 wave. You can only see those frequencies in the wave by using something like a spectrum analyser or fourier transforms to extract them. Our ears do this very well, which is how we understand things like octaves (where one frequency is double another one, etc)

Here's an example from cauk.tv 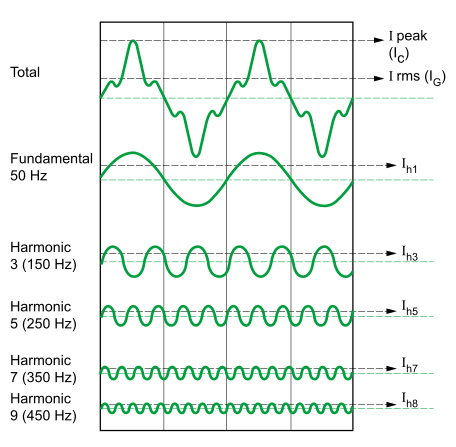 Not the answer you're looking for? Browse other questions tagged waves timbre harmonics fundamental or ask your own question.

5
Difference between Waves MaxxBass and Waves LoAir?
6
Harmonics and InfraSound
1
Waves LoAir layering
3
How to describe the bass tone/timbre heard in the examples?
2
Can a digital sound wave take any shape?
3
Scales vs. Harmonic Notes
1
How do sound waves work that make certain intervals sound good?
0
Threshold and Out ceiling in Waves L2
0
On proper use of Waves L2