So far I have never declared or had issues on arrival but as I'm getting more gear, I'm getting a little apprehensive when going through customs. All this expensive electronics could amount to a serious set back if one has to pay import duties.

I'm very unclear as to how it all works. What am I supposed to do on departure and arrival. Must I always declare when I leave any country, or is it a once off thing to be done when leaving the country where I purchased the gear from? I don't have any receipts for my older gear.

This a little variant of my question... My girlfriend is visiting me from the US, and equipment is literally double in South Africa so I want her to bring me back some needed gear. If she declares it on her way out, will she not need to pay on her way into SA (if she says it's her personal gear)? What about on her way back with no more gear, will they check?

My question is a bit unclear because I don't understand this world, I tried to find answers online but it's impossible.

Thanks for your help.

Every country will be a little different, but the solution usually amounts to paperwork, for carrying any significant amount of equipment.

Governments are usually concerned about local reselling that evade proper import duties. The key seems to be having complete documentation around ownership of the equipment, and paperwork that states that this gear is for a specific use and will not be resold. Customs, therefore, would logically assume that your gear would be leaving the country when you do.

It's a totally valid question about your significant other leaving the country without said gear; I'm usually an optimist on such things, but the forms she'd have on the way out would logically be also checked on the way out. But I've not had specific experience with that, so I can't say for certain.

Bigger productions usually ship gear separately than the personnel. People carry the basics just in case, but use "shipping expeditors" or even FedEx to ship the gear, all insured, of course. Raises the cost but gets around the carrying of large amounts of gear. Some production mixer on another board reported that he overnights his kit via FedEx to the hotel he'll be staying at. (In the US, I've never had lost luggage on nonstops, but add one stop to an itinerary and it's practically 50/50 if the gear will follow you properly and ontime!)

Hopefully some other members of SSD will chime in with even more experiences and insights..!

Having done this a couple of times now for work, I can provide an answer...but you're probably not going to like it. As Nathan mentioned, it depends on the country. It also depends on the work you'll be doing while in country. That's the short version.

If you're traveling with a small amount of your own gear (by that, I mean fits in the suitcase with your clothes)...and plan to carry it back out with you...then you're probably not going to have any customs issues. Once film licenses start getting involved when traveling as part of a crew, things begin to get a bit more complicated. In those instances, it's rare that I haven't had to declare gear on the way in and out, with some form of itemized list, and have it randomly inspected. We've never had to pay import duties in those cases, but there are frequently customs fees that need to be paid (on the way in, way out, or both).

We've always travelled with our gear, but from what I've seen...the shipping option that many people use now ends up very similar. They just don't have to deal with flight-checking gear and customs immediately after long flights. There's always paperwork involved in those cases, and the required paperwork varies based on the nations involved (note the plural!!). Most countries have some sort of customs information available online for film/media crews. They're not always easy to find, and it may be in your interest to contact an embassy/consulate if you're having trouble.

As to your other question, import duties are expected for any purchases made outside of the country they're coming into (provided they're not going back out with the person who brought them in). The U.S. provides a personal allowance (can't remember if it's $500 or $1000) on purchases brought back during travel before they start charging import duties. I don't know if other countries do this or not. If your girlfriend has declared it at some point during the travel, there is a possibility that she'll be checked for it (definitely if she gets pulled for a random screening). If she doesn't have it, she'll need a solid excuse (i.e. physical copy of a police report) or she could get in trouble. I have no idea what those kinds of fines are like.

It's a quagmire to be sure. Hope this helps a little.

It is now common practice to ship equipment rather than carry it as hand luggage, especially from country to country. It is surprisingly safe and reliable, Pelican cases are the best to use. I'd still purchase the shipping insurance, although I don't know anyone that has had to make a claim yet. 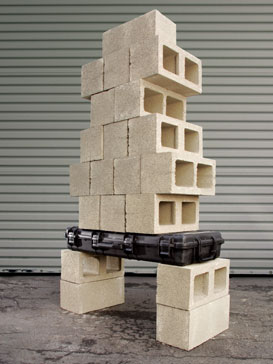 I took a big guitar capo through customs in Belgium once and spent an hour convincing them it wasn't a knuckle duster - they didn't care at all about my Rode/Fostex/Laptop/Blimp/XLR's/Headphones.

Not the answer you're looking for? Browse other questions tagged gear travel or ask your own question.

2
Tips for traveling with audio equipment.

5
How do you insure your gear? Or do you?
2
Tips for traveling with audio equipment.
3
Portable mic stands, laptop bags, bags for mics? (equipment for a travelling recordist)
8
How do you wander about with your Handheld Recorder?
7
What non-standard gear is an important part of your kit
12
Going Into Debt for Gear
1
Buying gear (yeah i know, we've been here before...) Or Sonosax SX-R4
6
Live rock band having issues with vocals being buried
0
Most Reliable Audio Gear Resources?