Is there way to improve R sound in audio?

If you need to get a sharper R on the audio track, to make it sound more Spanish. To make without selecting each instance or the sound. I.e. is it possible to apply some settings to the whole audio so that all Rs would sound sharper?
I think such settings can be application neutral, but just in case - preferably for Audacity.

In general, to lift consonants, you have to push back the vowels, otherwise things can just get 'fizzy'.

You could try this with EQ - lifting somewhere between 1 - 4kHz, but I think that's more likely to over-emphasise T's & S's than R's, resulting in 'fizzy'.

I'd go for a compressor - particularly a multiband compressor.
This will allow you to selectively compress vowels & pick out consonants without it all being too obvious it has been done.
R's are likely to be lower than T's & S's, so you could work around 800-1.5k without over-emphasising above there. If it's still hard to separate, you can even pre-EQ, so you hit the comps harder or softer at certain frequencies, then use the comp to also de-ess a bit if you get cross-over.

This is all far easier to do whilst twiddling faders than to try to explain in text ;)

It's hard to get a screenshot of this in action, so I wound up the comps really hard to try catch an extreme bit of compression… In 'real' use these curves are likely to be much less extreme & very fleeting. 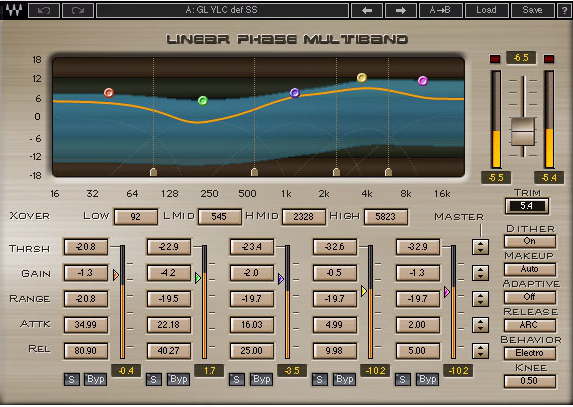 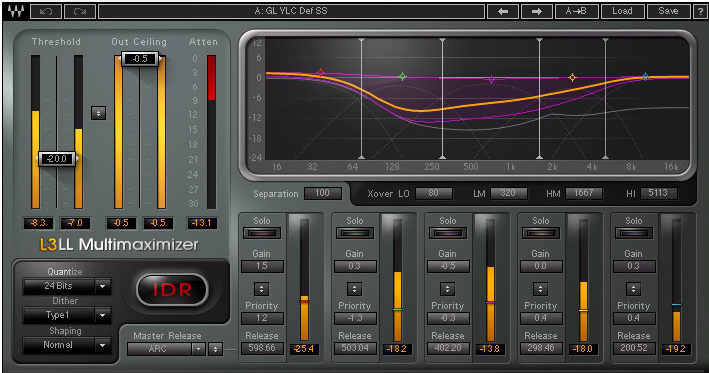 This is Waves' Linear Phase Multiband compressor & Limiter/maximizer, both doing a similar task in slightly different ways [though not simultaneous screen captures]. Not the cheapest available, but lovely to use & easy to visualise what's happening to your audio.

These settings are actually what I have on my HTPC 'home theatre' to keep speech nice & clean even when they're whispering, yet prevent car chases & explosions annoying the neighbours, which is why they're quite so extreme - they have to handle an entire finished soundtrack, not just a voice. The images were taken during simple indoor dialog, to give a better impression of how they reshape a voice track.

Not the answer you're looking for? Browse other questions tagged audio voice sound-editing voice-manipulation audio-restoration or ask your own question.

2
Linear loudness normalization in FFMPEG is in fact dynamic

19
Are there free records of separate piano notes in .wav files for instance?
2
What effects or alterations should I consider for clarity of audio in my video?
6
How to loop an engine sound so that it doesn't sound looped?
6
Export from garageband to audacity
1
Distort voice with free software?
1
Audio effect to transform a local language to a "foreign / weird language"
2
Fixing distortion and low fidelity on a re-recorded audio cassette
3
General/fundamental question about factors influencing audio quality