I am trying to optimize the acoustics of a room in my house for music listening. I use a computer that runs a free app called, REW (room Equalization Wizard) . This app can play a test noise through my speakers and simaltaneously record the resulting output and echoes through a calibrated microphone attached to one of its USB ports. I did some measurements and am getting some weird resonances. The speakers are 72" apart and the distance to the microphone is 72" as well (an equilateral triangle). The frequency vs loudness graph looks like this:

A 4 inch wavelength sound wave has a frequency of 3376 hertz. Maximum destructive interference would occur at difference of 2 inches from one speaker to the other and this is seen in the second turquoise graph.There is a dip at the expected region of 3400 hertz. But why are there dips at 11k and 18k as well? The wavelength at 11k is 1.29" and the wavelength at 18k is .75"

Moving the microphone 6" to the right results in 75" to L speaker and 69" to R speaker.

Can some explain why I get such a regularly distributed array of interference peaks across the frequency spectrum?

To rule out artifacts from the speakers I measured the frequency response of each speaker alone and the result was an almost flat curve (Revel ultima Salon2 speakers). To rule out artifacts from the signal processing chain, I reproduced these results using a mac laptop and sending the signal to different DAC. The space where this is being done has sound absorbing material on the walls (heavy curtains). The distance from the speakers to the back wall is 72" and the distance from each speaker to its respective side wall is 45". The room looks like this 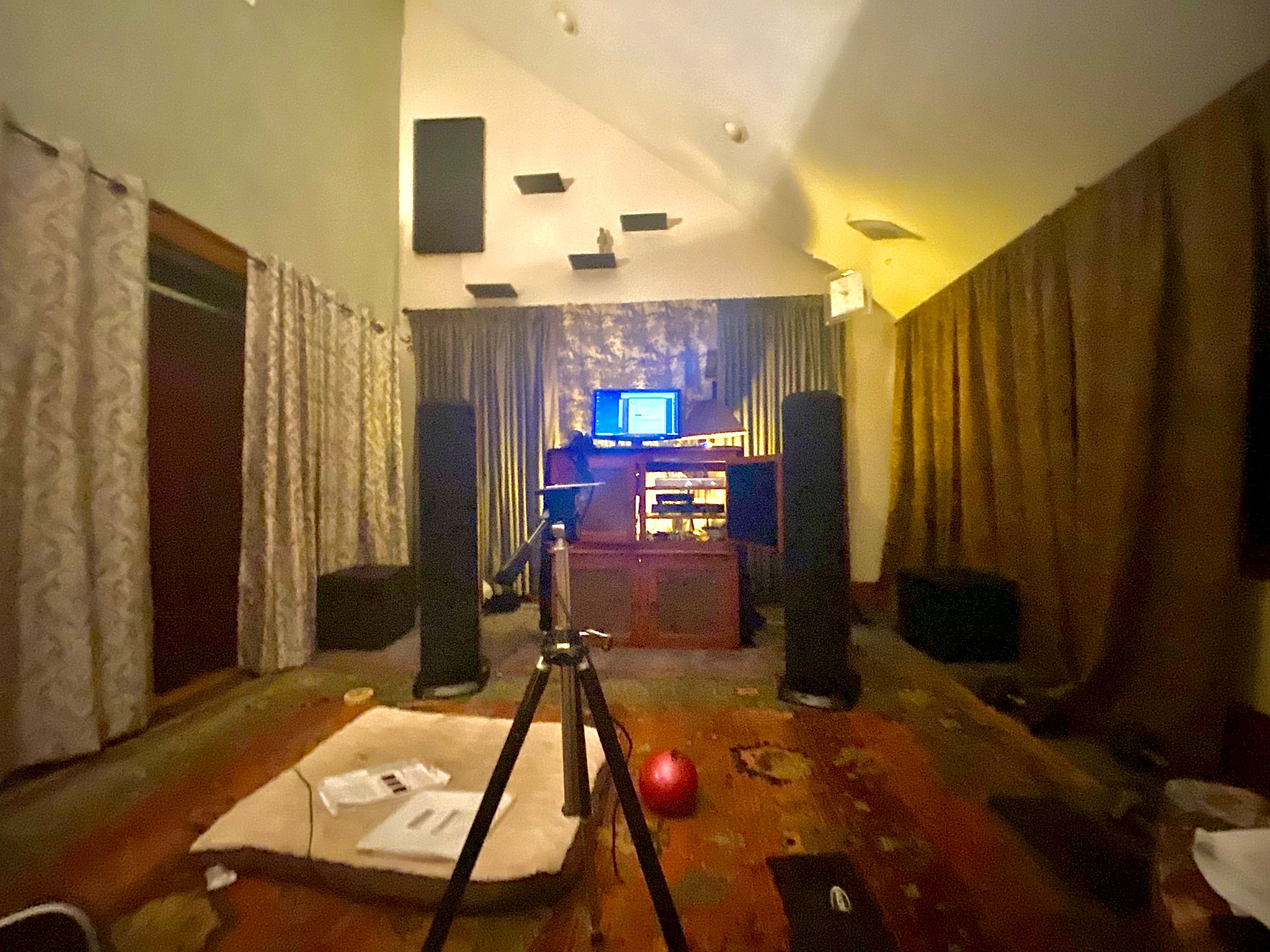 There is a double doorway on the left that opens to another room so no reflections can come from this wall. The combing pattern also occurs when I move the microphone to the left. If reflections were an issue, the asymmetry of the room would prevent the symmetrical appearance of the combing pattern.

I love this! Finally a hifi person that actually measures the most important part of the setup -- the room. Keep up that work!

Never mind the frequency plot when starting out with treating the room. Look at the waterfall plot instead. The waterfall plot displays the time it takes for frequencies to decay to silence over time. As your room is hardly acoustically treated at all you will have all kinds of reflections going on. It is these reflections that create the odd looking frequency response. And the response will be different in just about every place in the room. I had a room where moving a few inches could give a 20dB difference at some frequencies!

Note that the "heavy curtains" will have no effect on low frequencies, they only modify higher frequencies (simplified, starting from about the wavelength of the thickness of the material). I would start treating the acoustics of the room where it matters the most, starting with the below about 300 Hz. Once you have those reined in ( they are basically impossible to get perfect) you can start looking at the mirror reflection points from the speakers and add treatment there. A really good listening environment ideally has a "dead end" behind the speakers where most frequencys are dampened and a live end behind the listener whith diffusion breaking up the reverb.

The goal to aim for is to get it decently good for all frequencies and decently good in the volume where you listen ( not only in a single point ).

And no, you can not equalize the room with electronics.

Like Tetsujin mention in their comment, the "phenomenon" you witness at the plots of your measurements is called comb-filtering. It can be experienced every single time you sum up two signals with energy at the same frequency bands with one of them being delayed relative to the other.

Simply put, the path length difference between the two sources (or in general the delay between the two summed signals) introduces some frequency-dependent phase difference. If for example a 1 KHz sine-wave is the signal of interest, then by delaying one of the speaker's output by half its period (this is T/2 => 0.001/2, which translates to 0.5 ms, where T is the period) it would result in perfect cancellation. Now, since the two sources (speakers) reproduce the exact same signal, the delay is introduced due to displacement of the measurement microphone from the equidistant axis (the "head" is supposed to be placed on this axis in a stereo setup) normal to the loudspeaker setup axis. Depending on the distance from the speakers, some movement on the left or right of this "symmetry axis" will result in some path difference between the two speakers, thus, effectively introducing some phase difference between the two signals (one from each speaker) reaching the measurement sensor.

Now consider two signals with different amplitude but otherwise identical. When summed up with one of them being delayed then the magnitude of the summed frequencies will never become zero (since one of the signals won't be able to completely cancel the other) or twice the original one (the only way to get two with two signals is for both of them to have the same amplitude). This is what happens in reality since you will never encounter a case where the two signals will have the same amplitude. This is due to distance differences between the speakers (you are closer to one of those) and off-axis drops in sensitivity/response of the speakers. Thus you will never experience complete cancellation (although you will most probably get some values that are effectively equal to complete cancellation, especially if you take into account hearing mechanisms such as loudness contours, masking and amplitude Just-Noticable-Differences (JNDs)).

To conclude, I have to say that although you get some ripples in the low end in the first measurement they seem to show a pattern, which doesn't suggest standing waves. This has intrigued me since I would expect to be able to discern those in such a plot. Nevertheless, I am used at looking at plots with logarithmic frequency axis and I may be completely wrong on this one.

Finally, in order to get a better understanding of room acoustics and related phenomena you can refer to textbooks such as "Acoustics of Small Rooms" by Kleiner and Tichy, "Recording Studio Design" by Newell and for a more mathematical approach "Room Acoustics" by Kuttruff.

Not the answer you're looking for? Browse other questions tagged acoustics interference or ask your own question.

2
Acoustic Handlings in a Small Room
3
Why do I hear less bass in the middle of the room, and can I do anything about it?
2
Absorbing Room - materials, their shapes, what's the difference?
2
How to prevent PA system from sound interference
2
what is the purpose of the internal volume of a speaker cabinet
1
Reduce bass through wall to neighbour
0
cancel out audio in a recording with convolution, phase inversion
2
Effect of sound waves striking an object
1
What sound is best for measuring which frequencies a wall is reflecting?