I just got MXL 990 Heritage Edition, for recording guitar and vocals. However, when opening the box I saw the polar pattern on the box. It's something like this.

It doesn't fully resemble a cardioid pattern (which I thought I was buying). Does this make an issue for me, in a home studio (not sound isolated, but not the loudest place either). Should I switch to a complete cardioid microphone for best performance, or is it good either way ?

What I know cardioid pattern is: 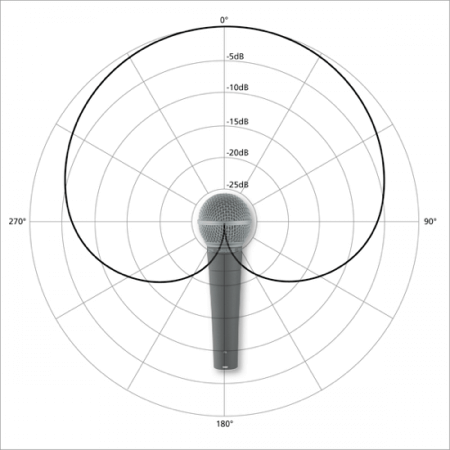 At this page you can find the microphones polar pattern and frequency response (the ones you provided), so you could have possibly found out before buying that the polar pattern is not a "perfect" cardioid.

Now, regarding to whether this polar pattern should be called or not a cardioid is somewhat debatable. Personally, I would call that hyper-cardioid but I am not the one that manufactures it. This being said, to my knowledge, there's no standardization on the naming of the polar patterns of microphones (definitely not of loudspeakers). Although common sense would lead someone to give the title "cardioid" to the polar pattern you provide in the second picture, nothing (apart from their will to follow what is the "unarchived" standard among the industry) stops someone to call whichever polar pattern they want "cardioid" just because to their eyes it resembles a cardioid! I might be wrong about the standardization, but you also have to keep in mind that most (if not all) microphones do not possess a constant polar pattern for all frequencies. Many microphones show a hyper-cardioid like a pattern for a wide frequency range despite being cardioid in the low frequencies. Thus, the manufacturer may have provided a "mean" polar pattern which is what you see (maybe not, I am just speculating here).

Now, whether this is appropriate for your environment is up to you, the environment, the time of day you record and whole other bunch of factors. In general, you have to keep in mind that hyper-cardioid microphones (and as I said the microphone you got seems to be close enough to such a pattern) have maximum Direct-to-Random ratio, which means that they provide the maximum "environment isolation" compared to the rest of the polar patterns available (and this is the reason they were first - and still are - used).

Thus, if you would like to get as much isolation as possible I would say try the one you already have and borrow a cardioid and have a couple of tests. Especially if you like the sound of your microphone I would suggest you stick to it and if you realise that you want more "isolation" try to find a couple of tricks to provide your room with it.

Not the answer you're looking for? Browse other questions tagged microphone audio-recording recording home-studio acoustics or ask your own question.