I want to record sounds of bees, bumblebees and other pollinators arriving, departing and flying close to a flower. These events will be then detected and insect species automatically classified.

An ideal setup should:

I have made sample recordings using Zoom H1 pointed directly to a flower from ~ 5 cm distance. I have struggled to record anything usable with the cheapest clip Hama MicroClip CS-460. 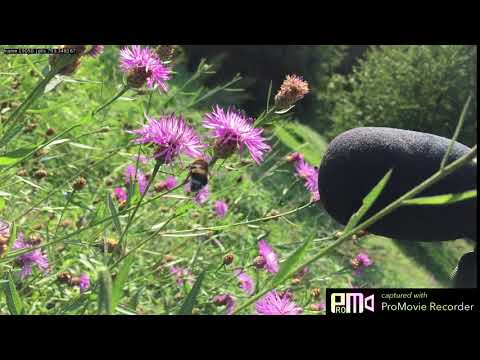 The used Zoom H1 setup is workable, but the final setup should be suitable for a crowdsourced effort. Most probably a cheap microphone plugged into a smartphone.

have you considered using a contact microphone attached to the flower stem? Some sort of mems super-minature mic? Polar patterns imply large capsules. Directional properties are obtained using passive filters which are physically large in respect to the capsule itself. Best to use a basic omni mic and achieve separation through proximity to the sound source. Forget using a directional mic for this - it will end up being too big for the solution.

To get this to work, you will need to train an AI with multiple examples of particular insects in different situations with different mics, on different flowers.

Not the answer you're looking for? Browse other questions tagged microphone audio-recording field-recording insects smartphone or ask your own question.

6
Creating insect-like voices for talking flies
2
Recording City Ambiance
0
lack of gain, Zoom H4n with Rode NGT2
2
Product recommendation: shotgun microphone for speech
1
How can I hear the sound during recording with a simple DSLR?
2
Low/distorted signals from headworn microphone
1
Record USB mic and Skype separately
2
Record the sound of a pipe organ in the church
0
How can I create a decent video conference setup with a standalone microphone and speakers?