How is sound recorded and reproduced?

I know and understand that sound = wave, based on this:

How can a recorder knows the difference between when I (say) sing "aaaaaaaaa" in C4 (@ 261.626Hz) and when I sing "oooooooo" also in C4 if both are supposed to draw the same wave?

Edit: If this question would be better suited on another site of SE, please let me know!

If all instruments, and all voices, produced pure sine waves, they would all sound exactly the same. C4 on a piano would sound exactly like someone singing C4.

Clarinet Waveforms has this image of the soundwave produced by a clarinet: 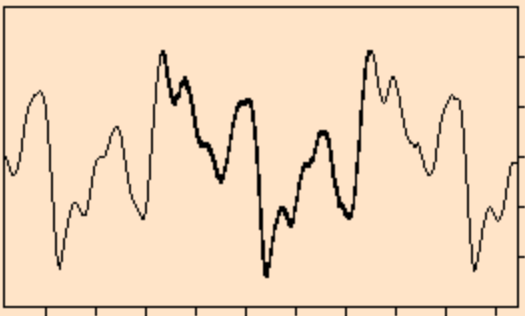 The bold section represents one cycle, which is repeated over and over, say at the C4 frequency. The wave is measured from the highest point to the lowest point and back to the highest point again. How long it takes to complete that one instance of the pattern determines the note's frequency.

Some other instrument would produce a wave form with the same wavelength and frequency, but with a completely different shape.

Both would be heard or measured as the C4 frequency, but they would sound quite different from each other.

At the gross level, two instruments will be heard as the C4 note, but the quality of each note will be different. Various higher frequency overtones add to the note to give it a distinctive jagged curve. It is that difference that allows us to hear the difference between the two instruments.

The shape of the soundwaves for voiced aaaaaa and oooooo will be different, even if they are both at the C4 frequency.

The answer is way more than just sound = wave.

The 'waves' you are referring to are waves of changing air pressure that impact on a small membrane in your ear. The ear membrane, through a mechanism so amazingly complex that to some people proves the existence of God, connects through nerve fibers to the brain. What we perceive as sound is the firing of neurons inside our brain.

Now, with that established, we can go back to your question. A recorder works in a very similar way. It has a membrane (microphone capsule/diaphragm) and a mechanism for turning the movements of the diapgrahm into electrical energy which is sampled and stored for later reproduction.

When the energy is reproduced, it is transmitted to your ears through the air by using yet another moving diaphragm (speaker) to re-introduce these energy fluctuations into the air which in turn are picked up by your ear and we are back at step one.

At no point in this process has there been any need to discuss exactly what you are listening to as this is not relevant to the recording process. This is only relevant when your brain processes the electrical impulses received from the ear.

Any perception of "aaaaaaaaaa" and "oooooooo" is a brain matter and entirely unrelated to the recording process. The recording device doesn't know and doesn't need to know.

The additional part of the answer is to say that your assumption that the waveforms are the same is not correct.

There is a significant difference between the waveforms produced when you say "aaaaaaaaaa" and "ooooooo". A sound is generally going to be a combination of many waveforms and the distinct components will have different amplitudes and phases. Whereas the 'fundamental' (lowest) frequency component may be the same, the higher harmonics will be much different and will have different phases and amplitudes.

7
How to reproduce any sound
5
Recording from Turntables to Laptop causes heavy distortion
6
How can I record my singing voice the way I hear it?
2
How to make recorded voice sound good
3
how to record two sources into a single audio file in Linux?
3
Audio Signal Difference Extraction
2
Recognition of timing information by sound device
1
How to record two people side by side?
0
Audio recording at wrong speed
0
Poor quality while using PC Output Playback as Microphone for Android Phone