Is it possible to record higher frequencies using multiple microphones sampling in lockstep?

I have only a basic understanding of audio, so this may be somewhat naive, but is it theoretically possible to record frequencies above what microphone allows by using multiple devices sampling in lockstep, i.e. assigning phases of desired frequency to each? Or is there a physical limit, like for example waves above some frequency not causing the membrane to vibrate?

frequencies above what microphone allows

Microphones have a frequency response curve. This is a random example: 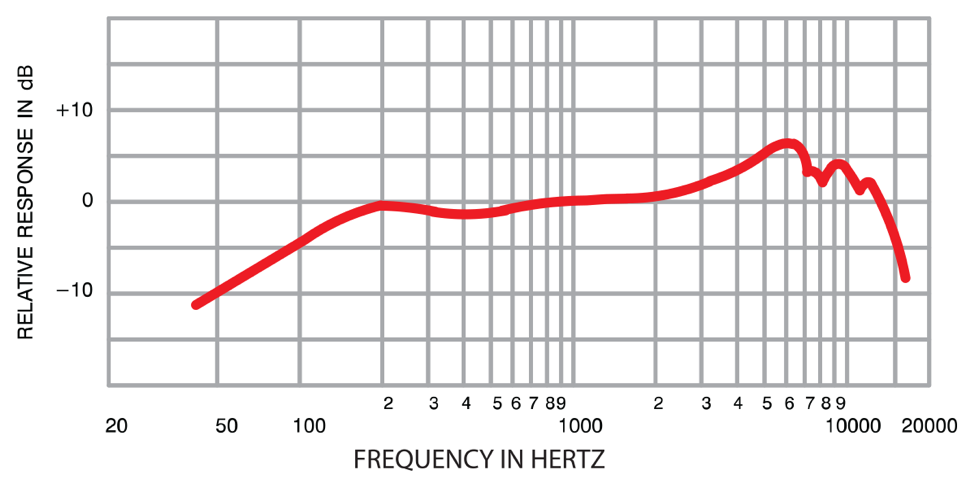 The exact shape of the diagram is different for each microphone, but they all have one thing in common: the response will be as close to flat as possible in the range we're usually interested in (20 Hz- 20 kHz for full-range audio microphones), and will roll off outside that range.

So there's no hard cutoff, but as the frequency gets higher, the microphone's output signal becomes weaker. This is due to the membrane, but also the electronics inside the microphone. Outside the frequency range shown in the graph, this roll-off continues, so pretty soon, the mic becomes really insensitive.

Any sampling occurs at the microphone output, so it has no way to avoid this response.

It may be easier to get a specialized microphone for ultrasonic applications, or you could switch to a laser microphone, skipping the vibration->electric signal step altogether.

Very simply put, no - this is not possible.

However in order to explain why this is the case it will be necessary to delve deeply into topics such as microphone design to a level that will probably exceed the constraints of this text box.

Suffice to say, acoustic microphones can be designed to work across a very wide range of frequencies however it should be understood that the capsule size has a direct relationship to the overall frequency response of the device at or around the point where the wavelength of the impacting sound approaches the physical size of the capsule.

It can be said that many microphones are designed to have as 'flat' a frequency response as possible and that it is easier to achieve a flat frequency response with an omnidirectional mic than it is with a directive pattern such as a cardioid mic. Mics that have a directional pattern such as a cardioid or super-cardioid pattern will exhibit a property known as proximity effect - which affects the lower frequencies of the spectral response - when the sound source becomes close to the capsule.

It must be said though that every type of microphone design is likely to have a different frequency response, which is dependent on capsule size, microphone design, directionality pattern and acoustic field. Many high-quality omnidirectional microphones will exhibit a flat or near-flat frequency response, however the response only tails off at the high end where the size of the capsule approaches the wavelength of the sound wave through the conductive membrane material that makes up the capsule.

Attempts to combine spaced microphones will result in comb-filtering at mid- to high-frequencies. There is no practical way to assign 'phases' of 'desired frequencies' to a particular microphone.

No. Audio interfaces have to protect against antialiasing and thus do not admit higher frequencies than half their sampling frequency. The whole point of a sampled audio signal is that it represents a complete analog lowpass signal independent from where the samples happen to fall. It's not that higher frequencies are only partially represented: they are not represented at all. Sampling two microphones but with a half-sample delay will yield different representations of the same lowpass signal.

Now let's assume that you omit all the anti-aliasing lowpass operation and ignore the aliasing problems we buy into this way. A microphone is in general an analog device with a frequency response. This frequency response falls off at higher frequencies. This does not change when using two microphones so there is no point in doing so: it just buys you uncontrollable phase differences (at 30kHz, one wavelength is in the order of 1cm in length). But of course you can sample the identical signal in an interspersed manner and the information will be exactly the same as if you sampled with the double frequency in the first place.

So there is no point in using two microphones, and by far the most feasible way to get double the sampling frequency is to use a single audio A/D converter designed for it.

The resulting frequency response will likely be lacklustre and may end up drowned in noise at the high end, but at least distortions are somewhat unlikely since those cause intermodular problems that would affect frequencies in the audible range. So microphones are likely robust against those: ultrasonic frequencies will likely only produce an ultrasonic response. Whether it is good enough to be useful for your purposes is just luck.

Not the answer you're looking for? Browse other questions tagged microphone sample-rate sampling high-frequency or ask your own question.