How do I record a piano, respecting the balance between treble and bass?

I'm a pianist looking to buy a (portable) recording device to record myself both in concert and in the practice room. Reading about the various kinds of devices on the market I noticed many recorders have a large drop in frequency response below about 70 Hz. The range of a modern piano goes about one and a half octave below that.

Are there devices on the market that have a reasonably flat frequency response down to 22 Hz or should I forget about that without buying one or more external microphones? And in what price range would I end up if I were to insist on a (more or less) flat frequency range between 22.5 Hz and 3500 Hz (if possible at all)? To what extent can the proximity effect (in cardioid mics) compensate for this?

I know I could somehow adjust the balance with mixing software later, but the point of me recording myself is to record what I actually sound like, not to find out into what I could make it with some software-artistry.

There's a whole lot of misunderstanding going on in your question…

… what's going to disappoint you still further is even when you get to the end of this rambling essay, you're still not going to have a definitive answer. That's because you could write entire books on the subject [& people have].

Firstly, though the lowest fundamental on a regular piano may be 27Hz, you don't really hear that even standing next to it. Right down at the bottom of the keyboard you are really hearing a lot of overtones & your brain kind of artificially constructs what the note appears to be.
There's a lot of 'cheating' going on in a piano to make you 'hear' the right notes.
Additionally, at the low end, you don't really 'hear' below 50Hz, you more 'feel' it. Directionality & pitch reference get very hazy down there.

Now we've got the bottom end of the frequency spectrum out of the way, what about the top?
Human hearing is theoretically 20-20kHz - though if you're over 18 that 20k is going down every day, especially of you live in a noisy environment. Let's call the 'useful' top end around 12k or so [it really gets less important above that, even though you don't want to intentionally throw anything away that could be perceived by someone].

Any decent microphone will have some reasonable attempt at picking up between 20 & 20kHZ. Some, of course, will be better than others… you pays your money you takes your choice.
… but that's not the whole of the story.

Microphones, whilst trying to be accurate, always actually impart some character to what they pick up. Cardiods additionally have the famous proximity effect.
Now, that can be handy when recording certain subjects - voice is the one where it is most traditionally used to good effect. Piano, on the other hand, not so much.
If you get your mics in close enough to the piano strings to start to develop proximity effect, then you'll only hear it on the nearest half dozen strings. By the time you're a couple of octaves away, it will not only be outside proximity range, but you'll barely be able to hear it at all, because of the inverse-square law that governs sound transmission in air.*

So, that leaves us with some distance between mics & strings. (Usually, but not always* - I did say this was complicated ;)

How much distance & which mics - cardioids or omnis? Where do we place them?

That's where I have to bow out & throw some links at you - there are just so many ways to do this I can't even begin to flesh them out in just a few paragraphs.

Coincident pair, crossed pair, A-B pair, mid/side… the list goes on & on. Each has its pros & cons, each could take you a week to learn even vaguely how to do. Part of your problem with putting 2 mics on what is a huge instrument is you can run into phase & mono compatibility issues - which is why I actually like mid/side, though I don't always even do that; sometimes I'll go with mid/side omnis, sometimes with crossed pair or even high/low cardioids [at opposite ends of the piano, similar to an A-B pair but inside the body].
You have to just keep trying things until you find what suits you, the room, the pianist & the music style you're currently working with.

This Sound on Sound article starts to penetrate just below the surface of a massive set of options & techniques. There's no substitute for actually trying them all…

DPA have a series of miking technique articles - quite simplistic, but included because their 4006 mics are my absolute favourites for many many things - How to mic a grand piano - it's written in such a way as you'll probably have to separately Google half of what they're talking about ;)

And one from Sterling Audio, just because it's got a video attached… some people like video guides rather than pages of text ;) - Mic'ing Grand Piano
*It also has an 'in the hole' option linked to my previous asterisks.

I hope I've done enough to at least get you started… though nowhere near finished. This is not something you can learn in an afternoon, I'm afraid.

I'm going to cut to the chase and keep this really simple for you.

Firstly, you don't really need to worry too much about the overall recorded sound in a practise environment as you should only be concerned with the overall performance and interpretation at this stage.

So really we need to discuss the recorded sound either in a recording session situation or in a live concert performance situation.

There's lots of information 'on the internet' about how to mic up a piano. Most of it is crap. What I will give you is information on how to mic a solo classical piano. Not chamber music, not jazz, simply solo classical piano in a suitable acoustic. What I mean by 'suitable' is an appropriately sized venue with a reverberation time (RT60) of between 1.6 and 2.0 seconds (roughly).

My personal preference for recording in this sort of situation is a pair of spaced omni-directional mics (such as Schoeps MK2s or DPA 4006). In particularly reverberant environments I will use Schoeps MK21.

Positioning is the key.

The mics should be spaced roughly 10-12 inches and positioned at a height of roughly 6-8ft and at a distance of approximately 10-15ft from the instrument.

The measurements are rough as they are guidelines only. You will need to use your ears to tune the final positioning result. You are going to be listening for bass/treble balance along with an absence of hammer, action and pedal noise. 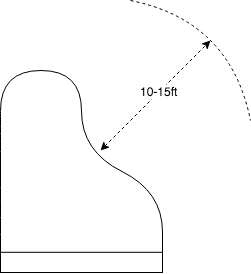 In terms of frequency response, the vast majority of professional recording devices will cover 20Hz thorough 20kHz which is more than enough.

The amount of energy generated by a piano at 20Hz is negligible, but having said that, you should be looking at professional equipment for doing any releasable recordings and this will ensure you are not running into any frequency attenuation issues.

Most good quality omnidirectional mics (schoeps/DPA) will exhibit a flat frequency response. There will be compensation for free, diffuse and direct field options which results in high-frequency lift if using diffuse or free field mics. For recording piano, you are working in a zone that is between direct and diffuse fields so a flat or slightly lifted high frequency response is ideal in this situation..

Not the answer you're looking for? Browse other questions tagged microphone audio-recording piano frequency-response or ask your own question.

6
How to cleanly punch piano?
1
What equipment do I need to record the audio from my piano keyboard?
5
How can I record piano on a laptop without high frequency wahwah?
2
How to make recorded voice sound good
5
How to record classical piano with one microphone?
1
Troubleshooting gain problems between microphone and amp
1
How can I record sub-bass frequencies?
3
Using EQ while mixing to compensate for frequency response of monitors/headphones
1
Mic to record an audience of 20 - 30 people?
1
What is the best way to mike a grand piano?