My setup is as follows: I have an Audio-Technica AT2035 microphone connected to a Focusrite Scarlett 2i2 USB Audio interface, which is connected to my computer (Microsoft Windows 7). I use Adobe Audition 11.1.1.3 to enhance my microphone audio quality in real time: the input of Adobe Audition should be Focusrite Scarlett 2i2 USB Audio interface, and the output should be a virtual audio cable that I can route to Skype/Dragon NaturallySpeaking/any other programs where I need to use the microphone.

My current Adobe Audition configuration is as follows: 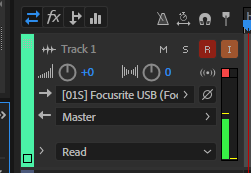 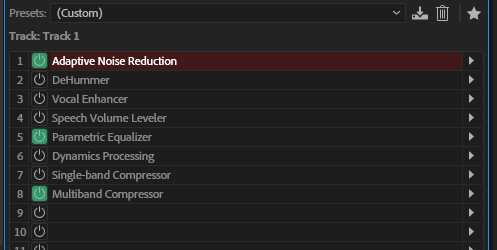 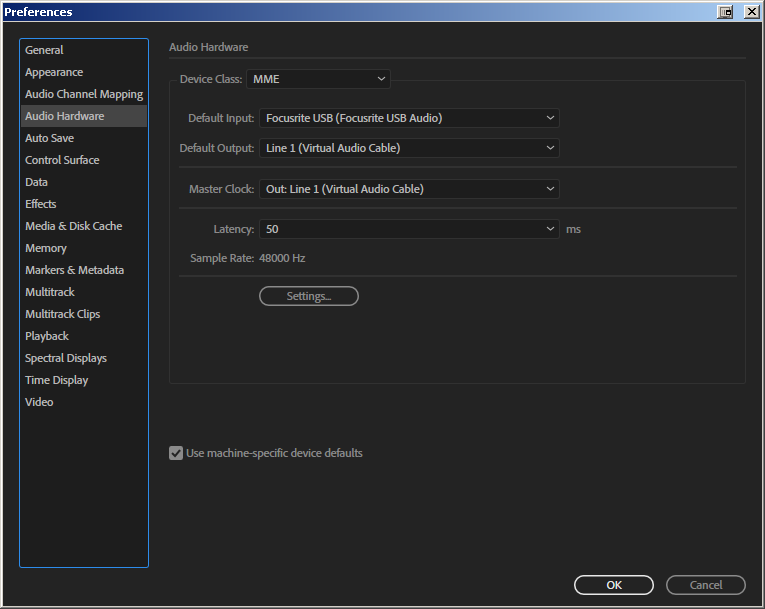 Even though the latency is configured to be 50 ms, in practice it is much higher (>300 ms), even if I disable all effects. I understand that MME seems to be notoriously slower than ASIO, however I cannot configure the output to be a virtual audio cable when using ASIO in Adobe Audition on Microsoft Windows.

Another issue with using MME that if for some reason the CPU gets busy with some other process, one might experience dropout when the specified maximum latency has been reached. E.g., the figure below shows the soundwave for the same word ("testing") when the CPU was quite busy on the left (resulting in dropouts) and quite idle on the right (resulting in a clear voice).

Am I supposed to use ASIO, and therefore configure the output to be the Focusrite Scarlett 2i2 USB Audio interface, on which I would connect the monitor's jack output to my computer's sound card? That doesn't seem neat.

The configuration mentioned in the question contains 2 issues that account for the latency.

Issue 1: use ASIO instead of MME, as MME has a notoriously high latency (in addition to the audio dropout issues if the specified MME maximum latency is reached) whereas ASIO drivers were designed for low-latency. It is possible to use ASIO on Microsoft Windows, see Can you use ASIO input and a different output?. That removed ~200ms of latency.

Issue 2: I don't know why but when one disables the audio effects in Adobe Audition, it still seems to compute the effects. This means that disabling the audio effects doesn't decrease the latency. In the effects mentioned in the question, the effect that had the highest latency by far (caused >80% of the effect-induced latency) was "Speech Volume Leveler" (even though it was disabled). Removing "Speech Volume Leveler" further decreased the latency by an additional ~200ms.

The following screenshot show a proper configuration to achieve low-latency. 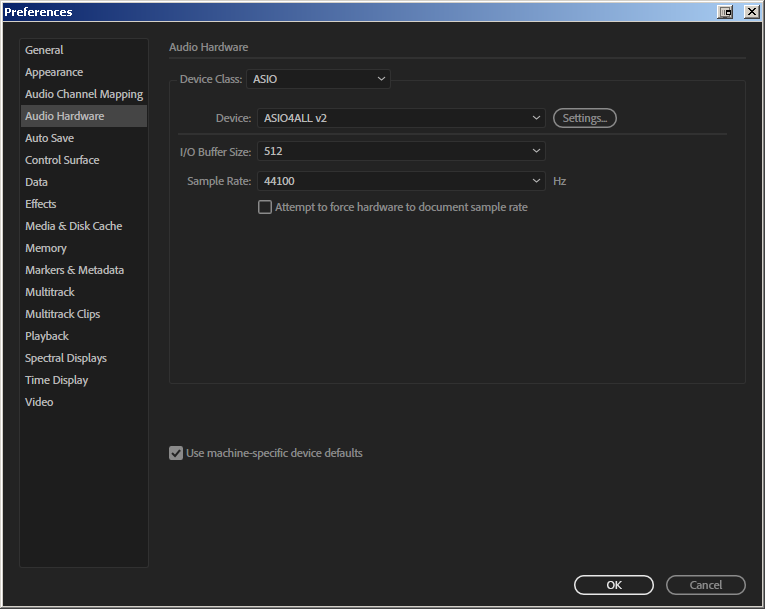 3) Specify the track's input, and enable R (Arm for record) in red and I (Monitor Input) in orange: 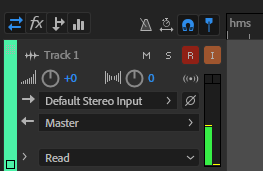 The following screenshot shows 2 soundwaves and 2 cue points in Audacity: the cue points represent when I started uttering a test phrase (in this case, I pronounced "this is"), and the soundwave comes from Adobe Audition's output. In other words, the time elapsed between each bar and the beginning of the soundwave represent the latency between my microphone and Audacity, while the signal is going through Adobe Audition. The left soundwave and cue point are before fixing the issue. The right soundwave and cue point were recorded after fixing the issue. The latency went down from ~500ms to ~50ms.

3
how to get rid of a loud buzzing noise when I try to record?
1
Is the Focusrite Scratlett 2i2 and Rode NT1 Kit mic a good starting set for podcasting?
2
Condenser Mic - Constant white noise (hiss), can't get rid of it
0
Focusrite & latency & drivers & Win vs Mac
0
Fixing recording issues with Scarlett 2i2 / Procaster
1
Can an audio interface's gain control mute the input source?
0
How to choose the latency for the audio hardware in Adobe Audition?
0
How to configure the output to be a virtual audio cable when using ASIO in Adobe Audition?
0
1/8" Headset to XLR