What's your approach to being creative?

When you watch a film with temp editorial sound or read a script or look at the artwork/pre build material of an upcoming job, how do you make audio based decisions?

Do you have a structure or flow of thoughts/questions that you ask yourself or do you go with what your mind hears instinctively?

Of course, the brief will play a role in influencing your thoughts.

It would interesting to know how each of us approach the creative process.

Despite the trees not liking it I tend to print out scripts so I can scribble notes on them & tag them with small post-its, coloured coded based on content. At a glance it means I can tell how much of each element there is which can be crucial when scheduling/budgeting etc...

The first time you get to watch the cut is CRUCIAL - I can't understate how important it is. You only ever get one first impression and your instincts are often based on it. That first screening should occur with no distractions...

Once we have QTs of the first cut I tend to use ProTools markers a lot, to mark up scenes & I use the comments field of the markers to tag the critical sounds TO RECORD.... thankfully PT markers can be conformed as new cuts arrive....

The other thing I have learned is to take your first attempt at a scene seriously - some times the initial shape & ideas that go into that first attempt will make it to the final mix (refined obviously) - if your instincts are good they should be treated carefully & trusted... 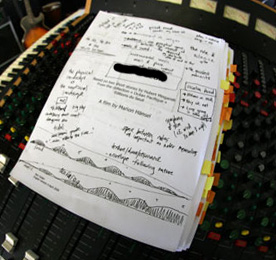 I generally believe that creativity stems from technical mastery, so I'm always working to make sure I know how to do the things that I would like to do. I also spend a lot of time recording and cataloging, so that I can have a deep and high quality set of tools to use when it comes time to make sounds happen. Then once a project comes in the door I'll record some more.

Given all of that, here's my process:

(As an aside, I've found reading screenplays to be kind of hit-or-miss with regards to sussing out non-obvious context for sounds. I recently completed a film where in the screenplay the main creatures were these electrical eel kinds of worms that pre-empted their strikes with this sparking crackling sound. The director never really signed off on any concepts that I sent before seeing VFX. Once the VFX came in, I found that the creatures weren't electrical looking at all, so I ditched that aspect of the design and went straight organic. The director was very happy with the end result - which included zero electrical sounding elements.)

When I am preparing for a work, I usually watch it or read it over and over and note down "keywords".

It generally saves a lot of time to search my library with a proper list of keywords like "dark, foggy, futuristic, anxious, etc." Then I usually discuss these keywords and the project with the director. This I think is the most crucial step before you begin doing something in the wrong direction.

Some directors wants to play safe and some of them wants to push the limits and be experimental. An important part of my preparation goes to understanding this attitude of the directors so that I can shape my audio plans upon that.

Where I work I have yet to be given an opportunity to speak to the Director. I also have someone above me in our hierarchy who is responsible for the sound from a creative point of view. He doesn't actually do any of the work, but it is responsible and approves all the work before clients hear it.

So, today I've been beefing up some tracklay to make it all sound a bit more interesting (cooler too?). I'm the dialogue editor and mixer but am pretty much given carte blanche to do as I will as the results are usually liked during the review where the Director will be present.

I think as one progresses and gains more of a reputation you are given more freedom to do as you please.

I'm not sure about temp sound effects. They can be useful as a guide for something to be at a specific place but they are usually full of very bad sounds that are thrown in just to make the show more alive but with little thought if it's actually any good.

Not the answer you're looking for? Browse other questions tagged creativity techniques planning creative-inspiration or ask your own question.

4
Getting past your sound design “writing blocks”
3
How creative can you be as a working sound designer?
6
How to approach M&E Mixing
6
Listening to your own work.
1
Planning process - What's your workflow?
3
Creative Spaces
3
Kill your plugins
0
Planning your projects?
7
Inspiration - What influences your aesthetic
2
Overcoming periods of Creative Block