How to use Aux send/return on Jeskola Buzz

I'm trying to figure out how to use the auxiliary sends and returns on Jeskola Buzz which is the worst documented piece of software I have ever used (although that gives me that feeling of exploring unknown territory that I love).

I have set it up as shown in the picture bellow. 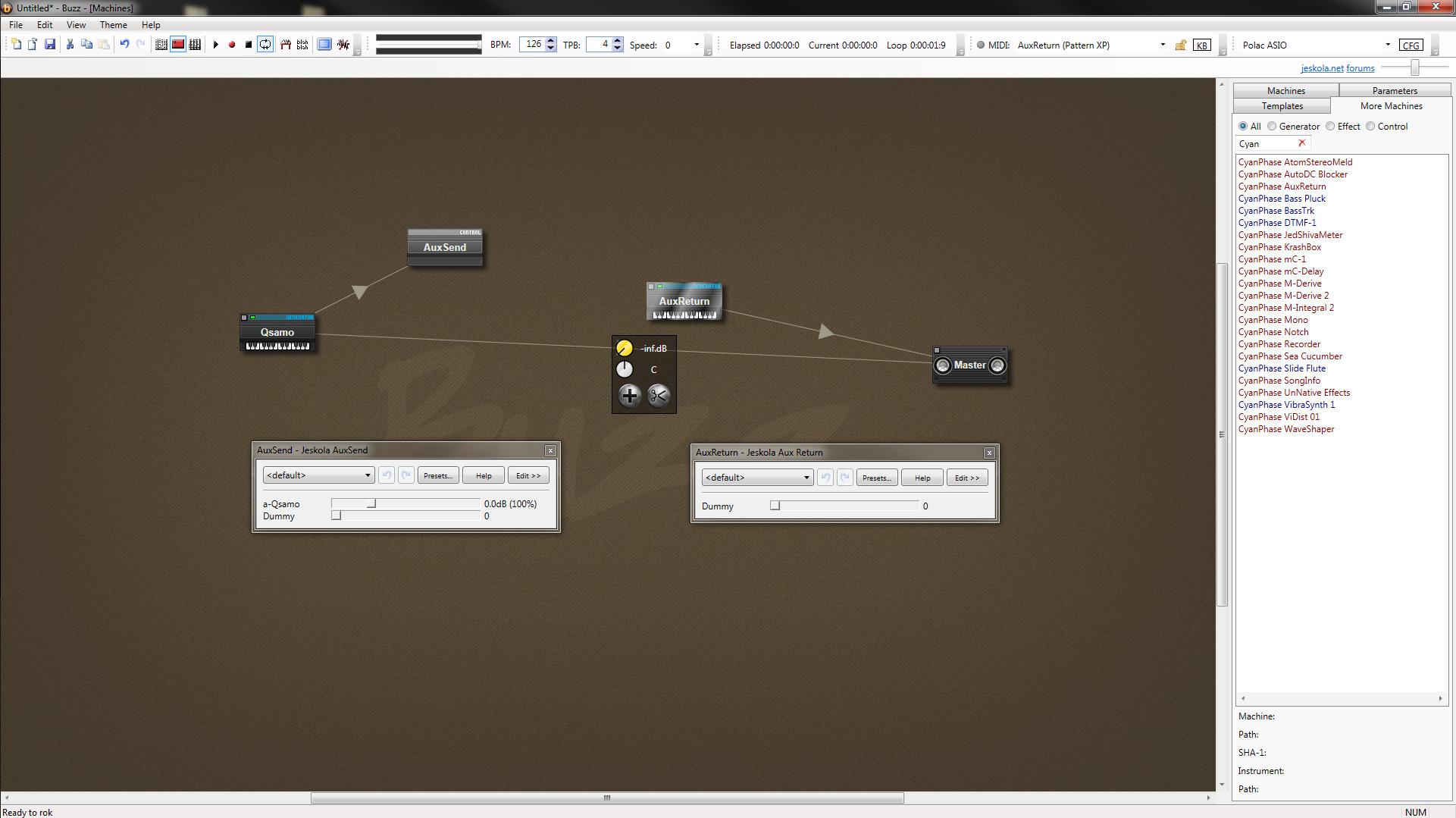 I have a synth (Qsamo, receiving MIDI) going to the master (just to check it's working prior to testing the aux) and also going to the AuxSend machine. An Aux return machine is connected to Master.

I would expect there is some way of connecting the Aux send to the return since you can have multiple instances but the program does not allow me to draw a wire and I haven't found anything in the menus. In addition, the program won't allow me to connect an effect to the aux return.

How do I connect them?

If I'm using these machines wrong, what is the proper way to use them?

P.S. The program itself gives many alternatives like sending multiple sources to an effect and returning the effect to master but I get a feeling that I'm missing something here.

I did a quick 'google' on the subject and found this, (I think this will be more use to you than my original answer)......

This may be totally wrong, but I have 'fiddled' with Buzz in the past, so.... The AuxSend module is a 'Control', (Top RH corner of module image.) This should allow you to control the %age of the signal, (from Qsamo, which is a 'Generator'), that is sent through to an Effect. The oddly named 'AuxReturn' is a Generator, which is why you cannot connect through. (Delete it if it is of no other use). Drag an Effect onto the screen, (Echo for instance), and then try to connect the AuxSend to it - it should connect then, (I think :-/!!). Right-click AuxSend, and some controls for the Send should pop up? Again, I think, you can then drag a connection from the Effect through to the Master. If it wont connect, try putting a Mixer onto the screen, and dragging a connection from the Effect to the Mixer, and then connect the Mixer to the Master...... As I said, I may be wrong, but it's something like this. Hope it helps :)

Not the answer you're looking for? Browse other questions tagged software daw aux-sends or ask your own question.

8
What is the purpose of an AUX return?
2
Which cable should be used in paired AUX sends and return on mixer?
3
How to get AUX send mono signal converted to stereo?
1
How to send different mix to 3 seperate headphones?
0
Can FX send be used as an extra AUX send on mixer?
3
How can I send internal FX to monitors on a Behringer mixer?
2
Should I use filter and compressor in FX Channel (aux send) in Nuendo?
0
How to connect mixer's mono aux send to stereo input of FX unit?