So would it be true to say that compression only reduces the dynamic range of a signal if the loudest part of the signal doesn't happen before the compressor kicks in (due to a slower attack). Because in this instance it would appear that the Perceived dynamic might actually be increased because the gain of everything other than the peak will be reduced) which might well be a desirable effect in the case of a kick. 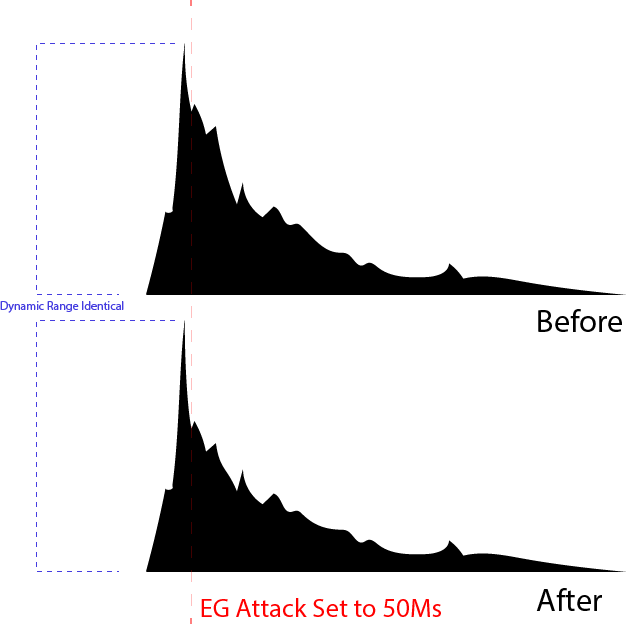 You should consider that any signal is a combination of different frequency components all across the spectrum. Each of these components will have a differing amount of energy and will affect the attack trigger in a different way. For instance with a Kick drum, there is likely to be a lot of energy in the high-frequency part of the spectrum that may well sneak past the compressor due to a long attack delay. Consider experimenting with multi-band compressors with different attack and threshold settings. See how they behave in this context as opposed to using a single (c1) band compressor.

One part I will respond to is where you said that it shouldn't change the signal if the attack doesn't catch the transient fast enough. But you have to think of that threshold as a trigger. Once it is triggered, it will act.

So in your example:

Compressor starts to slowly clamp down (transient has passed by now)

Different compressors work differently, but there are release times that also effect how quickly it stops attenuation.

To respond directly to this: "So would it be true to say that compression only reduces the dynamic range of a signal if the loudest part of the signal doesn't happen before the compressor kicks in (due to a slower attack). "

False, once the threshold is passed, the compressor begins it's cycle, and will attenuate the following signal, which may or may not be above the threshold.

Hopefully that clarifies that point.

Not the answer you're looking for? Browse other questions tagged compression dynamics or ask your own question.

8
Step Compression: Do you use it?
2
What's the best ubiquitous format for compressed voice audio?
1
Approximate the Sound Forge “RMS Normalize” function using Sox?
3
How is compression quality related to sample rate?
3
Can compressed music files be adequately recovered by remastering?
1
How do I eliminate (or reduce) the dynamic range?
1
Why does compressing a kick drum make it sound punchy and louder?
0
The function of attack,release and threshold in a compressor