How do 8 tracks get recorded on a compact cassette?

This is a common misconception about tapes and tape recording.

Tape is a magnetic medium and it's not divided by anything.It's particles are (at first) scattered and unordered.

What dictates the channel count is the recorder tape head.

This is a basic example of how the tape recorder works:

So for example let's say we have a 2 inch tape.

And let's also assume we own 2 machines.

That means that both machines are loaded with the 2 inch tape but the first will record 16 channels and the 2nd will record 24 channels.

After one machine has recorded let's say 16 channels (MCI) we can then easily take the tape out of that machine, load it in the studer and record 24 channels (16 previous are overwritten of course).

This is as far as recording goes.

For the reproduction there are the same number of channels in the "Repro" head.

Both heads must be aligned very well so there are no repro and/or recording problems.

So as you'd understand by now , a cassette is a tape only 1/8" width but it's the exact same technology as the 2".

On the "normal" cassette decks this is what's going on: 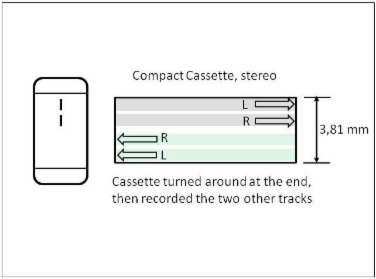 A Revox Tape head of 16 channels: 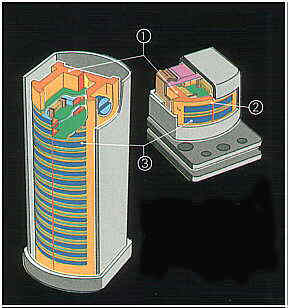 So you might wonder why we can't record 24 channels in a 1/8" cassette. Well , first of there are physical limitations. Also the tape would have a lot of crosstalk as one channel would affect the other because of the very small channel width. And lastly there would be too much noise, this is why smaller tape formats use denoisers as a standard , The 488 example uses dbx denoiser and others like Fostex 250 uses the Dolby S.

But as we discussed before a lot of these depend on the machine! There are larger format machines that have crosstalk and vice versa.

Other formats like 16ch 2" , or 8ch 1" are considered simply as the holy grail of recording as they help by offering great depth , dynamic range , headroom and noise characteristics.

So keep in mind that for the most part , the machine dictates the outcome, the tape is just a medium that the "data" is saved if you will.

Not the answer you're looking for? Browse other questions tagged audio-recording multichannel tascam or ask your own question.

4
How do I record songs straight from a vinyl record to a cassette tape?
5
Individual performing complete band performance (eg rock) by sequentially recording each instrument
2
Zoom H2, any way to balance the stereo?
1
Record more than two external mics with Tascam DR-40 into separate tracks
2
How to record on a smartphone using XLR mic and guitar simultaneously?
2
How to hook up my Win XP laptop (w/ Audacity) to a cafe's Mackie 1604 soundboard? How to record individual tracks through it?
2
What are the definitions of a track and a channel?
0
Background sounds get picked up only when I talk by Tascam DR-07X even with low-cut filter
1
How is sound recorded and reproduced?
0
Best way to convert cassette tapes to digital files on a computer with minimal quality loss?