Is it possible to fake decimation with FM?

I wonder if this effect can be also achieved with Frequency Modulation (or Phase Modulation)?

(This question intrigued me, so I though I'd try it out for myself and write a full explanative answer)

Phase modulation is often used as a step in the process of frequency modulation, so they are in fact, closely related.
If we look at frequency modulation and the effect it has on a signal, it is plausible to assume we can indeed, create a sample & hold process by applying certain parameters to the FM process. Just for fun, I'm going to attempt to create such a process using Reaktor, and explain the process as I go.

So the theory is, given that with FM, the frequency of a carrier signal is modulated using the amplitude of the modulator signal(i.e. deviation), We can attempt to create a square wave modulator with a peak amplitude that would, in the positive domain, cause the carrier to proceed unaltered and in the negative domain, give zero frequency, and therefore, no change in amplitude. This should resemble a S&H type process. I think. The trick is finding the correct parameter values.

Step 1: I created a S&H module in Reaktor as well as a simple FM module, using a sine wave generator(carrier) and a square wave generator(modulator). I also added an oscilloscope to visually display the output signals for comparison.
Step 2: I tested the output of the S&H module to give us an idea of the output we are attempting to recreate using FM.
(click to view full res images) 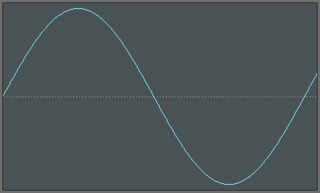 A beautiful sine wave, as used in all tests 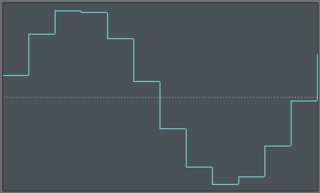 We can see here the expected stepped waveform created by the S&H process; this is what the output from the FM should resemble if we are to be sure the process has worked.

Step 3: Using the FM module, it's time to test the theory, modulating the frequency of the carrier with the amplitude of the modulator. I set the modulator frequency to 2400 Hz, the same as the S&H reference clock, and adjust the deviation to attempt to hone in on the desired wave shape. 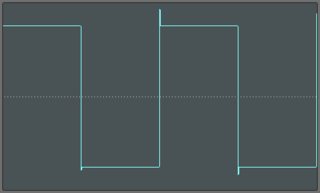 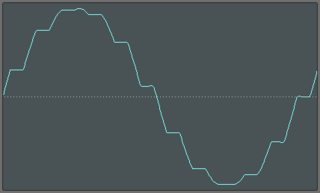 UMM... As we can see here, my theory kind of fell through... Why? Because I didn't think it through. Now I see it is obvious that at the positive peak, the waveform will carry on as normal; meaning it will form the next part of the sine wave, not a near vertical jump as I'd first assumed.

So is that it for the test? Well, no. While I thought that adjusting the modulator waveform was the key to moving forward, I couldn't work out in what way it should be changed. While fiddling around I adjusted the width of the square wave generator, which is actually a perfectly symmetrical pulse wave, and something interesting happened... The waveform began to resemble the S&H reference waveform! So with some precise adjustments.... 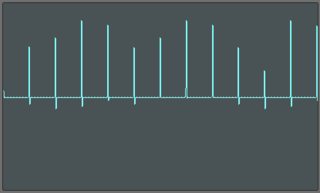 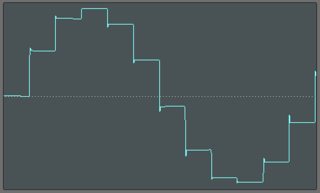 That's a lot better. It's clearly similar to the S&H reference signal which is great. We can remove some of the 'ringing' at some of the sharp edges with a high cutoff low pass filter: 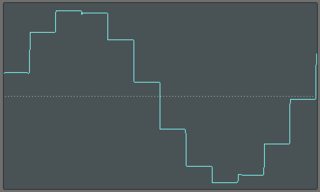 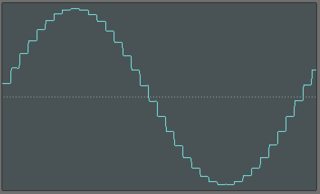 So it definitely works, the clock frequency adjusts the step size as it should. So the only thing left to do is a little refinement. I think we could refine this further with shorter pulses, higher deviation and by filtering the modulator rather than the output. 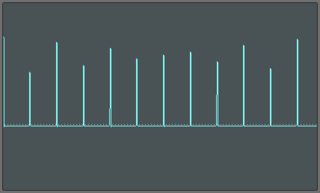 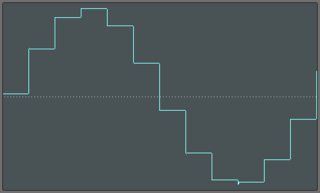 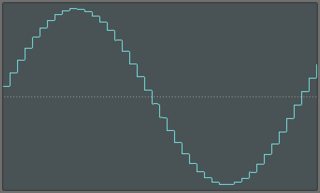 So Why did this work??

Well, it's kind of hard to explain but basically it works because the sample rate cannot correctly represent the very high frequencies the pulse demands from the carrier, so instead, we get a simple, clean jump to the next part of the carrier wave, which, as we can see from the pulse waveform, is modulated to a near zero frequency wave, hence a horizontal interval. This gives us near perfect steps.
...and yes, it sounds almost identical to the S&H reference signal.

I could go on for hours about this, like utilizing the clock oscillator, but I'm going to end it here with our successful recreation because, after all, the OP's question has been answered. I appreciate it if you stuck with me and read this far. For people like me, this is interesting stuff but for others, it's probably a bit dry. I thought for clarity, I'd add one final image, which is an image of the instrument I built for this test in Reaktor. 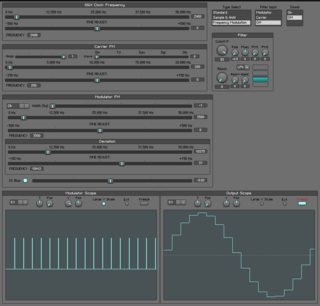 Not the answer you're looking for? Browse other questions tagged sound-effects sample-rate or ask your own question.

2
Ever managed to fake the Autotune effect?
4
Why do some companies still sell SFX with 44.1 kHz sample-rates ?
8
How is it possible to hear something at 44.1Khz?
9
WAV file recorded with wrong header
2
Is it possible to record a short contained sound no longer than 60 milliseconds?
2
Is it possible to record higher frequencies using multiple microphones sampling in lockstep?
0
Why does increasing the sample rate with SoundForge make the pitch go way up?
2
Mixing audio with different sample rates
1
How to Reduce Latency with ASIO driver?