I'm using M-Audio M-Track Eight (as an external sound card) to play and record an audio file to a device from a Windows7 PC. Right now, I'm able to use only 4 input and 4 output ports for playing and recording. Softwares like audacity show only paired up ports (1/2, 3/4, 5/6 and 7/8). The following are the screenshots of the same:

Any information, advice or leads would be of much help. Thanks in advance!

My initial thought was, does it matter really? Because you can separate the stereo tracks after recording, you hinted to this in Q1. If you run two (unrelated) mono tracks through a stereo stream, then you still have two mono tracks, i.e. Q1; it makes no difference. But you can record mono inputs to mono tracks in Audacity, if this is what you want.
If you are recording from Audacity to a recording device, then it's simple; you can map each mono track to a different mono output from the track's dropdown menu.

I'm not really clear on how you are using the device. I would need to know more about what you are doing to advise you further.

Update: I now realise that the problem is the OP can only output a stereo mix from Audacity when they actually want 8x output channels to route tracks to simultaneously. But Audacity only has a stereo output mix, as is discussed here. I suppose this could be changed by anybody with the know-how, as Audacity is open source software.

So a software upgrade is needed for the OP. The standard routing capabilities in most professional software is 32 input and 32 output channels, as is shown in Magix's Sound Forge Pro 11: 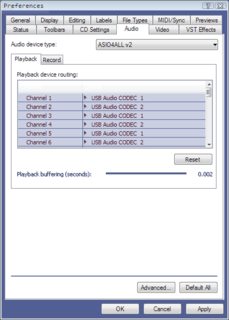 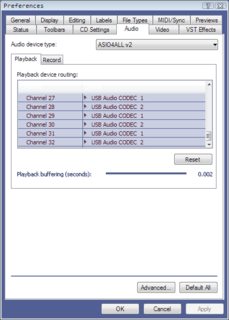 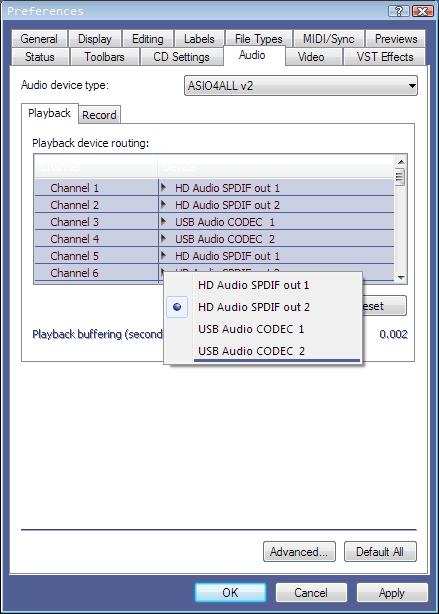 This is what you need, but in stereo mix software like Audacity, instead of 32 channels you only get 2, so you can only map the output channels to left or right(Channels 1 & 2). This is why your eight outputs are only selectable in pairs.
So simply put, you can output to a selected pair:

I don't know of any free or open source multiple output audio editors, I only use Audacity to sample/capture software audio, which it's really good at.

So, in summary you need an audio editor or DAW with multichannel support throughout. Simple to find in a paid, professional application. A lot harder to find in a free or open source application.

Not the answer you're looking for? Browse other questions tagged audio-recording automation m-audio or ask your own question.

5
Recording from Turntables to Laptop causes heavy distortion
2
How can I simply record, edit, and export one track of V/O?
3
Recording electric guitar with+without effects
0
How can I setup my M-Audio soundcard on Windows for multi-track recording?
0
Recording setup for a podcast
2
How to I properly reduce the voltage intended for a speaker to a level appropriate for Mic input?
0
Is there an easy way to mix headphones and mic into one output for recording purposes?
0
10-15 dB lower input audio level on audio interface than output level on source
0
Iphone listen through headphones while recording through its microphone?