When we open up a song in an editor we see a wave track, if we zoom it we see that it's curves and bends at different places and etc. I wonder if it's possible to draw music this way? Theoretically i think it's possible.

If we record a note and look at its wave sample we can see what it looks like. If we try to draw an equal wave sample and play it, will it be the same note?

One more thing: i've noticed that if you play another note on top you get almost the same image but with just a slight change. Does that mean that even a small curve can change everything?

Music is interesting because people can make musical expressions instinctively and in real time. A decent violinist can just think a tune and translate that thought into sound because (s)he has practiced to the point where the motion of the bow and positions of the fingers are second nature. This is directly related to the means of data input (the bow and the neck). If someone could master a wave-drawing interface to the same degree that someone could master a musical instrument, your idea may have merit. I doubt it is possible.

Now, for very trivial pieces, e.g. John Cage's 4'33" this procedure would work quite well, because the waveform is trivial (in the case of 4'33" it would just be a flat line).

However, for any sort of interesting music, this approach would yield problems for an ordinary human being who cannot do the necessary math in their head. You would need the ability to do all of the following:

This seems way too complicated for anyone to be able to generate anything other than purely abstract music. If you are trying to get from a musical idea to a musical sound, this would probably be the worst way to do it.

Yes, you are absolutely right. As a matter of fact, in many simple audio editing programs (my personal favourites are Logic and Audacity, depending whether I'm using my Mac or my Ubuntu), it is very simple to draw a simple wave, zoom in, and grab and move the individual points of the wave to the point which you want.

Because the sound is indeed totally represented by this analog curve, it is (as you suggested) possible to draw the exact wave you want in just about any audio editing program.

That being said, generating the exact wave you want is an extremely long, tedious process: to draw a second or two of sound exactly how you want it (depending on your skill level) could easily take an hour or two.

You are 100% right. You can at least theoretically draw your own sound waves (with much difficulty), and, yes, even an apparently small change to the curve can make a huge difference, as you suggested.

an attempt at a simpler answer...

what audacity is showing you is the sample of the whoooole song jammed together in time. every sample for every note (of every instrument) has already been mixed down into ONE wave. This is the wave your speaker plays out.

So showing music this way is a terrible idea. A human can't separate out which note of which instrument is being played. A computer even has a difficult time doing this. Especially with reverb and lots of instruments involved.

Music needs to show which instruments are used and which notes are played on them and when. Etc, etc, etc.

So at the point of it going out the speaker, everything has been mixed together and it's too late to see which notes are involved. At least, you know, easily.

And there's ENOUGH going on playing music. Making it simpler for the instrumentalist is a high priority. Hence, the music notation we have.

Well, not really - when you're looking at a waveform, you're seeing a zoomed out summary of the data on disc. If you zoom in, you'll see many more details and gradations that you couldn't tell from far away. It's kinda like trying to describe all the beaches of California, in detail, by drawing how the coastline looks on a map of the U.S.

If you zoom really deep down you'll get a more accurate picture, and yeah it would be possible to create music that way - but drawing at that level would be extremely tedious and time consuming and likely impossible for the average human.

To understand why - it'll help to do a little napkin math to get the possible variations, and we'll see that they become too enormous over the time of a song (and what is music if not creative choices over time).

That said, there are a number of other alternatives which allow you to "shape" the waveform in larger sections without being so brutal. For example - you could have two sine waves of different frequencies and/or amplitudes and/or phase, and add or subtract them... this is a whole other topic of things like additive synthesis, but the general idea of thinking in terms of shapes rather than notes does allow for some interesting tooling (though imho it's more on the side of creating virtual instruments and gear rather than music composition)

I present to you, CHIP32, A free audio unit that I found on the internet. 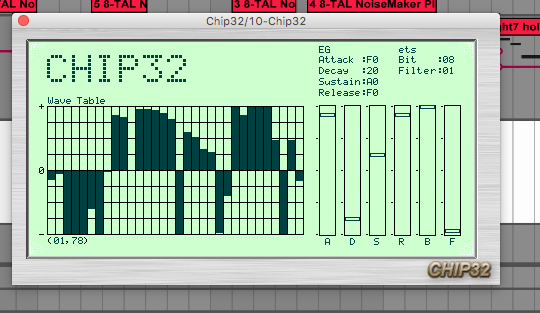 Just drag your mouse around to change the waveform and use a midi keyboard of some sort to play notes!

What happens if you put all the boxes in the wave table at the same level?

What happens if you have more frequent ups and downs?

If you really want, I could make a video for you.

Here is a link to download https://www.kvraudio.com/product/chip32_by_sam (not sure how trustworthy the link is, click at your own risk)

The graphical representation of the wave sample in Digital Audio editing software is showing the sample bits relative positions of each sample.

If you were just looking at a single sine wave, you could draw an approximation that would sound similar.

Musical instruments have more than one wave produced for each note however. There are harmonic frequencies and partials that contribute to the timbre of the instrument, creating a distinct sound that makes a violin sound like a violin.

The combination of the various frequencies and their related volumes shows up as a single wave pattern in the software, but it is really a sum of the total waves. Small edits will change the relationships and alter the sound.

Synthesizers use the combined waves to create representative sounds of an actual instrument, so yes, you can create the music by drawing out the waves you want. Starting with the fundamental frequency of the note you want, you would then layer on additional frequencies to add timbre.

If your wave editor has a tone generator, you can play with this by generating different tones and then combining them to see what they sound like.

I know this question is answered, but I just though I'd add an example from a modular, multi-type synth I created in Reactor a few years back and a bit more info about drawing sound. 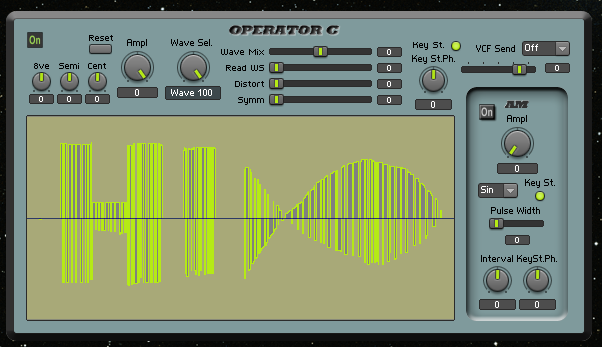 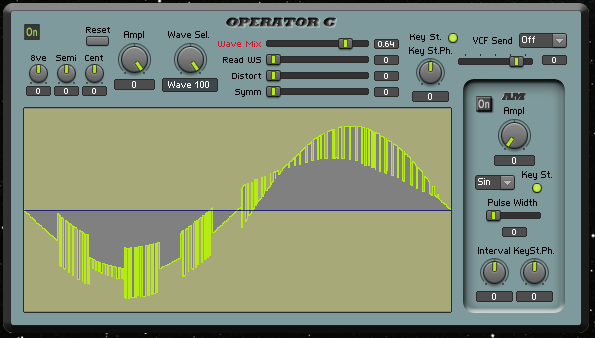 When sound waves are drawn like this in synthesizers, only a single cycle is drawn. There is no variance as the cycle loops (although in mine, I did create an interesting read direction oscillator and distortion). The pitch is changed and mapped to the keyboard by simply changing the wavelength.

Many people who are used to viewing simple waveforms can imagine how it's going to sound. For example, if it's square-like, the odd harmonics will give a hollow sound. Less complex, smooth waves will have a smoother sound.

Obviously, A/D converters simply map discrete points of a real-world signal, essentially copying it. How accurately depends on the resolution. So a signal could be copied by hand in the same way. You couldn't practically copy a whole song by hand though, and personally, I find it much easier and more creatively pleasing to create a synth sound through addition, subtraction and modulation. I only used the operator shown above twice while creating a sound. The rest of the time I used the other, more traditional operators.

Not the answer you're looking for? Browse other questions tagged software sound samples or ask your own question.

2
Types of Computer Generated Music Software
0
Audio Software & Synthesizer
1
Audio to Video Sync Software
0
Split a wav file into regions based on other regions/files
4
Free, newbie-friendly tracker software?
3
The absolutely simplest music production software for a complete beginner
1
Fruityloops not playing certain notes
1
What software can I use in order to extract this pattern from music?
1
Voice recording editing software
3
Denoising studio induced noise and noise due to poor recording