Thanks to the loudness war, most modern music productions suffer from bad audio quality, distortion and clipping.

However, recently I noticed that some audio productions suffer from something I would call "diagonal clipping". This kind of clipping doesn't make sense to me, it doesn't help to make the recording louder.

See this picture I took from a pop song released in 2002: 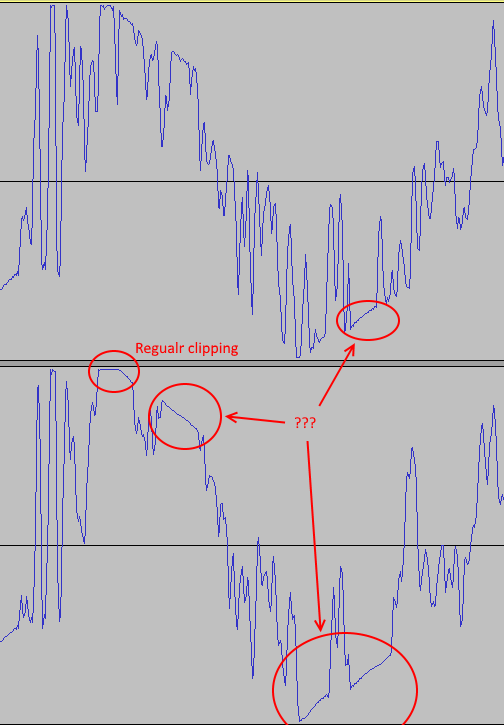 Can anyone explain what went wrong here, or what purpose this "diagonal clipping" serves? First, I thought this was an issue with my ripping process, but then I downloaded the exact same song from YouTube (vevo), and the exact same patterns showed up.

This is just a limited (or clipped through distortion) sound wave added through the normal mixing process, to a lower frequency soundwave.

I've created a simple example to demonstrate what I mean. 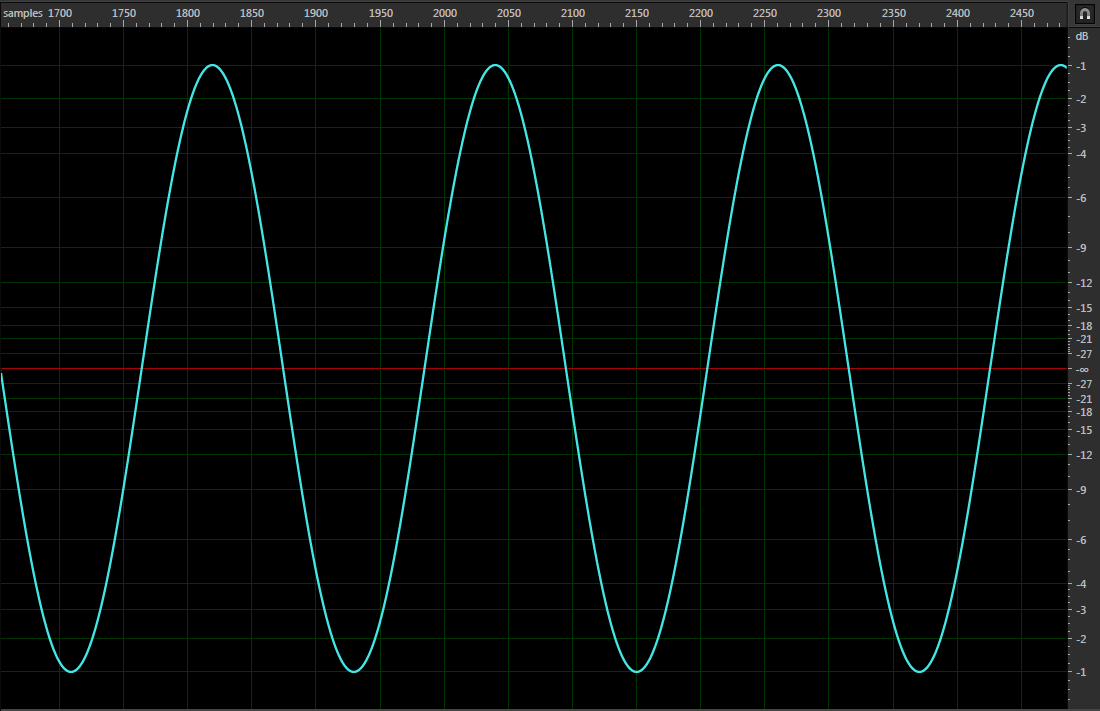 The brass instrument is then clipped for whatever reason: 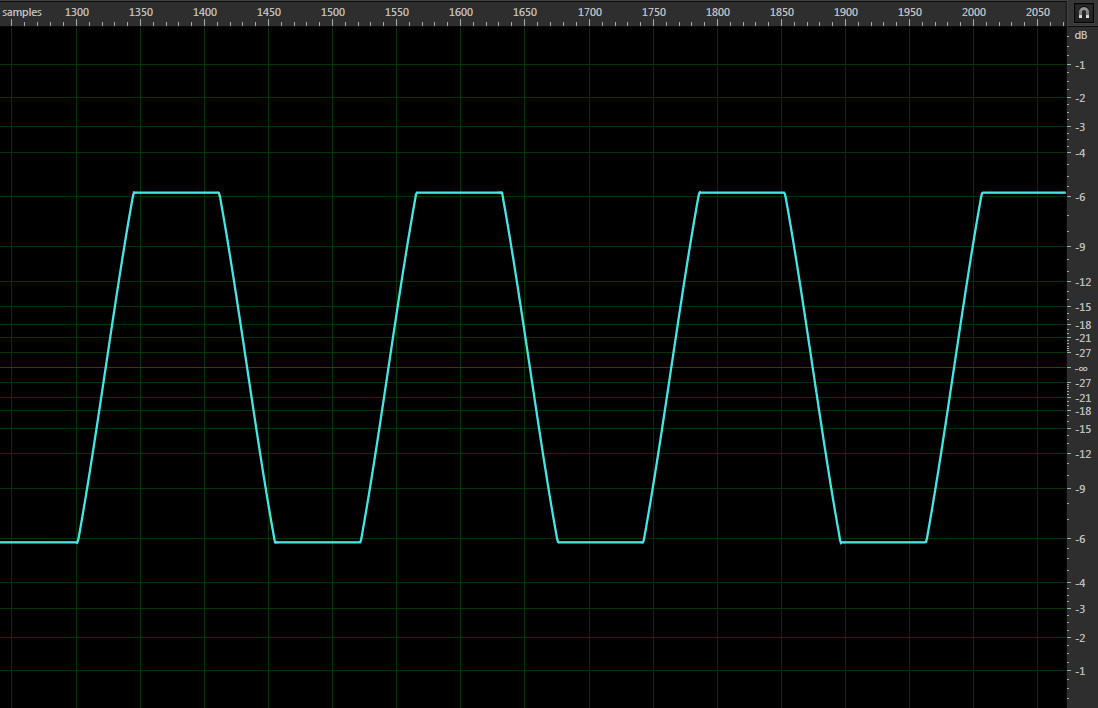 The clipped brass instrument is then added to the rest of the mix, which contains a triangular-like bass waveform.(I used a triangle-wave in this example because the example in the OP seems triangular-like): 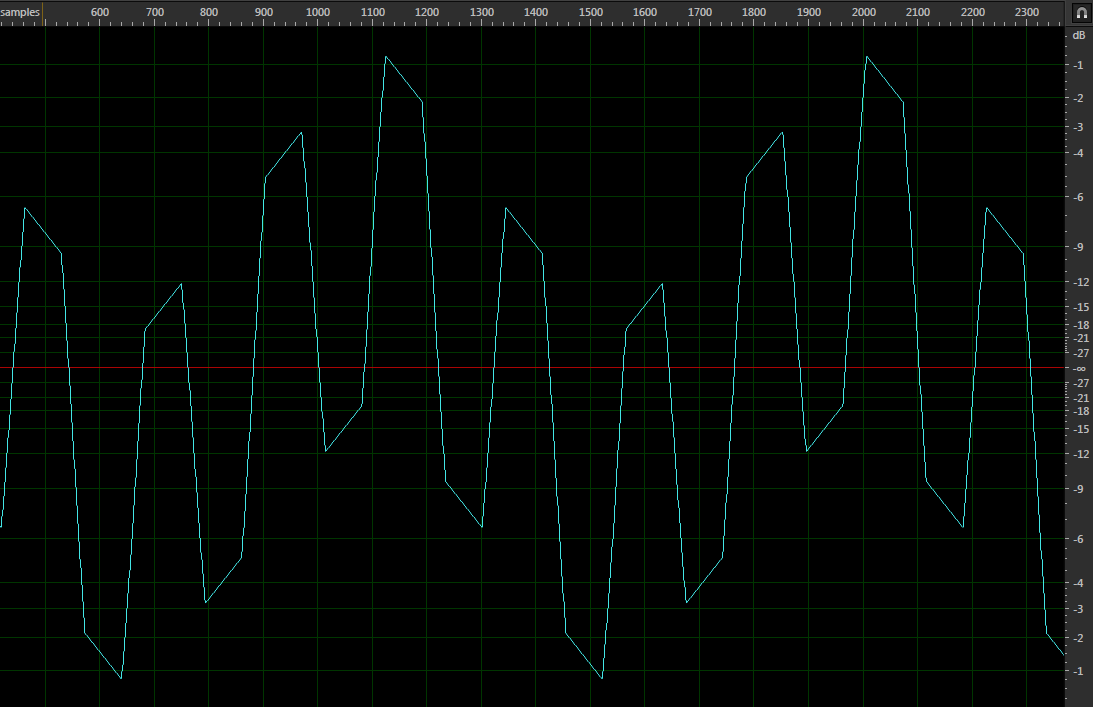 You will note that this emulates the effect of a DC blocking capacitor, in a record player on clipped vinyl... i.e. no 0Hz being passed. This waveform's clipping slopes exclusively the same way, towards zero. Unless this were a mixture of a triangle, and a square (clipped) wave, of the same frequency, with a phase difference of 90 degrees, Marc W's example isn't what is being shown here.

The reason for this waveform: the producer has utilised a clipped sound, then the mastering engineer has opted to utilise a high pass filter... So the clipped section cannot maintain 0Hz at the noise ceiling, it decays back towards zero.

Though lowering the RMS by approx 2-3dB (you can in fact re-clip after a HPF, without the source suffering much more) this technique does appear to make the material mildly less fatiguing for the listener. As although your brain will still detect the harmonics of hard clipping, your ear drums are perhaps not having their mechanical limits emulated by the sound.

With regards to the images that we've been presented with: firstly, we only have two cycles to make our assumptions from... I believe I'm probably looking at two examples of a clipped snare, immediately after the transient, with a HPF applied, post-clipping.

I encourage anyone to try this out.

Things that dissuade me from this precise assessment: nothing.

Regards to your answer, Marc: if we look at your resultant waveform, you show a squared-off waveform, (with a higher frequency than the triangle) superimposed upon the triangle. It bares very little resemblance to the image we're shown.

The very specific problem with your answer is that we are shown that the clipping occurs only at the crest and trough of both cycles that we see... We do not see what you illustrate (clipped peaks internally, in both directions).

[Another problem: the highs are being notably stuttered by the clipping. This would only really be acceptable around a transient, not in amongst a sustained bass sound... certainly for a 'pop song' anyway, rather than some aggressive dance music. Why would a 'sound professional' decide to clip a transient, with a large LF component displacement, then mix a triangle of the same frequency with it? I am baffled, this is surely how you illustrate incompetent mixing practices?!]

So... I tried my 'best' to give your explanation some credence: the two sources would have to be of the SAME frequency, and the clipped waveform would HAVE TO BE advanced by 90 degrees.

Problematically, we don't see a sharp enough drop in the centre of both images, in order for my modification of your assessment to work... but the wavefront appears to behave in the correct manner, as it approaches the first crest, in both images.

So, I could continue to mull over your suggestion Marc, and say: this could be a heavily clipped, extremely noisy sawtooth, added 90 degrees out of phase to a triangle.

There we go... Considerably more convoluted than my answer and very likely to be incorrect. Wouldn't you agree, Marc?

So. Finally, here is my full answer: The producer likely used a snare or kick sample, that was already clipped (or, because the two example images are slightly different, perhaps he/she utilised a hard clipper on their drum buss).

The mastering engineer applied a HPF, and limited/re-clipped... Hence, the tiny amount of 'regular clipping' illustrated.

Resurrecting an old thread but ill tell you from a perspective of a mastering engineer, the people responsible for the final quality control of frequency balance and loudness of music.

This is nothing but a pretty common technique to maintain snap on drums and other parts which are clipped to get the RMS level up of the signal.

After you clip a signal in the digital domain, you can pass it through tube based gear and overdrive it very little which would produce even order harmonics and convert the digital clips into what you all are calling ‘diagonal clipping’ , as you can see the diagonal begins from the left side and extends to the bottom, this would act as a transient for this signal and would help preserve attack. As you’re thinking that after clipping a signal why in the right mind would you pass it through another gear as it’ll result in peak overshoot and dissolve the effect of clipping. After passing a clipped signal through our gear we record it back to the PC and then soft clip this diagonal waveform to limit the peak overshoot.

You can easily replicate this effect in PC atop, just take a music file with drums and hard clip it until you see quite a few flat tops, then high pass it with a very narrow slope below 20hz, so that the low end is not messed up and voila you have this “diagonal clipping”

Whatever said by anyone here of mixing triangular sine and what not, do you think anyone would do all this triangle sine thing in the mastering process ? Where the goal is to be as transparent yet as impactful as possible ?

Not the answer you're looking for? Browse other questions tagged music mastering clipping or ask your own question.