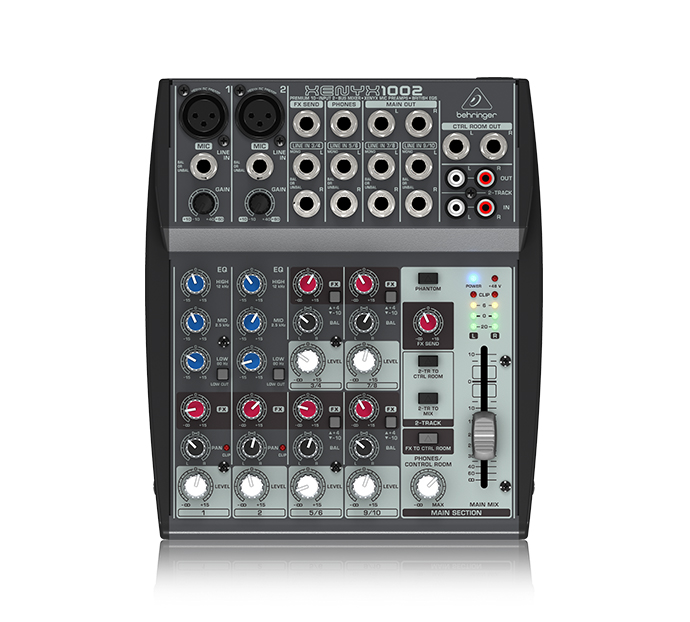 I would like to connect a MacBook pro via USB to the mixer, an Ovation Celebrity guitar, as well as an Alesis DM6 drumkit, and later an electric piano and perhaps a microphone or two.

I don't have a super expensive speaker setup and being a small room it doesn't need much. I want to repurpose 4x 30Watt 3Ω speakers and a subwoofer from a Samsung 5.1 surround sound DVD player system I have laying around.

Can I feed the output from the mixer into AUX into my Samsung DVD player to get the sound playing through it?

Alternatively, can I solder some audio jacks onto the speakers and plug them directly into the mixer?

Last question, can the mixer both play and record audio through the USB interface at the same time on a Mac.

From the description, I'd say that the mixer qx1002 model which I also own

You can connect the macbook via usb and send the signal to mains by pressing th button labled USB/2tr to Main Mix, alternativly the signal can be send to phones only

Sending phones output from the mixer to the aux input in the dvd is preffered as it's stereo to stereo jack, and will probably require only an 1/4 jack adapter and cable

Sadly, the audio interface on the mixer permits only one operation at a time - play or record

Not the answer you're looking for? Browse other questions tagged mixer dvd macbook-pro recorder-mixer or ask your own question.

1
Setting up Mixer Help
1
Audio interface or Mixer with built-in audio interface?
2
Help with setting up audio recording for retirement home meeting
2
Routing sounds to and from my computer
0
Using a mixer with a PC and PS4
0
Losing sound quality from CD (phono) to mixer (jack)
0
Using Bluetooth Speakers for Live Music
0
Best way to set up my DIY studio/recording/interfaces?
1
Issues with mix-minus setup on Xenyx Q1002USB with dbx 286s
0
How can I reduce hi-fi amplifier latency?