For my experiment I've recorded a sound during the day with my webcam microphone, and accelerated it 900 times, to hear whats going on there in the street at very low frequencies. Effects was interesting, but not so much, because only high frequency sounds have been recorded. (almost silence at low frequency)

Seems my webcam is not capable of recording very low frequency sounds, because of small membrana. Taken some estimations, I need to record sound frequencies within 0-25 Hz range, and with very good sensitivity in range 0.1 - 2.5Hz

How can I achieve this? Can I take subwoofer, and use it as microphone? (but it has low impendance ~ 7-8 ohm) Any advice for building such audio->electric transducer device?

This is not a direct answer to your question. What you need is not a direct answer because in order to carry out your intentions successfully you will need to know exactly what you are doing. Infrasound is a different world. Recording infrasound is much like exploring the mariana trench or deep space. You will not get far if you don't know where you're going and buying an expensive microphone alone will get you exactly nowhere. I bring a lot of background information so prepare for a long read.

First of all: Artifacts

I assume you are not only speeding up the sound, but simultaneously transposing it. So by speeding it up 4x you are transposing everything by 2 octaves. Speeding up by 1024x transposes your sound by 10 octaves. This means that 20 hz waves will turn into 20480hz waves and 1hz waves will turn into 1024 waves. Transposing or frequency shifting sound past the sample rate can and will cause artifacts that will be audible in the lower frequency ranges.

Therefore I recommend you to apply very strong HighCut filters and to go step by step:

Save every file with the maximum Bit-depth and sample rate possible. Therefore you should be looking forwards to accelerating sound 1024x not 900x. Why? let me explain: 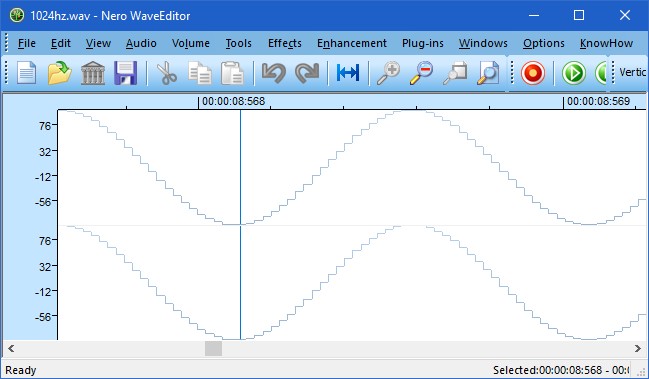 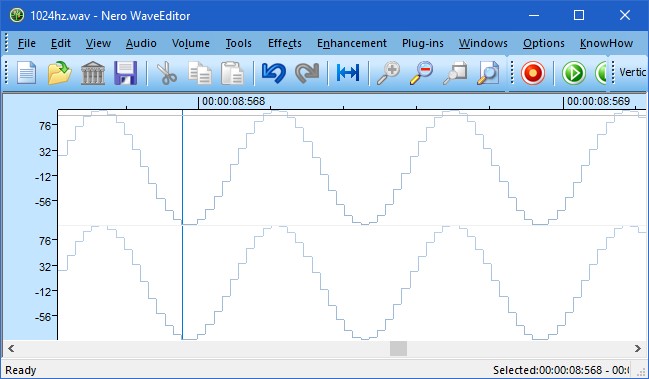 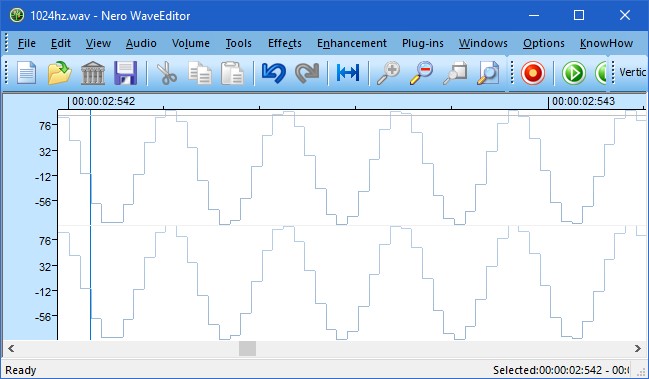 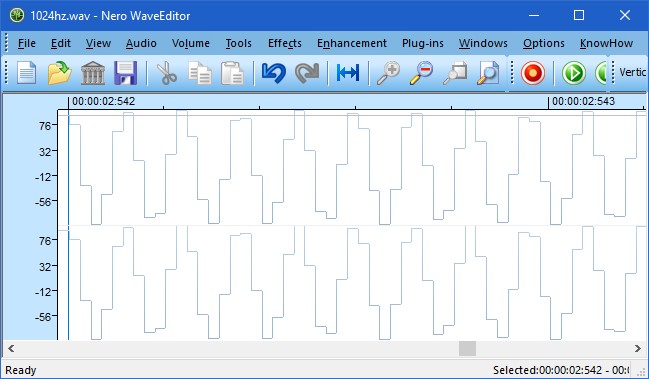 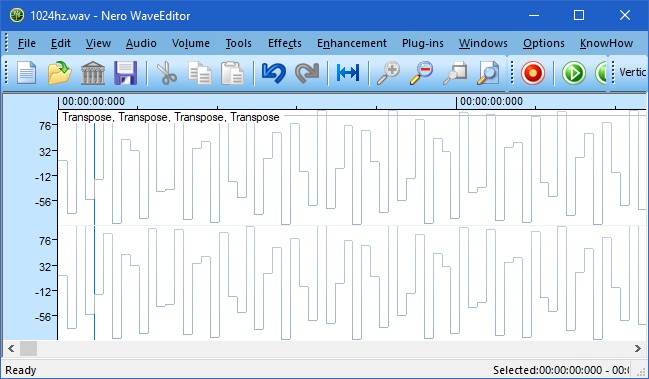 Now this does not even come close to a sinewave anymore. You see the highest note you can playback with a sample rate of 44.1khz is a 22050hz triangle wave. 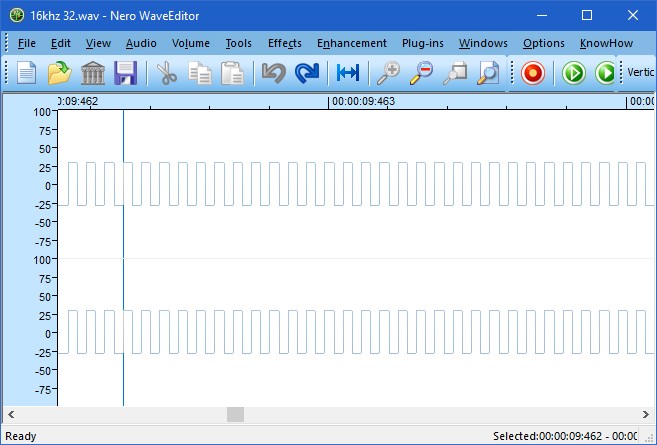 Yes, it looks like a Square wave in nero Wave Editor but really it's a triangle wave. Actually it's not possible at all to re-create a pure square wave because they require an infinite samplerate (You would need 2 datapoints, one at the top and one at the bottom, at the same timeframe. That is not possible) 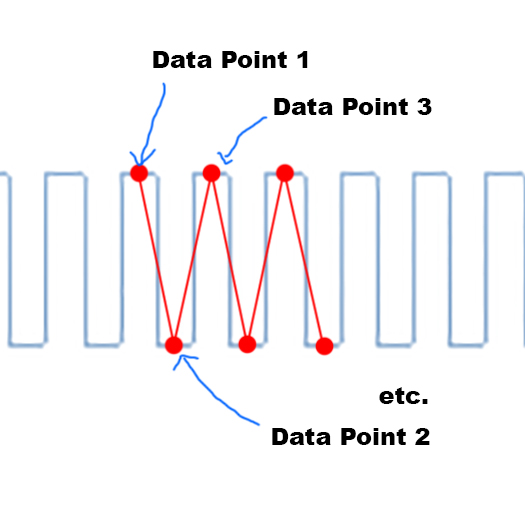 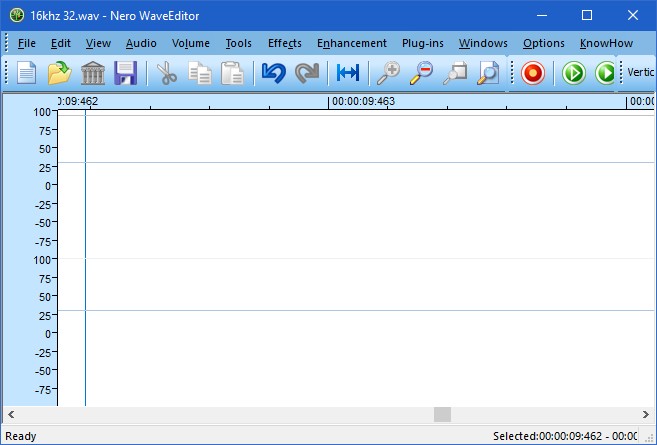 Now instead of transposing it by an octave I transposed 22050hz by 11 Semitones. And what do we get? Instead of a 41644hz sine wave we suddenly have a 2450hz triangle wave! Oops! 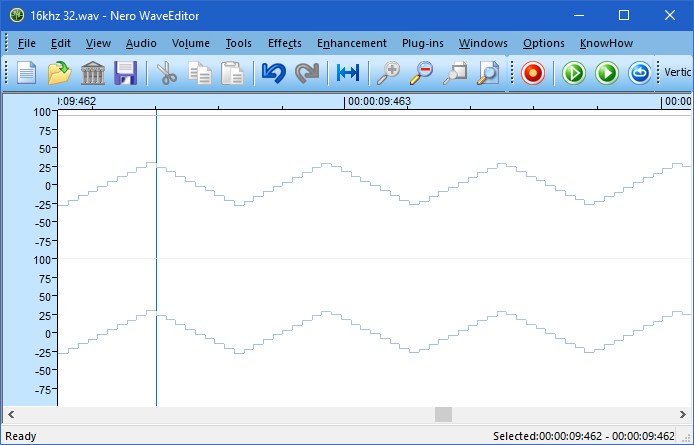 This is why it's so important to high-cut the high sounds before transposing and only transposing by a factor of 2.

Some people here in the answers expressed their doubts about their computers being able to handle infrasound frequencies. Lol. I beg to differ. This is 0.015625hz and we could go much, much, much, much lower than that. 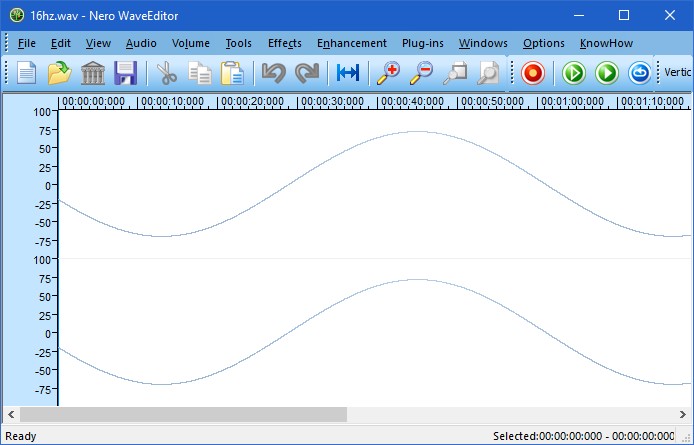 Now that you know how to transpose properly you want to record Infrasounds and make them audible and analyze them on a Spectrum Analyzer, right?

The correlation between frequency and membrane diameter

Because loudspeakers are my field of knowledge more so than microphones I will provide examples with loudspeakers but the principles are the same. A Subwoofer with a membrane diameter of 46cm and a moving mass of 200g will not be able to reproduce a 20khz note with a lot of volume. It has nothing to do with the weight of the membrane and everything to do with stiffness. If you send a 20khz note throuh a large Subwoofer the membrane will not oscillate uniformly. It will look a lot worse than this:

Now if you take a very small loudspeaker with a membrane diameter of 8cm and pass a 1hz sine wave through it the pressure will not be transmitted to the air around the speaker that is responsible for carrying sound to your ear. This is called a mismatch in acoustic Impedance. The air does not absorb and transmit the pressure wave but instead it moves out of the way of the speaker. Let's not get into the math of this but it's very much like trying to paddle a boat with a small stick. The water will simply flow around the stick.

In order to properly transmit a 1hz sine wave you would need an immense membrane, hundreds of metres in diameter. Horn speakers are a cheap fix. Technology does not allow us to create membranes of sufficient size therefore we connect horns to small membranes. Large membranes would prove horn systems useless. A small membrane 30cm in diameter is too small to properly transmit bass frequencies into the air. A long-throw horn system will couple the membrane to the air more efficiently and match the acoustic impedance. 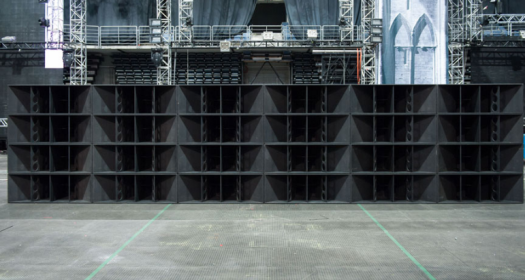 Or you start stacking these, also called an URPS: 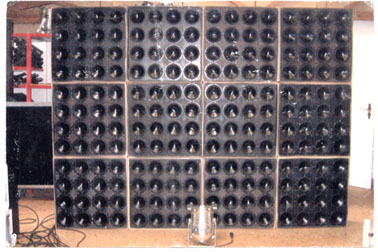 The same applies to microphones. A microphone will pick up sounds that have a matching acoustic impedance with more volume than other sounds.

We know sound is molecules vibrating. But we have different factors for determining volume in air. Air pressure and velocity.

The reason the girls eardrums are not ruptured at 160db+ is because the ear canal is too narrow, the frequency too low and the air pressure too low to efficiently transmit the energy of the air vibrating at such a high velocity to her eardrum: her surroundings have a very low acoustic Impedance which results in a mismatch.

Now imagine the picture above was a giant nuclear device pulsating at 0.01hz. And you were unfortunately close next to it sitting in this house with a small microphone:

You can see the winds pushing back and forth on the house. Air moving from areas of high pressure to areas of low pressure. Acoustic Impedance is too low to catch the pressure wave with your microphone. The microphone would need to be immensely huge.

Sound is not only air moving back and forth, it also manifests as a pressure. If you look at the yellow animated picture again you can imagine the darker orange bits are areas of high pressure and the light yellow bits are areas of low pressure. Like in the weather forecast. You could measure these differences with a pressure gauge, convert them to a soundfile and transpose it with the method described above which is what you want right?

Before you run off and buy some expensive microphone keep in mind that sound comes in different levels of acoustic impedance.

And you will need different methods to capture each type.

Now before you run off and buy some expensive microphone remember that you need a measurement tool that has a matching impedance with the sound that you want to measure. Acoustic Impedance is everything. Membranes are simply much too small compared to the wavelength which causes these massive differences in impedance between different methods of recording infrasound. You will need to choose your method wisely.

If you just start measuring with the B&K Type 4193 microphone recommended above you will have no idea what you are measuring. You will get a lot of unidentifiable random noise.

If you are aware of what you are recording and you understand acoustic impedance you will automatically know what tool you will need for the job without asking people online. And thanks to me you will know how to properly process the soundfile. Don't waste money. Know what you are doing.

A webcam mic is going to be nowhere near good enough to record infrasound.
Most mics, good or bad, aim to capture sound between 20Hz & 20KHz [the approximate absolute limits of human hearing]. The cynic in me would say that roughly, the higher the price, the closer to achieving that they may get.

Then there are specialist mics - made by some very serious boffins in brown lab coats - which can record 20Hz down to near DC.

B&K [Brüel & Kjær, who split out their commercial microphone division some years ago into DPA (Danish Pro Audio)] make some truly fabulous mics for all purposes, including the 4193 - ½-inch infrasound microphone, 0.07 Hz to 20 kHz, 200V polarization They seem to retail at about $150 which is pretty cheap for a B&K mic, I have some that were about two grand each... & they won't do infrasound, either ;)

btw, I'm not trying to sell you B&K/DPA mics, I'm just pointing out that this is a pretty specialist area that has serious players in it.

Then there will be the issue of whether your audio interface is useful below 20Hz - which is about where most of them really start to fade away.

As you plan on speeding up the audio into human range, then which speakers you use will be less important.

I did find this all-in-one 'low cost' solution, though at 345 bucks you'd have to be pretty serious about it to invest. I have no idea if it's any good or not, it's just what Google threw up - Infiltec - The Inexpensive Infrasound Monitor Project.

I do love their list of possible uses for this technology - ranging from the very serious to the very silly...

If you want to save some money and do it yourself you might try suspending a membrane of some sort, like a piece of paper or plastic, and attaching an accelerometer to it. A quick search found the MMA8453Q made by Freescale Semiconductor. It costs a dollar, takes 10bit samples, and samples at a rate of up to 800Hz. The max sensitivity mode is 2g which means one bit corresponds to about .002g. If you do a little more searching you might be able to find one more sensitive with an analog output that can connect directly to an analog input.

Your soundcard is probably capable of picking up signals down to DC. I know there are programs out there that let you use your soundcard as an voltmeter and oscilloscope. If it isn't then it is because someone decided to put a capacitor on the input to get rid of dc offset. In that case you can just short the capacitor. FM with a voltage controlled oscillator would be fine too. You may even find an accelerometer with a vco built in.

What you are looking for is a seismograph

Cheap and DIY way would be piezo disk with somekind of accelerator set up wired up to high impedance input amplifier. Get a cheap hand recorder powered via large power bank to eliminate power grid/pc connections noise.

Plenty of videos available on youtube. I have similar setup going for different purposes.

Not the answer you're looking for? Browse other questions tagged recording sound recorder sound-devices or ask your own question.

0
How to record a low frequency pulsating sound?
0
How to extract the data coming in sub 20hz Audio analog signal

7
how to record wind?
4
What is the best way to record acoustic piano and vocals from home?
2
Can I set a timer to auto record with an 744T?
1
Can not record 2-channel in Audacity from DJM mixer
0
Record Very Low Sound
2
Mad scientist: How to cancel out hum of known amplitude from signal of unknown amplitude?
0
How can I record audio from an MP3 player into my Mac?