Upside down waves in Sound Forge 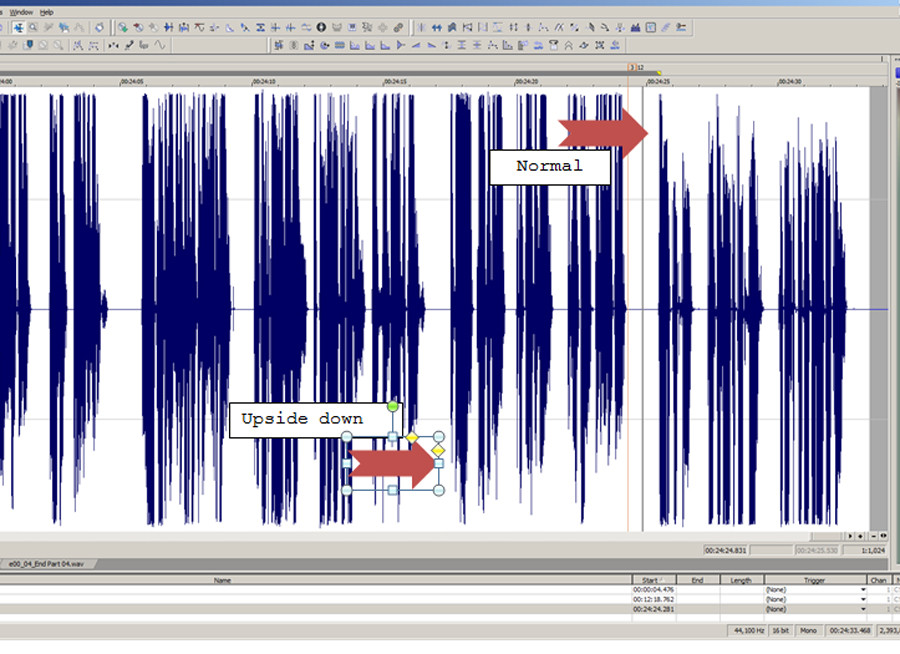 I've done a lot of audio editing in Sound Forge over the years. Occasionally, my wave map is upside down. It doesn't affect the play back, but as an editor I get a little freaked out, especially because I feel I've lost control of the file. Does anyone know why this is happening, and more importantly, how do I control it.

That's due to something called aliasing. You see you can hear from 20Hz-20kHz so you need to sample sound at twice that frequency. This is why CDs use 44.1kHz. Now I know what you're thinking. Your sound is sampled at 44.1kHz or 48kHz, and you're right but hang on.

Whenever you display your audio on your screen you're effectively resampling a sampled waveform. Your program is deciding to display each second of audio as a certain width on the screen. This corresponds to a certain number of pixels per second. So if you have a 1600x900 pixel monitor displaying 8 seconds of audio on a full screen you have 1600/8=200 pixels per seccond. So you're now viewing a signal that has been resampled to 200Hz which causes all kinds of nasty stuff. If you were to zoom in on the signal you would probably notice they're the same up close. If your program doesn't support that try an oscilloscope program.

200Hz gives you 100Hz bandwidth which is fine for most audio editing functions. You're supposed to be able to see relative volume at a glance. You're getting an idea of the envelope and amplittude over time. You'll be able to see any clipping that's occuring. What you're not going to be able to do is get a detailed view of your 44.1kHz wave form after it has been resampled to 200Hz.

All sounds are made of sinusoidal waves added to each other. So say you have a 1kHz sound wave at cos(2*pi*1000*t). If you start your samples at t=0 vs your sample at t=1/2000 (we're using seconds for t and radians for cosine) you get signals that are upside down(180 degrees out of phase/ or inverted polarity in electrical terminology). It's the same signal and sounds exactly the same because that t=1/2000 is just a .5ms time shift. If you swap the polarity on a speaker you can't tell the difference as long as you swap the polarity on all speakers at the same time after all. At each pixel you're sampling the waveform. The pixels don't line up the same way every time so you get an effective shifting in time. It just so happens that this particular signal is inverted when you resample and shift it using this particular resample and shift. This is because cos(x+pi) = -cos(x) (radians again). Cosine is called an odd function for this reason. What that equation says is that if you shift a cosine wave in time by a certain constant, it is equal to itself only negative. Notice something else interesting

This means that if you shift a signal by the amount required to invert it and then do it again, the signal ends up equal to itself. Also pi radians equals 180 degrees. That's why it is called a 180 degree time shift.

It would be a good thing to remove it, someone else would say it's not mandatory.

I think you'll be able to find a lot of plugins that do it OR run the signal through an outboard with a transformer and you'll be ok.

Not the answer you're looking for? Browse other questions tagged sound-editing or ask your own question.

3
Is there a quick / easy way to re-sync a sound edit for a short film, or is just one of those things we have to deal with?
3
What sound effects edit 'sound creation' has stumped you like no other?
2
Working in 96k 24bit, mixing down to 44k 16bit
1
Sound editing - car misfueled, what sort of sound?
4
Can I edit sound as fourier transformations?
1
How can I make my voice recording sound more integrated with the beat?
1
How to lower unwanted sound and raise desired sound in a recording?
0
How to slow down playback speed of an audio file in Power Media Player--in Windows 10
-1
Headphones: Can you use bass boosted headphones as professional sound editing headphones after making some changes in software or hardware changes?
1
Earphones: Can we use earphones and some other devices for professional sound editing?