Looking for a vocal effects pedal to improve vocals

Current setup: SM58 straight into a Ibanez Troubadour TA35 via balanced input.
My vocals are basically crap. Im working on improving that at the vocal end but would also like some help from a vocal effects processor. Ive taken a quick look at whats on offer but there seems to be a massively broad choice and its difficult to get traction on whats what.
Im not looking for fancy vocal effects - I want some thing that will basically improve the sound of my voice. What should I be looking for in a box (harmony, pitch correction, ???). TC-Helicon seem to offer a broad range of pedals any suggestions? Boss also have a few. Any broad or specific suggestions welcome.

Update: As Ive said in the comments to Antons answer Im really looking for something more sophisticated than just delay, reverb or chorus. E.g something that will actively FATTEN the voice e.g by adding higher/lower frequency components, virtual overdub, auto harmony etc. I.e something really tailored to voice expansion rather than standard post effects.

I own TC-Helicon's VoiceLive2, which pretty much has all of their smaller boxes wrapped up into a single unit. I'll admit it's a little pricey, and you probably won't use all the features (unless you're into some pretty extreme stuff), but I'll go through some of my favourite features and recommend something in a lower price-point. 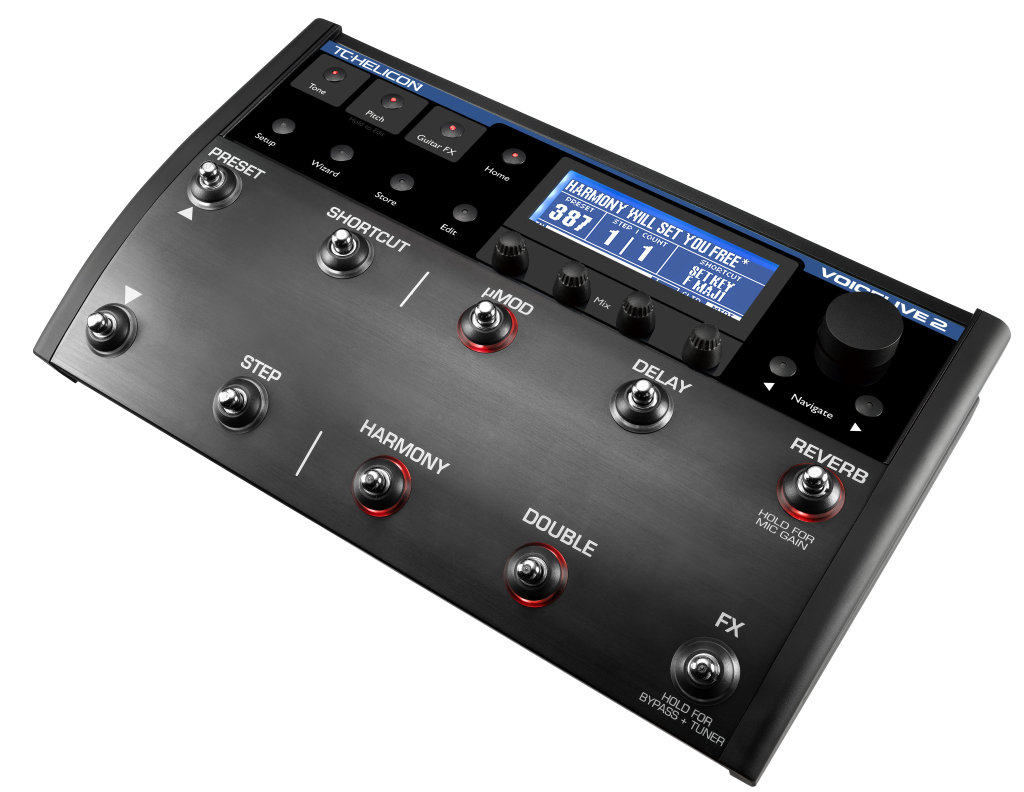 Just for context, you plug your mic into the pedal, and optionally an instrument as well (guitar or keyboard).

The "Tone" and "Pitch" buttons in the top left are probably my favourite features, mainly because they improve the vocals without a noticeable effect. Automatic compression, EQ, gating, de-essing, and very small (or large) pitch correction is added to the vocals when these are engaged.

Reverb, delay, double, and uMod is handy on this board as well if used tastefully in small amounts. It's capable of pretty extreme stuff, so you have to be careful not to overdo the effects.

The harmony feature is really cool. It generates voices in 3rds and 5ths above or below your own voice, following the chord changes that you play on guitar or keyboard. Although it's fun to play with, it doesn't follow perfectly all the time, and one wrong note makes for some really bad sounding voices so it can be risky to use this feature live. I would say it's more of a novelty to whip out an impress your friends rather than live use (however, it works beautifully with a keyboard running through MIDI).

This board does lots of other stuff (including looping), but I'll stop here and move on to recommendations.

Let's say my board broke tomorrow and I had to replace it with something else, I would get the TC-Helicon MicMechanic 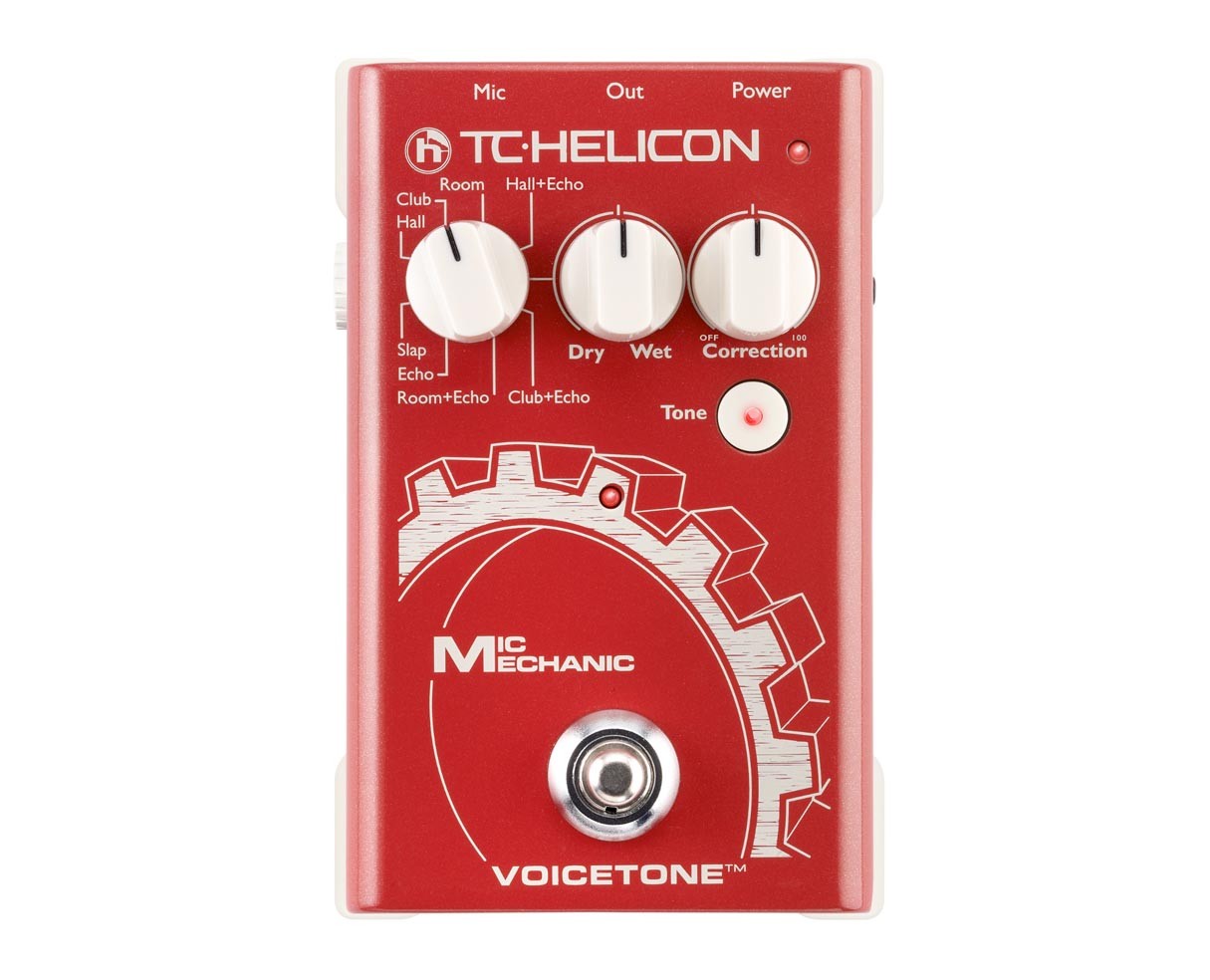 It has all of my favourite features and effects that are actually useful for most genres, and they are exactly the same as the ones used in their Voicelive series.

As Anton mentioned, great mic choice with the SM58, however the biggest improvement you could probably make to your vocals right now would be a PA system of some kind. Your voice might be sounding thin due to the way the amp is reproducing lower frequencies of your vocals.

This sounds like a live setup so I'd say the SM58 is an excellent choice of microphone for the purpose.

I'm more concerned about the amplifier. A bit of research tells me this is an acoustic guitar amp which can also take a vocal microphone and although I haven't heard this model that setup is hardly ideal. Might be OK for practicing but if you're playing in a club, try and make sure they have a proper PA.

Proper microphone technique is also key to good sound. Always keep the mike a few centimeters from your lips and make sure you sing straight into it.

As for vocal processing there are a few standard types of processors that you might want to try.

Also consider a mixer with some built in digital processors. If you decide to scale up and invest in a proper PA you can then use it in that.

In the end I went for the TC-Helicon Harmony G-XT. It is somewhere between the 2 TC-Helicon products mentioned in Johannes answer in both features and price. Having taken the time to look at all the TC-Helicon products in detail I like the look of the VoiceLive2/3 products but they were a bit out of my price range. The voice expanding features I was looking for that really drew me to the Harmony G-XT where:
1. Tone: Adapts studio-quality compression, de-ess and EQ to your individual voice to bring out your most exciting vocal tone")
2. NaturalPlay: listens to your guitar, keyboard or mixed music track and figures out which chords are being played. From the chord information Key/Scale can be determined, which allows Harmonies and HardTune effects to be perfectly fit to your music) - which the MicMechanic doesn't have.
3. Doubling: Doubling creates an effect that makes your voice sound “larger” in the mix.
4. Harmony: Creates up to 8 voices of harmony (varies by product), based on your vocal input and surrounds you with professional sounding backup singers.

I ended up with an as-new Harmony G-XT from Ebay for 130€ - which Im very happy with.
To choose what box suits you really requires a couple of hours in the TC-Helicon comparison page looking at differnt boxes in the 3 available slots. Heres a screen shot of the 3 metioned above: 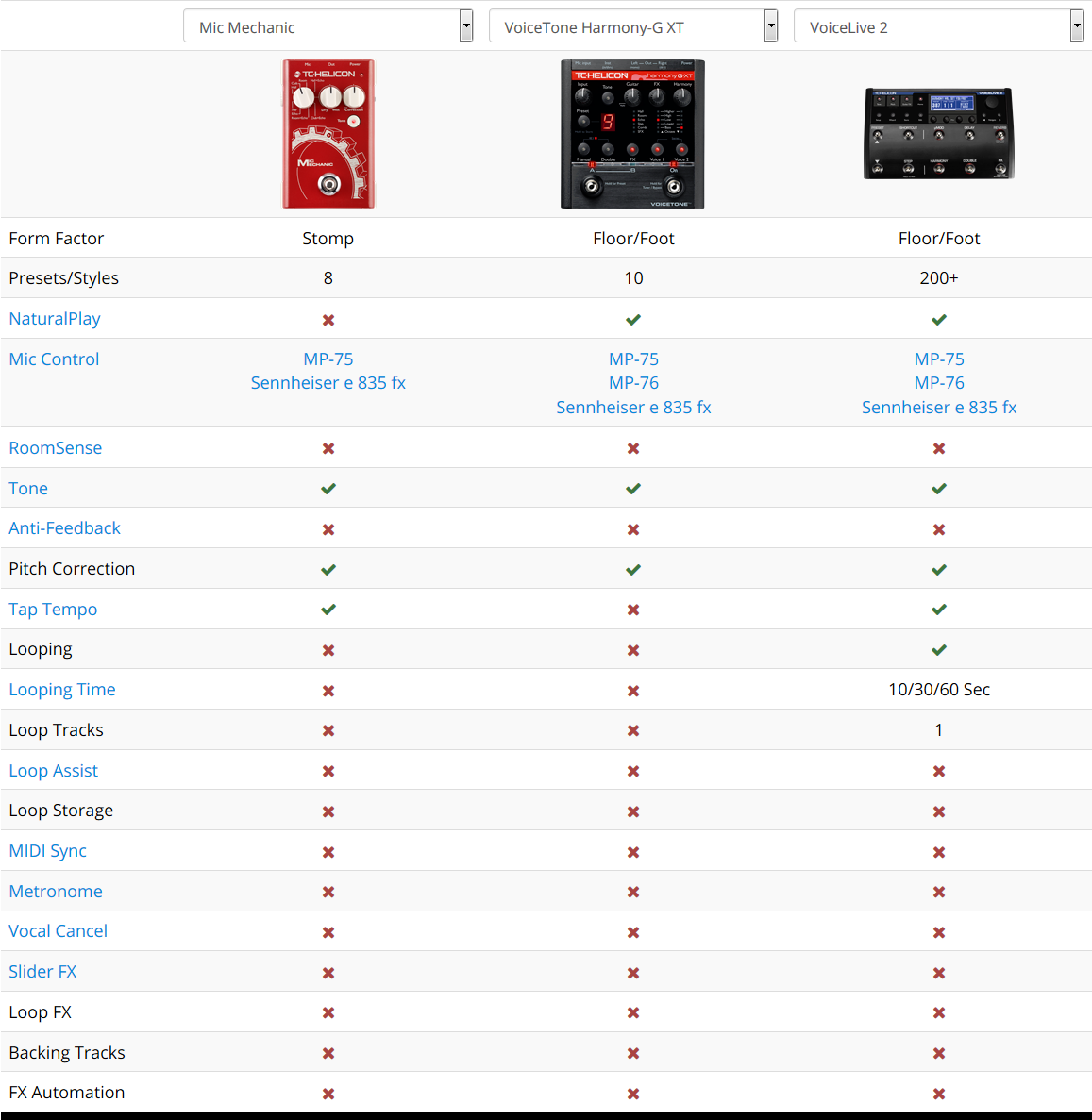 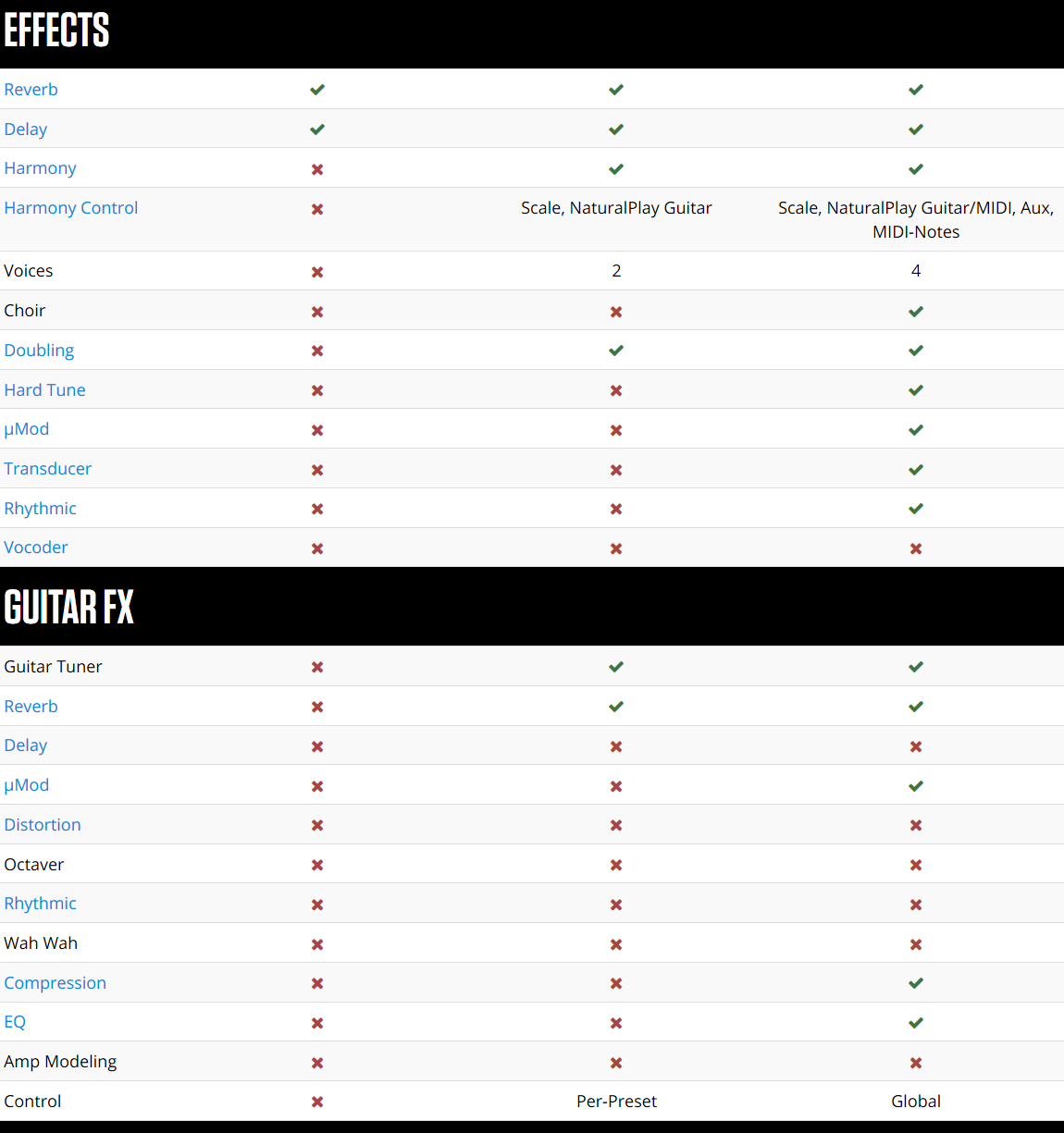 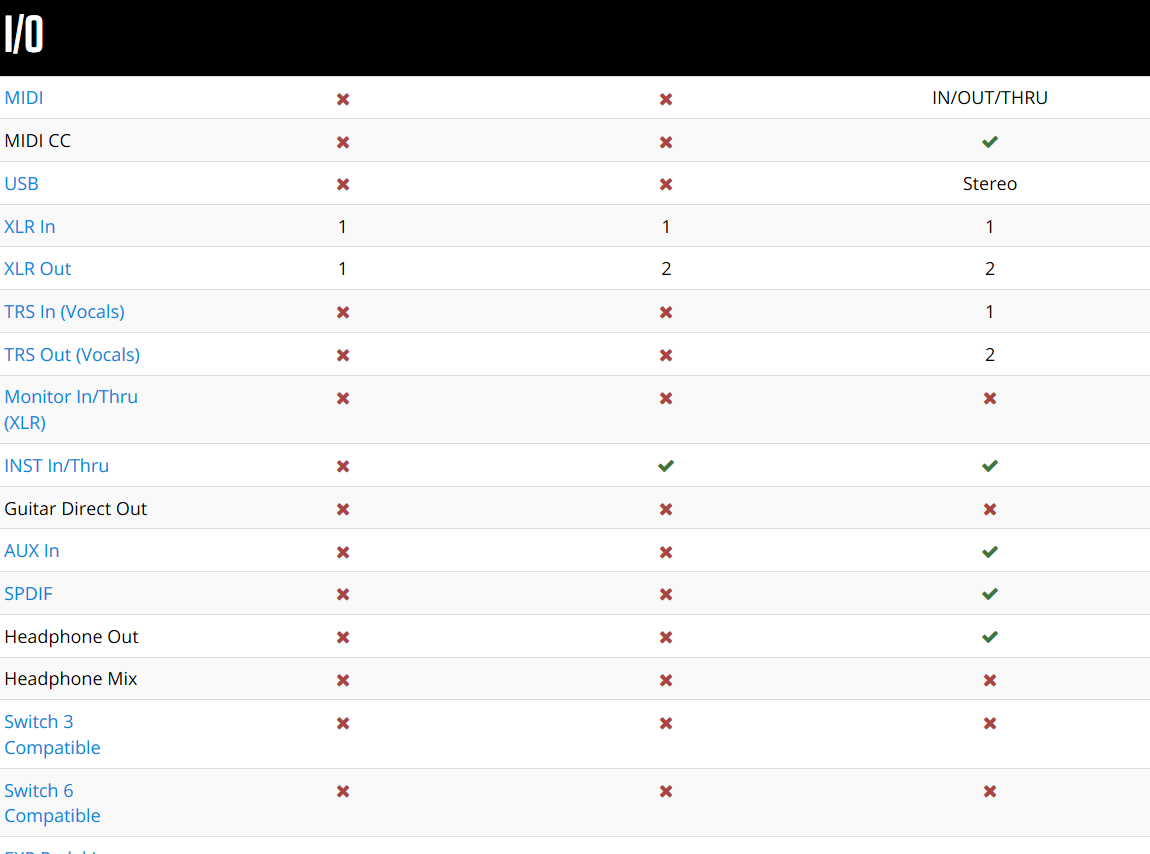 First, please try to avoid doublers, pitch correction, choir and harmonizer effects. These are the scourge of modern music production; they may feel reassuring and initially impressive, but the effect wears out quickly and ultimately you'll just sound like everybody else who can't sing.

(Disclaimer: if your aim is to make commercially successful records, my advice may not be the best. But but hopefully you also care about not ruining music...)

That said, if your voice is simply too weak to be made audible properly, in the context you want to sing in, then some electronic assistance is necessary and probably also not problematic.

First, you need a PA that's loud† and clear, without any nasty resonances. Acoustic-guitar amps can sound ok for this purpose, at least for monitoring purposes... but they're scarcely really sufficient as a PA replacement. A couple of semi-decent active speakers will definitely serve you better.

Loudness brings some new problems with it:

Apart from that, there's one thing that can significantly fatten up voice in a very useful way: smooth nonlinear saturation. This is best known from traditional analogue recording equipment, mostly tape machines and tube preamps. The latter are still a really nifty thing to use, even live.

Finally, reverb and delay. You'll always want at least a little bit reverb, but don't overdo it: if there's too much reverb, the voice will in fact start to sound more distant and feeble!
And delay is really nice as a space effect, to highlight some song parts. But if you're always followed by an echo, it'll seem a bit ridiculous.

Get a condenser mic would probably help with recorded quality way more than an effects pedal. That said, depends on exactly what sound you're going for.

KinetikKinetik
1
1
Add a comment  |
Highly active question. Earn 10 reputation (not counting the association bonus) in order to answer this question. The reputation requirement helps protect this question from spam and non-answer activity.

Not the answer you're looking for? Browse other questions tagged effects vocals or ask your own question.

11
Can instrument effects pedals be used for (live) vocals? Either at mic level or line level?
2
Looking to buy a sound effects pack (hand-to-hand combat impact sounds)
0
Techniques for vocal to sound like tannoy announcement?
1
"Ghostly" effect for vocals in a remix
2
What vocal effects do these heavy metal bands use for live shows
4
Need to know what I can use to sustain vocals or a vocal note live?
3
Can I use a guitar effects pedal for any electric instrument?
1
Software for vocal removal?
0
Name three most effective vocal effects used for this metal song