Just bought a Virus TI Desktop after hearing Ummet, Showtek, SvD, etc. rave about it and I have to say I'm absolutely blown away! I usually try to recreate sounds via Sylenth1 and often times can get pretty close, but with the Virus it's just a few clicks away and BANG! you get a huge, professional sound in one or two layers.

I've made a pretty similar sound in Sylenth1 using about three layers but for the life of me I cannot get anywhere close with the Virus. I'm thinking it's a band-passed saw mixed with a hypersaw (and some pitch mod) but can't seem to get the right BP filter settings. I also can't get the phaser quite right...

Edit here are some pics of a similar patch made in Sylenth1: 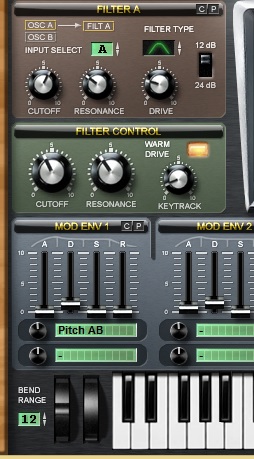 I think the biggest hindrance is just how different the filters are on Sylenth1 vs. Virus Ti, particularly the band-pass filter. Sylenth1's seems to be a bit wider whereas the Virus' is so narrow it's almost unusable IMHO. It may be best to just use a high-cut/low-cut filter with rectifier saturation and sine-fold distortion (via the FX 1 tab). Another option is a band-pass combined with a band-cut...

You provide no example of your result, so I just have to go with end goal.

Crucial things to this patch are:

I personally don't hear a powerful filter work case here. The sound is fat, yet the cut in lows is too steep, virtually unpresent. I suggest that you should achieve that bandpass-like character with multiband compression + highpass eq if needed. Multiband would be overpowering your higher-sounding range, thus creating a bit lacking impression in low mids, which is what we're after. Avoid 5k, 7k and most of things above, or things will get sizzly very quickly.

Have you tried applying these (I am going by your Sylenth patch there):

Not the answer you're looking for? Browse other questions tagged sound-design replication or ask your own question.