Here's the situation: I'm editing a lecture presentation. This lecturer has spiced up his presentation with background music and sound effects, which worked well during the live presentation, but needs to be removed for the digitally published version. There are many sections where he is speaking while the music is playing, so that the music cannot simply be cut out.

My short answer would be that it is virtually impossible but depends on how good results you expect.

The solution your intuition draws you to, and which would work in certain cases, is phase cancellation. Basically, if you have two sound sources, exactly the same, and reverse the polarity of one they will cancel each other out. The simplest example of this would be a DC source at, say 5 volts sent to a speaker cone. This would push the cone outward. If you add to this another DC at -5V the sum will of course be zero and the cone will go back to its original position. With a complex waveform the same thing will happen.

The key here is "exactly the same". Any difference in volume, frequency response and phase will make more or less or all sound come through.

This approach would be possible with at least useful result if the speaker's microphone was in a fixed position and the soundtrack was played back all the way through with the speaker in position but silent. Ideally all factors should be as close as possible to the actual lecture. You could then exactly match the two takes in time and possibly, if done correctly, at lower the volume of the soundtrack (but gain 6db more noise).

In your case this wouldn't be possible. The original sound will differ too much from the sound recorded by the microphone from the speakers, each step introducing differences in frequency response and phase.

I think in your case you will have to yet and use EQ to as far as possible isolate the speech. The results would be far from perfect, especially since the frequencies prominent in speech is usually also prominent in music, but might be better than nothing. Some linear phase EQ:s are able to show the spectrum and make changes over time. This means a lot of careful manual work but might be worth it in the end. Aggressive editing in this regard will create artifacts in the remaining sound so there's always a trade-off.

There are of course programs, usually rather expensive, that deals specifically with removing unwanted sound from recordings and these technologies are getting more and more advanced. It was ten years ago I last used such utilities but back then Izotope had some impressive solutions to deal with noise. You might have some luck there. This seems to be their on latest tool set : https://www.izotope.com/en/products/audio-repair/rx/

Good luck! Although this might not be the answer you were hoping for I hope you find a working approach.

Adobe Audition has a built in Noise Reduction effect that works really well. Effects>Noise Reduction/Restoration. You can use this to capture the noise profile of the background music or other sounds you want to remove. Just find the longest section where only the unwanted sound is playing in isolation, and grab this. The longer the selection, the more precisely the Reduction can work. Then, select a section of the audio you would like to test, and open the NR settings to adjust the amount.

For full control, you will need to use the "Advanced" drop down, where you can choose a larger FFT size for greater Noise print fidelity. I suggest playing around with the other settings to find the best balance, because extreme settings will drop unwanted artifacts. I can elaborate on the basics of most of these settings, but I generally have had to just play around until I get the ideal result.

The good news in the case of vocal material is that you can generally get away with a lot of NR before losing quality. 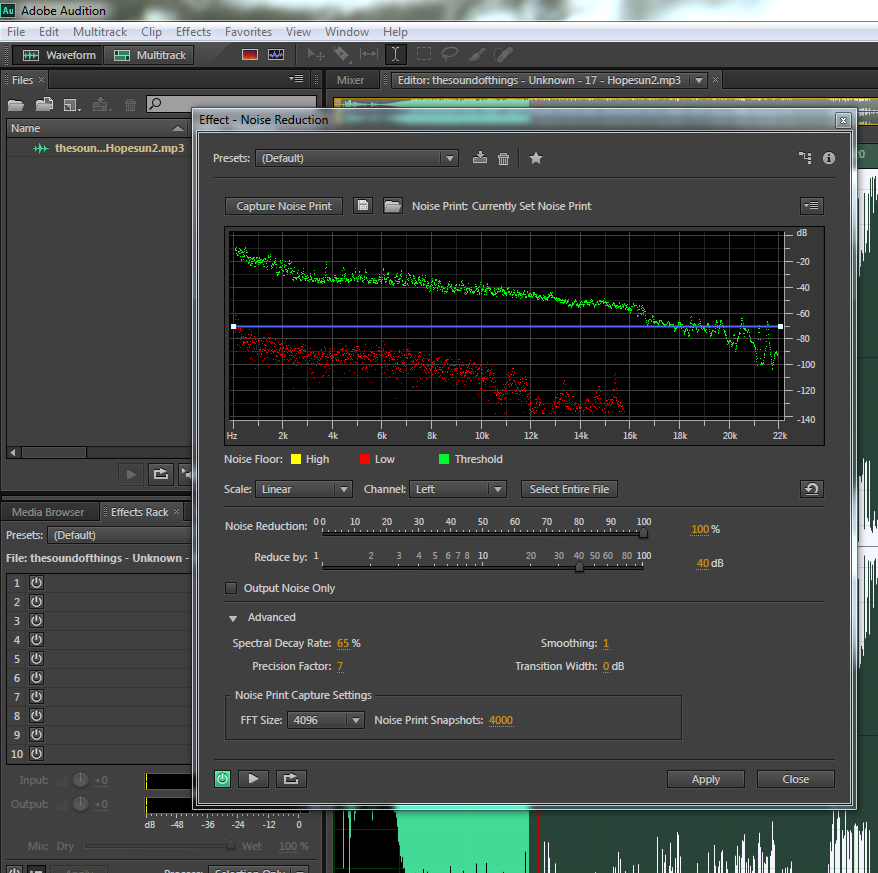 This is a classic application of adaptive echo cancellation (speaker phones need it to remove the speaker output from the microphone input which would otherwise appear as an echo at the remote speaker's phone), usually done with the LMS algorithm.

No but you might improve it a little. Next time get a better recording of the speaker. And if they want the audio tell them to stop with the extraneous noise fx

Not the answer you're looking for? Browse other questions tagged background isolation adobe-audition or ask your own question.

5
Designing the sound of cities in a positive way. Any Ideas?
0
Is it really impossible to isolate the vocal from music clearly? if yes... what is this?
2
Extracting Dialogue From a Scene
0
Remove vocals by combining multiple sources of the same background music? (cancel out differences)