i'm a sound designer and composer for mobile games, especially casual games for android/ios. i still have to learn a lot about mixing and mastering, but when it comes to mastering for an android game, i can't find any good sources for that.

a lot of sound designers or developers say something like: make it mono, normalize if it's not loud enough, compress, do some loudness measuring, etc..

by now, i normally use stereo for music and mono for sound effects (mono is louder on the device speakers i think) and master like i would master for videos or music. that's fine for ios i think.

when i play these same sounds on android, some are not loud enough and some sound distorted.

i tried to analyze system sounds from my nexus and a samsung galaxy into my wave editor and it seems that they didn't care about any real mastering techniques. for example, some click sounds peak at something like +5db to be loud enough. it seems like google and the manufacturers don't know how this bad sound card or the speakers work, so they can't give any guideline for sounds.

for the game i am currently working on, i've done some other things: stereo files with 55% stereo width; smoothly take out frequencies lower than 100Hz and higher than 10kHz; lower volume for low frequency sounds that fill the spectrum from 100Hz to 1kHz, peak at something like -20db (worked good for click sounds); higher volume for high frequency sounds >1kHz (for example synth mallets), peak at -6 to -1db; also higher volume for short musical jingles or other full spectrum sounds like hits or big chords

that works really well on all my tested devices, from galaxy ace to a htc m8. the nexus 9 sounds like a tin can but that seems to be normal :/

what do you think about that, do you feel the same pain with your sounds on android devices?

am i on the right way? 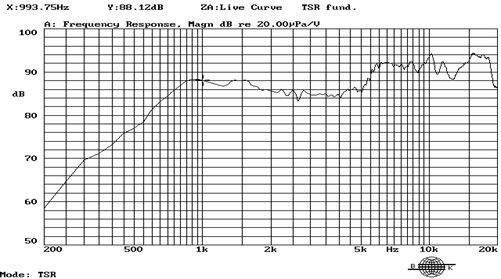 This means that you should definitely avoid too much action in the low region < 500 Hz as it likely will introduce distortion/decreased dynamic range.

I'm not actually a sound game designer nor have I made sound for Android devices but your questions have a much broader scope. As far as your method at the moment, it sounds like you are in good shape. Mono makes sense if your game is going to be played without headphones but if there are any positioned game elements, stereo could be more fun. Any general practices for maintaining high quality, without maxing out, and keep in mind that all Android speakers are very small.

First of all, mixing for Android devices is bound to be a headache. There are hundreds of devices that run Android, including media players, tablets, and phones. They will have lots of different speakers, AS WELL AS different speaker placement. Then you have how people hold the device while they play. Sometimes, the hands have to be positioned over speakers, depending on the model of course. The chances that a mix could sound decent on all devices is very slim.

As far as Google caring about the audio quality, it isn't their call. Android is just an open source operating system with little or no requirements for the final device, which is what makes it great and what makes it bad. If you were designing for iOS, it would be a totally different matter because Apple don't just make iOS, but they make the hardware too and their digital to analog conversion is very high quality.

My personal experience is unless the sound really kicks butt, most good and addictive smartphone/tablet games are so repetitive that the first thing I do is turn off the sound.

This can be more the design and / or speaker on the device type. If you think about it, most speakers on mobile devices today are not really designed for anything more than a ringing and / or alert sound. They are definately not designed for audio in the sense that most if not all android phone or tablet devices come with earbuds as standard for listening to audio. Due to the size and design and fit for purpose they are more suitable to higher pitched frequencies associated with their intended purpose as an alert, thus they lack any sort of mid to low frequency response. Also considering that most of these devices are the size of a match head requiring that they fit into a device thats ever decreasing in size itself, it is no coincidence that they sound crappy for anything but their intended purpose. Hope this helps.

The quality difference is not about Google but the size of the speakers and the vision of the manufacturer. Since every manufacturer uses different speakers, sound cards...etc. it is not possible to find an overall Android speaker specs document, or even get a perception. However, the certain size of speakers have common characteristics and it is possible to get used to that. Checking the levels both on a mobile and a tablet should be sufficient to cover two different speaker groups.

It is possible to stream PC audio to the speakers of Android over wi-fi using some apps which means you can use an Android speaker as a monitor while working on the PC. SoundWire app does this or you can search for other solutions. This helps obtaining a more accurate sound for your target device.

If you can't manage to do that, the other option is to record all SFX to a single mp3 file, playback from several devices, take notes, make adjustments and repeat the process until you are satisfied.

Not the answer you're looking for? Browse other questions tagged audio sound sfx mastering android or ask your own question.