Im trying to make this cool guitar sort of lead (I use Massive btw). I got a pretty cool sound doing the following:

Three saw wave oscillators The first two detuned by three cents and a third an octave lower in which I also turn down the amp on somewhat. All going to two filters. 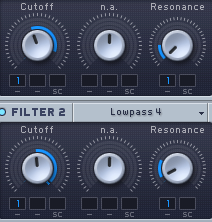 Filters 1 and 2 have 1 envolope controlling modulation of about almost all the way with both resonances being raised as well. This envelope looks like the follwing

Amp envelope is the following:

Ive added some tube distortiona with a dimension expander to give it some more width and power. A bit of bitcrusher as well. Im getting a cool sound but I wanted something more of the sound seen here starting at 1:47

However I cant seem to get that cool wah effect. Its a great lead, would help me out alot in my education of sound design.

Browse other questions tagged sound-design synthesis or ask your own question.

0
How to make the “Trumpet” lead in this track?
2
Help me make a patch for this bass stab/pluck?
1
How to make this guitar lead sound from Megaman X (Super Nintendo)?
3
Reverb sort of airy synth note
2
Powerful sort of techno pad
1
How to make this lead!
0
Making noises you get from playing guitar
0
Sound Design Behind This Future Bass Lead
1
making a tree crack and creak and falling with sound synthesis