How would you recreate this ascending sound effect?

I heard this song by Usher called "I Care 4 U" and there is an effect right near the end of the song. It seems like this was done to all instruments and not just a single instrument. The effect occurs just after the "tape stop" effect at 3:51 where there is some choppy pitched-up motion. I'm sure there are a bunch of ways to do this, but I can't think of one that would sound as good as what the producer of this track did. Link below:

For effects like this where the entire track is re-pitched and chopped, you would export the final mix and then run that into something where you can alter the speed destructively (and thus the pitch) and then chop it or draw a set of hard volume curves over it and you'll have it. The 'tape-stop' effect is part of the effect that follows or vice-versa. The producer of the track has also altered the top of the volume curves nicely while fading out overall.

Ultimately, it could be the by-product of scrub over the two-track master, as has been suggested, where the chop is the end result of the hardware or software used, or simply the attempted re-creation of the same. The first time I ever heard anyone use a total track chop effect, it was on Coil's album Horse Rotorvator on the song Penetralia right around 5:16. That was in 1986 and it blew me away.

Sounds like either a scrub tool, or reverse, or both.

Could also be just chopped up samples that are re-arranged.
I don't think this is a standard effect though.

I would export the whole song up to that point (or at least just before the "stop"), and bend the pitch down a few octaves, then alter the dB manually until I get what I want. For the scratching right after, I'd play around with gradually bending the pitch up with a rapid succession of spikes (by gradually, I mean gradually increase the intensity of the spikes).

You could do this by slicing up the audio into little chunks and then using time manipulation to screw with the pitch. In Logic you can use FlexTime in "tempophone" mode to do this, and Adobe Audition has a destructive "time and pitch" tool that can do this with even more control.

Another approach I've used for something similar in Logic is to use Tape Delay and adjusting the delay time on-the-fly; you can hear an example in a few places in the percussion of this track of mine; turning feedback and dry to 0% and wet to 100% would allow you to get just the wobbled noise.

Here's a very basic attempt at showing the basic principle: 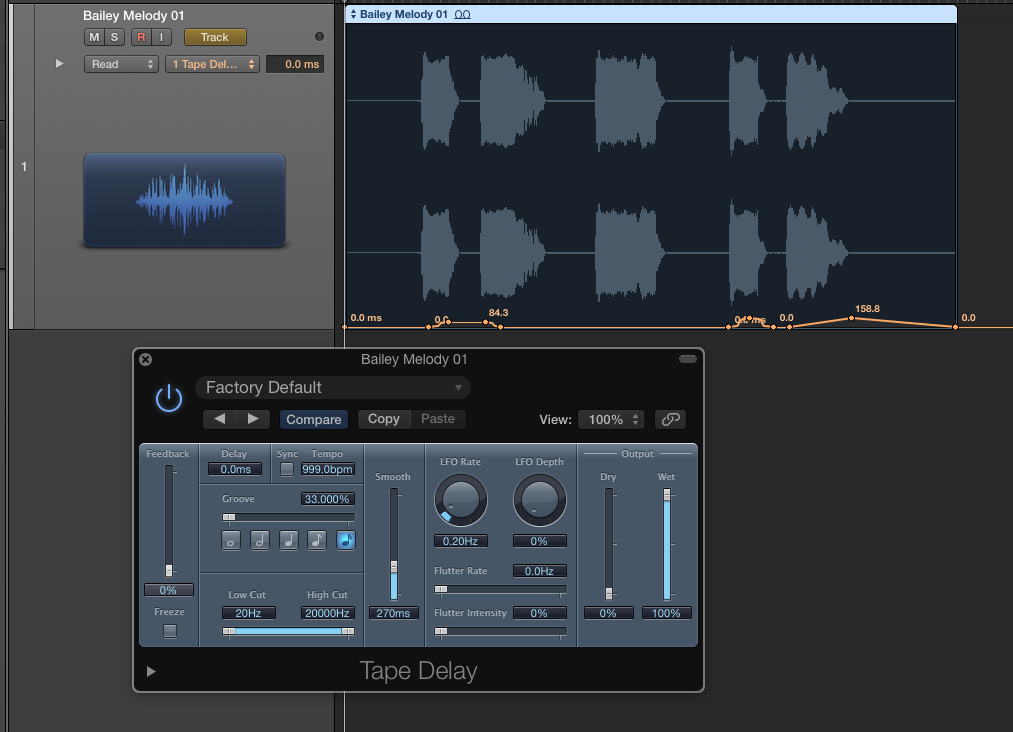 Not the answer you're looking for? Browse other questions tagged replication effect or ask your own question.