How can I get my direct input monitoring louder?

I have a Focusrite Saffire 6 USB. It looks like this: 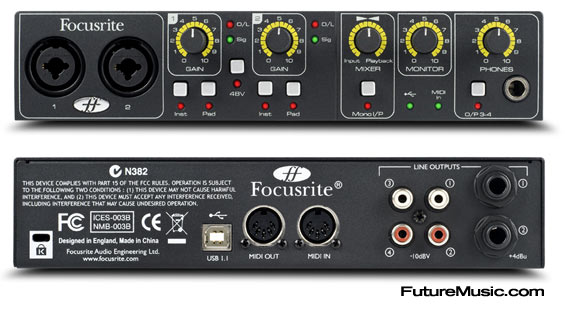 Is this a common problem? How can I fix it? Note that I'm not using "pro" headphones if that makes a difference.

This is an old interface which has some other quirks, and I might be willing to buy a new one if there is a better option out there...

I doubt this is really an error – as this interface is USB-powered, the designers probably spec'd the headphone output with rather low maximum voltage, so as to avoid supply problems; I know at least the old Tascam US-x2y series suffered from that problem. For consumer headphones, which are targeted at low-voltage battery-supplied devices and hence have very low impedance, this should still give you a sufficiently loud signal, but with studio headphones it's often a bit dissapointing.

Input-monitoring is in particular a problem if the input comes straight from a mic without any compression, saturation, EQ whatsoever: this way, it'll sound quieter than anything on a recording, but still have a lot of peak level.

One thing you should ensure is that the high peaks don't just come from artifacts you'd have to filter away later anyway: low frequency plops, and high-frequency hisses. In doubt, use suitable spiders, pop-killers and improve the mic placement to maximise "useful level", that will give you both better monitoring level and probably better sound on the recording.

In particular for vocals, it can also be a good idea to put a tube preamp before the interface. That warm, smooth overdrive is pretty much standard for studio vocals, and makes the signal considerably "hotter" without increasing the required peak headroom. You might also put in a gentle compressor for yet louder RMS without any distortion, I used to do that a lot – but now I rather prefer to do all that later in software, where you have much finer-grained control.

The most straightforward solution to your problem at hand however would tackle the other end: put an externally-powered headphone amplifier on the line out, and don't use the built-in one at all! Dedicated headphone amps should always give plenty enough volume, so you can just make the outputso loud you have good monitoring and then adjust the DAW playback level to get the mix right.

Thanks for your answers. This is what I ended up doing:

I found out you can buy a splitter for a mic (called an "isolation transformer", $40) which allows you to use two preamps (in other words it allows you to send the mic signal to two places, one hard wired and one that's "isolated", basically "spying on" magnetic noise from the other line). I split the mic signal, and then I ran the isolated signal to a tiny $100 mixer with digital FX and connected the direct line to my USB interface (direct line is responsible for any phantom power).

The little mixer becomes the singer's monitor mixer. We send it not only their vocals but also the USB output on another channel. The potentially crappy preamps on the little mixer don't affect the nice preamps on my audio interface, and if I am recording a singer they can control their own mix on their own personal mixer without having to touch my other gear. If I make any changes to the gain, etc. on my interface, it does not affect their mix, and vice versa. And I figure that the mixer and splitter will outlast many USB interfaces to come.

Update: Almost 6 years later and this is still the system I use. Cannot say enough good things about it.

Update #2: It looks like there exists at least one product (the Rolls PM50s) that exists for this exact purpose (albeit with no monitoring FX).

As mentioned USB power has its limits and your high impedance headphones are not helping the situation. If you are willing to dump this interface and get a better one I say do it. I have had issues with buss powered interfaces in the past, mainly that they have dropped out when trying to use all the features at once over bus power. I would take a look at the MOTU ultralight, same size-ish but way more I/O. I would also get an external pre amp. Generally these on board pre amps are not that great, although companies will boast about their performance they are generally a minimum viable product for both size and cost reasons. You will notice a big difference with an external pre. Also as mentioned a headphone amp will help out the issue of driving high impedance headphones. Like everything there are lots of options out there in this world. However a good interface should have a relatively decent output.

Not the answer you're looking for? Browse other questions tagged monitoring volume or ask your own question.

1
Comteks or equivalent system
3
Opposite of a Y-cable
1
Low impedance monitoring headphones that work with Mbox Mini
1
Mixed performance from monitor headphones plugged into audio interface
1
How can I hear the sound during recording with a simple DSLR?
4
Considerations for moving monitor mixes to the stage
0
Can FX send be used as an extra AUX send on mixer?
4
Certain tracks have wacky volume on certain speakers?