Why does the internet sound like a sine wave [closed]

Ask Question
Asked 6 years ago
Active 6 years ago
Viewed 111 times
1
Closed. This question needs details or clarity. It is not currently accepting answers.

I scraped a couple of webpages, then in java converted every letter into a number zero to nine dependent on how far along the alphabet it is. I then turned these into pairs of digits.

I imported this raw into audacity, as unsigned eight bit stereo signal at a 4410 sample rate. I repeated this as I didn't have time to go through and scrape more sites right now.

The result sounds like a sine wave, with some noise.

Maybe that is because linguistics and/or semantics are cleverly designed. At least that is an interesting way to look at those. I'd be curious to see what the results are with different language (I guess you analyzed english, no?)

Guessing severely because you gave too little information in your question, I think you are hearing the letter E.

As shown in http://en.wikipedia.org/wiki/Letter_frequency, E is the most common letter in common English by a wide margin: 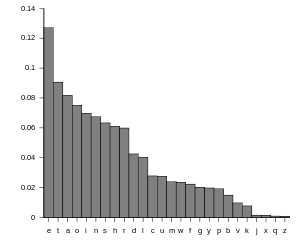 If you look at this chart as if it were amplitudes of tone generators at various frequencies, it is clear that "E" dominates the spectrum. If this were MPEG (or other psycho-acoustic compression) encoded in the chain, it would likely toss away harmonics below some threshold; for example, D–Z might not be carried through compression. Higher amplitude harmonics might be generating the noise.

Apart from the fundamental, there is a spike at 1Hz which is probably an abrupt transition to zero, I'd guess that that may be the point of repetition of your data.

I'd have to guess much less if you'd made the SoundCloud track downloadable, and as others have noted above, could eliminate the guessing if you gave the generating code.

Not the answer you're looking for? Browse other questions tagged acoustics or ask your own question.

3
How good is your knowledge of acoustics, and how does this affect your sound design?
32
How to deal with the difference in sound when the audience comes in
3
Why do I hear less bass in the middle of the room, and can I do anything about it?
4
Is there a music genre or type of sound to help drown out background noise for the purpose of concentration?
3
How does our brain detect the direction of sound?
0
New auditorium construction— where is the 100% perfect place for sound?
2
Does the shape of an acoustic/vocal booth matter for maximum isolation?
3
What is the best shape for passive sound amplification
2
How does a cardboard paper towel roll amplify the sound?
0
Why not pointing the loudspeaker toward the sky during open-field frequency response measurement?