How to add amount control to amplitude modulation?

Here is a simple amplitude modulation patch in pure data: 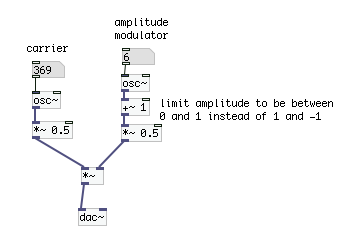 The idea is that when no amount is applied, no modulation can be heard, and as the amount is raised the modulation becomes more prominent, and when the amount is at the max the carrier's amplitude is being modulated all the way to zero amp.

But how do I do that? Here is a patch where there is a control for the amplitude of the modulator: 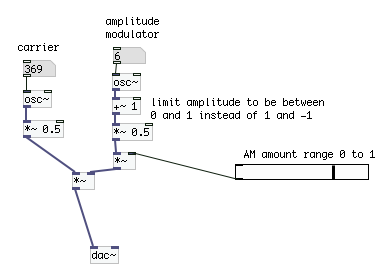 How can an amount control for amplitude modulation be implemented? At the lowest amount there is no modulation, and as the amount rises the modulation becomes more intense. Is there a way to do this?

You basically need to build a cross fader. On one side you have your AM signal, on the other you have a steady signal of 1. You then cross fade over to the AM signal and voila!

I've not got time right now, but will knock one together tomorrow if you're still stuck. If you do solve, it why not post back with the solution as an answer.

You can place the signal addition of the modulator ([+~ 1]) after the multiplication with the slider, right before you multiply that signal with the carrier. But instead of 1, multiply with 0.5. So the modulator could look like this:

With no modulation, the carrier's signal will be at 0.5, and with full modulation it will modulate between 0 and 1.

I really liked this approach, and works really well.

This is an example of the implementation:

Not the answer you're looking for? Browse other questions tagged modulation or ask your own question.

10
How do you create Single Sideband Modulation (SSB)?
0
How to pitch modulate with a delay plugin
0
Frequency modulation in frequency domain
12
What is the "level" of Frequency Modulation of many synthesizers?
2
modulation wheel affects last knob turned in ableton live
3
FM and PM synthesis - what is the difference and why?
0
Is it possible to make this kind of voice-modulation setup?
2
VCV Rack - what is the maximum frequency deviation for FM?
0
I want to get started with modulation recorded audio