Recordings the Americas by motorcycle

I posted this same question on gearslutz, but I'm sure I'll find plenty of useful insights here too.

So in a few months, I'm going to be traveling by motorcycle from New York to Ushaia, Argentina (southernmost city in the world). I'm then going to journey by ship to Antarctica. The trip will take me roughly a year give or take a few months (I won't be able to go to Antarctica during their winter months, so I need to time it accordingly).

This is first and foremost a cultural adventure. My main focus is on interacting with people and exploring parts of the world I've never been to. That being said, I would never forgive myself if I did a trip like this and didn't bring at least some recording gear. Thing is, I'm going to be severely limited in terms of space. I'm mostly interested in recording ambiences, so stereo is a must. My question for you all is, if you had the equivalent of, let's say, half of a small backpack, what would you bring (minus tripod, that can be strapped down on the bike)? Keep in mind I'll be recording in literally every climate and terrain there is, so durability is a must as far as humidity and temperatures go.

I have an SD 702 which could work as a recorder, though it's a bit bigger than I'd like. I also have a pair of CM3s set up semi-permanently in a Rode blimp in an ORTF setup, though I think that may be too big. Perhaps switch out the blimp for two baby ball gags?

One thing I'm thinking is, regardless of what light duty recording rig I use for the bulk of the trip, I can have my parents ship the rest of my gear to Ushaia so that at least for the time that I'm in Antarctica, I'll have a full rig (cause let's be honest, how often do you get to record in Antarctica?)

Look forward to the responses, thanks :)

What an exciting journey! My two cents worth: Regarding the safety of your data, be sure to upload to the cloud (Dropbox or the like) whenever you have internet. Bring WAY more memory cards than you think you will need, then double that. As long as you can get it to the cloud and know someone back home has copied it locally AND backed it up preferably offsite, then you could re-use cards. Also backup your files locally on extra memory cards, keep them hidden and waterproof, because you never know when and for what odd reason you could lose your gear. Not trying to be debbie downer, but it happens, fire, theft, water, etc. You might also want to do a lot of review and deleting of bad takes, keeping only the best ones.

This is not exactly an answer to your question, but for a while now I've been trying to think of what could be a useful lightweight rig for recording ambiances. I thought I might of found it a while ago in the Telinga SSM partnered with a small recorder providing plug-in power. I saw this shot of one mounted on a gorillapod: 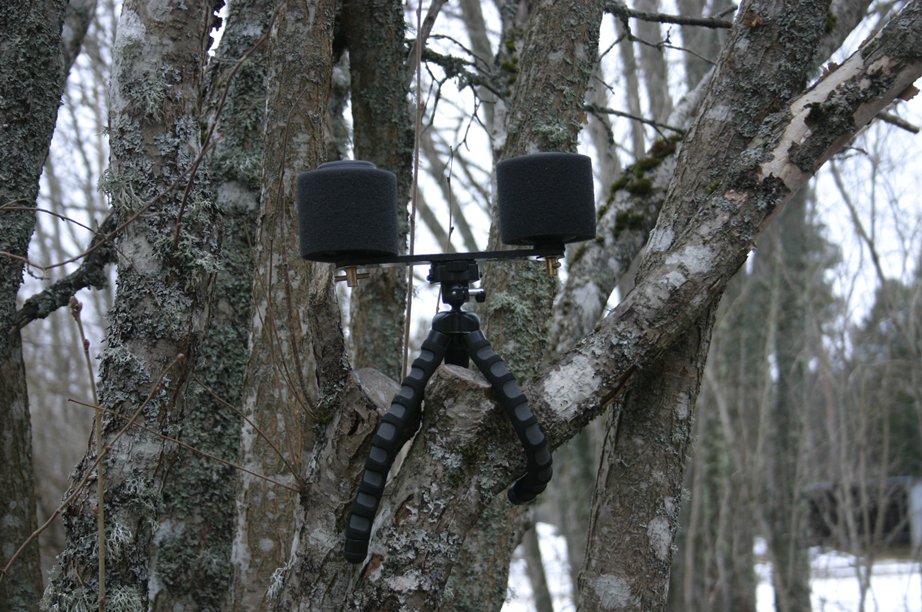 It would probably all package into a pretty small case, yet provide good stereo, low noise recordings. I've tried to get in touch with Telinga about buying one, but sadly they don't reply. If anyone knows anything about the SSM availability please comment. Of course it may be a good option for you too.. if they still exist.

If you're looking for something extremely compact, the new Sony PCM-D100 is fantastic. It's the best you'll find in such a small package. Other than that you'd be looking at a 702 and small blimp setup as you've mentioned. I've travelled through Nepal, India, Australia, and Cambodia with my 702 and an MS pair of Schoeps CCM mics in a rycote blimp and absolutely love the recordings I've captured. I couldn't recommend it enough if you can spare the room! I manage to pack it all into the bottom half of a kata 3n1 bag.

I haven't worked with the PCM 100 yet so it may outperform my recommendation, but I would go with the PCM M10 as your bit bucket.

Instant on, battery life for days, memory rolls over from internal to the SD card seamlessly, and its the size of a cell phone.

You'd need a small 2 channel preamp to go with - I use the SD mixpre with mine. Sounds great, super stable, super solid.

For a mic I'd run an MS setup (for space and ease of setup) and maybe just bring a fuzzie instead of a blimp that wraps around both mics. This would rule out your ability to record in situations where the wind is up over 10-15mph, but that may not be worth the packing space it would take to transport it.

If you go with the CM3s instead of the MS rig, Rycote has a super softie that just came out that may be right up your alley for this trip.

I'd also go ahead and build a 5 pin XLR cable with two little breakouts at each end. It will be way easier to store and to coil than two separate cables. They're simple to make and super worth it. Pinouts go like this

I have a couple of them and I use them all the time.

alternatively you can zip-tie or rubber band your two cables together to keep them acting as a single unit.

Not the answer you're looking for? Browse other questions tagged recording design sound location or ask your own question.

4
recording motorcycle
6
REQUEST: Windmill recordings
0
How many sounds do you try to capture on the set?
2
Ropey old recordings of radio broadcasts about the Vietnam war?
1
The Combination of Field Recordings and Music
4
Stereo Hydrophone Technique
5
The "first sound is the right sound" problem
1
What software do you use to catalogue your recordings and sound fx?
2
Mitigating Noise From Clothes When Making In-Ear Binaural Recordings Whilst Walking
1
My keyboard recordings sound tinny/low quality