What are good amplification methods for percussive fingerstyle (on an acoustic guitar)?

I have a guitar with an active pickup built-in. It works fine in normal playing, but when playing percussive fingerstyle (example below), there are two big issues:

I realise that in the example video Mr. Hall is using a microphone, but I would prefer a system that is built into the guitar. I also imagine that would be cheaper (though I know very little about amplification, so please correct me if I'm wrong).

If you want to do more percussive in your acoustic guitar, I remember that Fishman has developed their onboard-preamp, which I use. It's a preamp that combine undersaddle piezo with built-in mic beneath the preamp. Named "Classica Blend" or "Presys Blend". 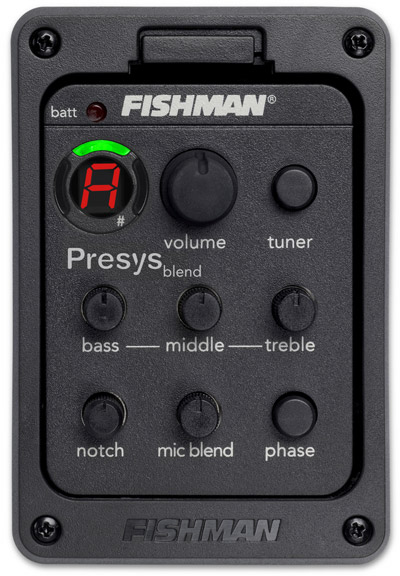 Or if you prefer microphone, you can use Eric Clapton style. While playing acoustic guitar with both mic and jack output from guitar.

But, if you're playing in a big stage, with a microphone, the feedback chance is higher than just with an onboard-preamp.

A microphone is definitely the best solution, sound-wise. And indeed almost certainly cheaper than anything built-in, if it is supposed to sound anywhere as decent. You don't necessarily need a large-diaphragm mic, though it should be a condenser. Small-diaphragm ones are available for as little as 50$ these days; you may want to spend a little more (e.g AKG perception 170), but even with a Behringer C2 you can achieve a pretty good sound (provided you guitar offers it acoustically; room acoustics are also very important). This being already true for simple strummed rythm guitar, and for percussive styles the advantages of a mic become more pronounced: all those body components will come out just as you want them predictable and all. Really, the only good reasons not to use an external microphone is mobility on stage, as well as feedback issues.

Now, as for the alternatives – obviously there are gooseneck or similar microphones to be attached to / built into the guitar, which offer basically the same advantages but with less optimal placement in exchange for better convenience. These can sound almost as good as external mics; the main problem here is feedback. So if you don't need to play very loud live, this might be the ideal thing for you. But you'll probably need to spend a lot more money, and also have to try for yourself which models fit your guitar well. Especially with unusual and "acrobatic" playing styles, you must still be sure not to hit and/or move the mic somehow, which is perhaps not so easy to ensure. So again point for preferring an external mic for the percussive stuff.

Then there are various types of contact microphones/transducers. These can sound very different: some will lack tone definition, amplify all touches to the instrument over the top, and have even stronger feedback tendencies than microphones. It requires a good parametric EQ ready to fight such issues. But some such systems give a really good compromise between direct-string pickups and microphones. In particular with regard to percussive playing, you'll have plenty of attack, though it may sound uneven and way too loud when tapping close to the transducer. But this can be integrated in your playing style, for instance you can get certain very deep, throbbing "bass drum" sounds that are basically impossible to achieve with any other amplification system. A model I've made good experience with is the B-Band BB1470.

Next, there are magnetic pickups. Obviously they only work for steel strings, which you seem to use. These pickups work in principle the same as electric guitar PUs, but sound quite different because they have a way lower inductance (the high inductance is what smoothens out the treble range in electric guitars, removing the "acoustic edge"). They can get quite a nice, very direct and bright yet "warm" string sound, but are pretty much useless for amplifying anything percussive. Yet, it might be useful to combine a magnetic PU with some microphone system, so you have loud, clearly defined tones in addition to percussion & ambience. In particular, magnetic pickups are very selective to the "body-side" vibrations of the strings, which eliminates your mid-neck hammer-on problem (though I daresay that's something you should try to tackle with playing technique: don't hit right between the frets, rather aim right on the fret you want and only then slip you finger behind it).

Finally, there's piëzo bridge pickups. The most widespread type nowdays, the simplest and in many ways most straightforward way to amplify an acoustic guitar. That's most likely what you have in your guitar already, so you know the character – very "crisp", but often unpleasant, lacking depth, "resoncance", as well as percussive components anywhere but right at the bridge. Such piëzos can quite well be combined with contact transducers, because of the contrasting sonic properties (rather dull but very body-oriented, resonant). Since you already have a piëzo, this is therefore a combination worth consideration.

For hammering on in the middle of the neck producing problem I have found several ways to make this better:

Mute (deaden) the strings above the fret where you are tapping to get rid of the backbuzzing permanently on any setup, even acoustic. Use your other hand, a finger from the same hand that's tapping, or a scrunchie/wristband that you pull over the fretboard from above, and push back above the nut when not tapping.

Tapping higher up/closer to the middle of the fretboard on most setups becomes inharmonic because the string you are tapping (bringing to the fretboard very quickly) has more frets to hit "on the way" to your fret, if that makes any sense. I find I can get away with doing it on the first few frets with no problems, but as I go up the fretboard it becomes more and more necessary to use some sort of above-the-fret muting technique. A more even and less rising action can make the next fret clearance above a fretted note much better and to my ear makes tapping everywhere on the fretboard more consistent and reduces the chance of EITHER side of the string hitting an undesireable fret before the one you intended. Also less relief! As little as you can get away with playing. Relief and next-fret clearance are inversely connected. And obviously as low an action as possible--but hopefully you're already playing with a very low action. Less relief, less rising and more even action, and a lower action are all the key here.

Also there are various properties associated with the neck, top, body, frets, nut, and bridge that determine how much sound is conducted where and from what parts of the guitar. A combination of lots of favourable factors can make a guitar voiced well for percussive stuff vs. another guitar, before you even amplify it electrically. Having a more sensitive top; a damped nut so that that speaking length doesn't excite the neck; a relatively dead neck so that the neck itself doesn't conduct sound from either side of the fretted note and all vibrations have to be heard by running down to the bridge or not at all. These can all help. A guitar that's voiced for louder low-end and midrange and a quiet top end will ring the fundamental tones clearer than any string interference or harmonics present (because those are much higher.)

After that, bridge pickups tend to be the best at giving you sound only from below (the "right side) the note you are playing, without picking up the backbuzzing. On most 2-pickup electric setups, switching to the bridge will greatly reduce backbuzzing and eliminate my need to mute above the strings for all but some taps (sometimes you have to tap the 12th from open and it still really wants to excite both sides of the fretted note.) I would think an acoustic bridge pickup or a magnetic pickup very close to the bridge would help a lot.

You do NOT need amplification to play percussive finger style. I mean, it is not necessary unless you need to amplify your guitar anyway. I play percussive on a Taylor 314ce completely unplugged and it sounds great. Don't listen to anyone who tells you that you absolutely must have electronics to be able to do this. You don't.

Not the answer you're looking for? Browse other questions tagged amplifier guitar or ask your own question.

2
I have this acoustic guitar pickup. What is a good software for it?
3
What is the best shape for passive sound amplification
1
Acoustic guitar with 2 pickups, but no internal mixer: what to do to make it mono?