I have several thousand wave files which I'd like to split into tracks. I plan to add markers with Audition CC, then split them into individual wave files and convert to FLAC, but Audition won't split files as a batch (running this operation on multiple files at a time, not simply splitting one file into its constituent regions.)

Windows solutions would be preferable to Mac/Unix, and I'm willing to purchase software if necessary. I've considered rolling my own with Python but I'd prefer a GUI and I'd rather not reinvent the wheel if this problem has been elegantly solved in the past.

Edit: Might go with TwistedWave, a $79 Mac app, though I'd have to run it through GigE on my MacBook Air, rather than directly on my i5 PC.

You could use ProTools software. Just use the strip silence tool to remove the silence between the sounds. Then ProTools will put all your snipers into your Region list. Then you simply need to collect all audio files in the Region list and press Export Regions as Files. Then you can decide in which Format and at wich Location to bounce.

Adobe Audition can do exactly what you want!

In the Edit view, go to Window -> Marker list (Alt-8) Select the marker regions you want. At the bottom there's an icon that looks like a save button (I added a red circle around it): 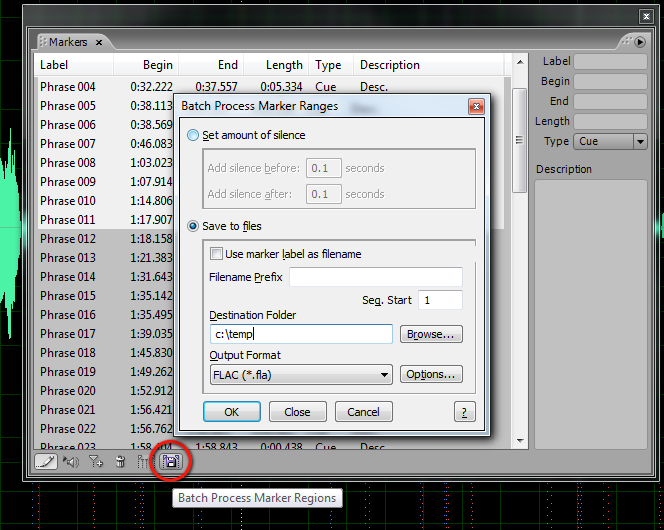 As you can see from the screen-shot, you can save them as individual FLAC files.

Not the answer you're looking for? Browse other questions tagged audio batch adobe or ask your own question.