Any small bus-powered USB mixers on the market?

I've been trying to find a USB-powered mixer. Something with 2 or 3 microphone inputs. I've seen the Mackie VLZ's and the Alesis MultiMix, but all of them require bulky power supplies.

Is there anything on the market like these but with the added functionality of being bus-powered?

It was bound to happen before long: - 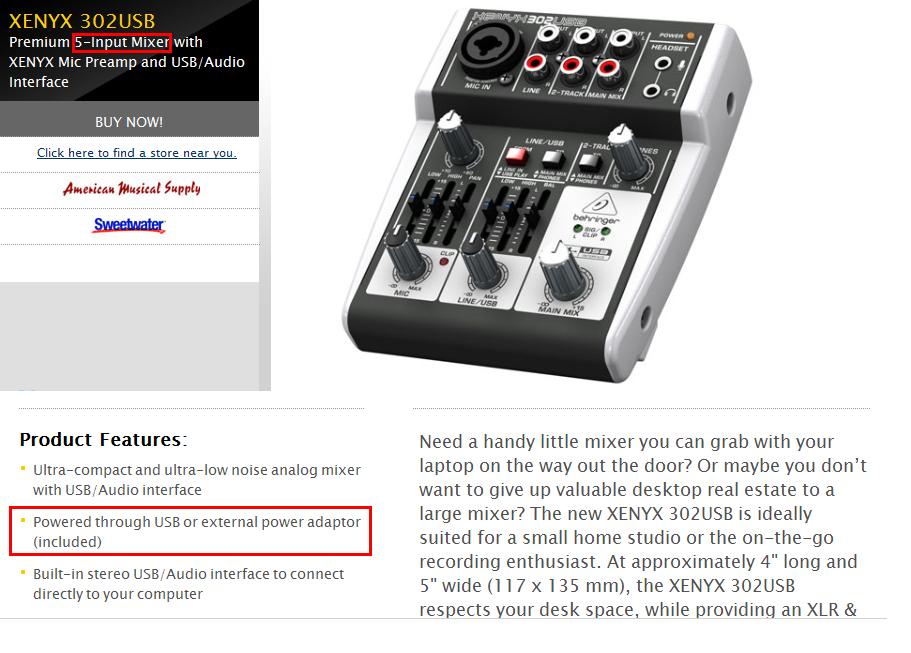 Not easy to achieve technically and I can't vouch for its quality but I know two guys who have facebook "liked" this product and one of them does live gigs.

The trick is to efficiently take a slice of the 5V offered from the USB and efficiently convert it to a higher voltage that is more practical for audio mixing such as 12V or 15V. There have been really cool advances in this technology from companies such as Linear Technology, Analog Devices and Texas Instruments.

The next trick is finding the silicon (op-amps) that work close to the power rails without distorting or introducing much noise. Again there is a recent plethora of op-amps that fit the bill and 5 years ago they probably wouldn't have been avaialble. And like the power chip inverters the same companies are involved.

I use my Xenyx 302USB mixer every weekend for 8 hours on Saturday And 7 hours on Sunday as a Busker in the Strip District in Pittsburgh, PA. I am 63 years old and have the chops to master tech and Music. I power it with a Zagg Power Brick or my HP Elitebook 2760P if I am useing Reaper to record. With the Boss VE-8 Harmonizer, I sound darn good for an old fart. The 302 has never let me down and even runs in the rain. I am A. J. Fronce and I approve this mixer.

Most soundcards these days include some sort of mixing functionality on-board. The snag: it's a digital mixer with the controls having to be sent through USB. The necessary A/D+D/A conversion incurs delays (since downsampling and the necessary digital aliasing filtering happens in the converters, otherwise one could mix the non-downsampled signals and be much faster). Also you need some software running on your computer, and optimally a Midi control device since those are a lot more hands-on than a mouse.

Mixers with digital recording outputs (like the Mackie Onyx 820i with Firewire) tend to have their own internal power supply, and for good reason. As do larger soundcards, by the way. It's just the more reliable option.

I use a Tascam US-122L. It's a somewhat dated sound card with two microphone/line inputs with 96kHz/24bit specs, there are big dials for the respective two gains, one for setting the ratio of the main output (RCA jacks) between monitoring and computer, and one for headphone/main output volume. In a pinch, this will serve as a USB-powered mixer.

It's built like a tank and has no digital mixing circuitry included. So hanging it off some power supply instead of a computer (though no harm done by using a computer or powered hub) will land you with a minimal analog mixer and/or headphone amp. Frankly, it's probably heavier and bulkier than a more modern component and a power brick together, but then you can just stuff it in your bag without much of a worry that it wouldn't survive.

The gain dials don't go down all the way to zero, though.

4
How to record my Mackie digitally via USB?
0
A budget audio interface with surface controls and multi-track recording ability
4
Would a Thunderbolt audio interface decrease latency (in theory)?
3
Audio Interfaces - Internal versus External (USB) recommendation
1
Why does my sound card output a high pitched sometimes oscillating sound or whine?
0
Random crackling audio when recording through USB devices on 2013 iMac / Mavericks
2
Help with setting up audio recording for retirement home meeting
0
How to tell number of audio channels exposed to computer over USB?
0
Using a mixer with a PC and PS4