I'd like to create some music for small, totally aficionado videogames.

My sound requirements are:

So I've concluded that I need a tracker program. With that in mind, I can center my search a bit more:

So far I've found SoundTracker, ChibiTracker & MilkyTracker (from this wikipedia list. Sunvox also appeared on that list, but it only exports to midi and wav). The only one that doesn't look abandoned is MilkyTracker. I've tried it, but it's interface is non-understandable to me. So many buttons!

Is there any other software there that I should know about?

SunVox is actually really good and is under active development (latest release as of the time of this writing was 4 Feb 2014). It is also supported across all desktop platforms and mobile devices. So you can compose anywhere, when the mood strikes.

As for the formats it exports, it's pretty darned trivial to convert a .wav file to an .mp3! So really not sure what the issue is there :)

I do have to say that although SunVox is pretty cool anbd very powerful for its simplistic interface, it's probably not got as much learning material as a product like Renoise, which actually has its own youtube channel for learning the application.

You've found all the big modern trackers. There isn't nearly as much development as there used to be, mostly because it's now almost trivial to compress and distribute a traditional waveform recording using lossy codecs like MP3 or AAC. Tracker music in wavetable modules like the ones libmodplug can read are mostly just for enthusiasts now.

If you don't mind having to export to audio, but still want to use a tracker to compose, Renoise is quite popular, since it can act as a host for plugins like a DAW but still uses tracker notation to control them. It's presently within your price range and does work on Linux.

You're definitely going to have to learn a few buttons and somewhat obscure commands if you want to use a tracker. Fortunately, the concept isn't that hard, so long as you have a good grasp of music. If you can write a tune on a piano, you can certainly transcribe that into a tracker without too much trouble. But if you're new to composing music at all, you might find trackers to be a bit much at first since it takes longer to experiment.

Does your game have to use libmodplug? If you have the resources to use recordings, you might find that a lot easier. And there's a lot more modern software that you can use to compose and record.

You should look in to Audacity. Free, open source, very capable multi-track software for audio production. It is a much better platform for producing any kind of audio than something like SoundTracker. You'll want to pair Audacity with some software synthesizers and score MIDI in Audacity that plays the software synthesizers. You can write your score in Audacity this way and then bounce the final score to a stereo MP3 file, all from within the software.

There are a literal ton of free virtual instrument synths to choose from. The best place to find them is via KVR Audio's VSTi search engine. Just filter your search so it only shows free plugins that support the platform you're running Audacity on.

I don't know if Anvil Studio would be what you're looking for: 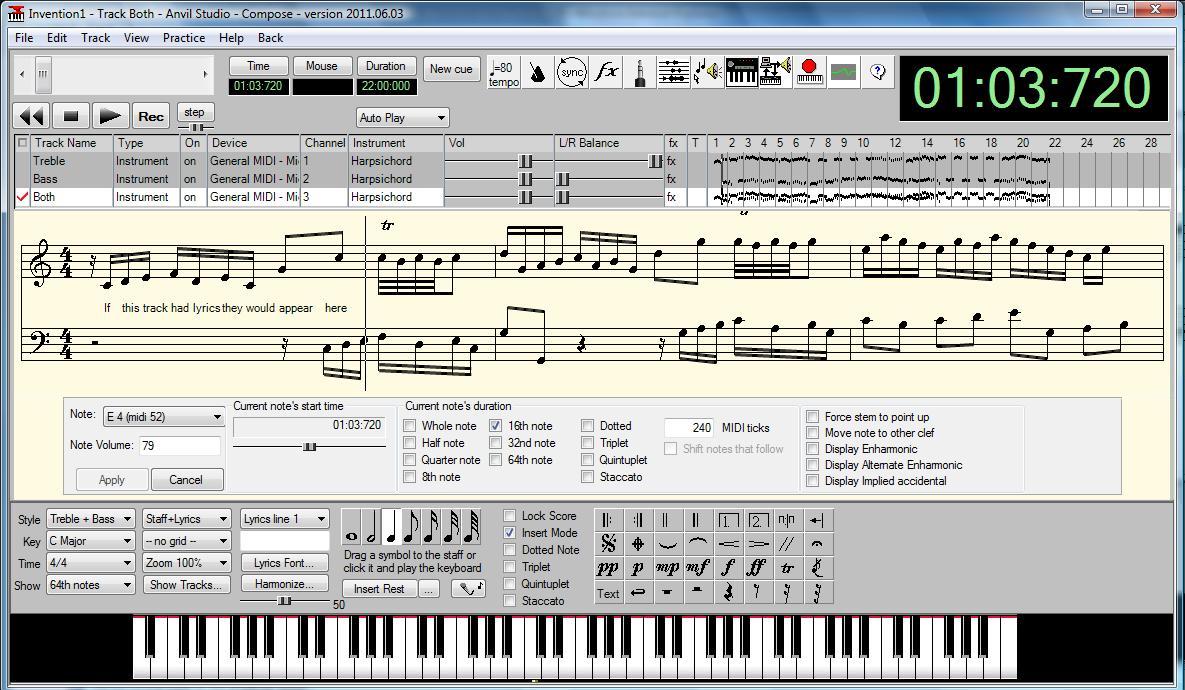 It's not free, but there is a demo:

"The standard, free version, of Anvil Studio only records one audio track for one minute, but you can use it to see how it works with your setup."

It seems to support exporting/importing of MIDI files.

Not the answer you're looking for? Browse other questions tagged software or ask your own question.