How do I produce this effect?

Can somebody tell me what effect/processor I need to apply to make any sample "stutter" like this chainsaw in this trailer @ 0:58

I'm using Cubase and Sound Forge, so if your answer could be related to either. Even better! Thank you.

2, use a tremolo plugin set to square wave and automate the mix control

3, insert a copy of the sample into a sampler and punch in 16/32nd notes with slight gaps (turn release down to 0)

4, chop small sections out of the clip.

There's a few alternatives, but they are usually plugins

Assuming you have a chain saw. Record it with a tap delay configured for short bursts.

Perhaps this technique will be of value to you:

[Anything to get more good dubstep out there]

Listen to that clip again and notice the following things:

In order to achieve this effect, you are going to need at least two Low Frequency Oscillators (Plus these are the bread and butter of any dubstep master) and some form of modifier on the original sound.

It sounds to me as if the original is driven (after re-verb and probably resonance filters) through a compressor limiter. I suspect that the compressor's gate is driven by an LFO (which is itself driven by a second LFO).

You could probably achieve a very similar result by sending an original sound via a Frequency-Resonance filter, and just run the LFO chains on the Frequency dial.

I managed to create this effect (well similar for the most part) in Reason as in the picture below: 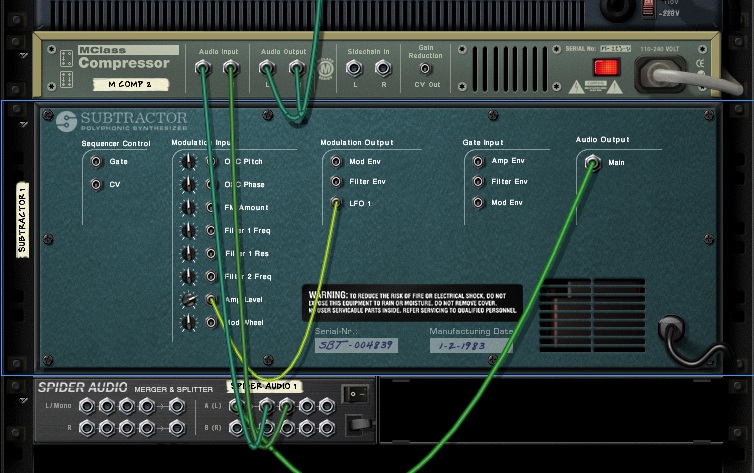 Except instead of routing the LFO's to the compressor (it was quicker) I just routed them to the Amplitude of the Synth it'self.

Let me know how it turned out for you.

Not the answer you're looking for? Browse other questions tagged effects or ask your own question.

2
Free VSTs for manipulating sound?
1
How to make this effect in Skrillex' song
3
How do I reproduce this echo effect?
2
starting an effects rack, but not sure where to start or if needed
7
Voiceover drowns in music. How do I make it more dominant?
1
"Ghostly" effect for vocals in a remix
2
An effective technique for ducking in Sony Vegas?
3
how do I make my voice higher without becoming a chipmunk?
0
what is this sound effect?