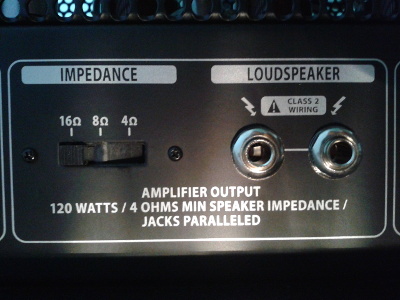 In the instructions there is a table which is not perfectly clear to me. Does "1x 16Ω" mean one speaker of 16Ω or one cabinet (possible with 2 speakers) of 16Ω? This is not clearly writen. I am guessing that "2x" means stereo... 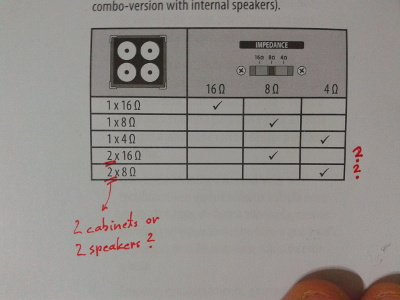 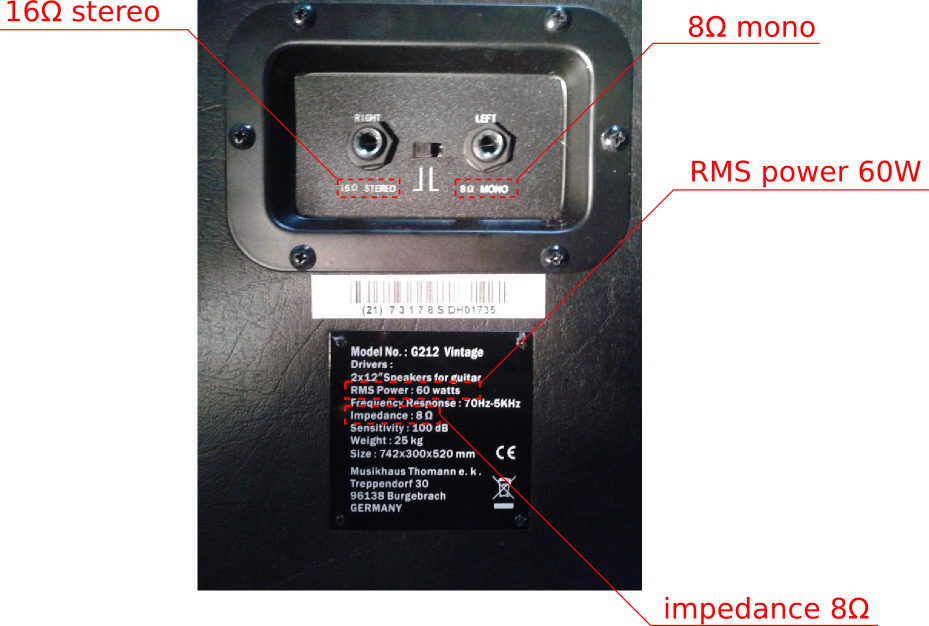 So now lets say I want to use my cabinet in stereo mode. I know that I have to connect both class 2 cables and choose "stereo 16Ω" in the back of a cabinet. But how do I set the impedance on the amp? In the music store a guy said:

The above is only true in case of mono mode (check the table)! Futhermore I got confused when reading markings on the back of the cabinet. I set it to "16Ω stereo" - does this mean I have to read settings for "2x8Ω" or "2x16Ω" in the table? I am guessing that it is 2x8Ω... so according to my table I have to set my amp to 4Ω if i want to use cabinet in stereo mode?

I am allso afraid to fry my cabinet because it says RMS power 60W in the back while my amp is 120W... So could anyone explain all of this a bit and save me from this confusion which is only a result of lack of instructions & explanations.

First off, notice another label on the back of the amp: "Jacks paralleled". This means that both of the output jacks carry the same signal; there are two of them for the sole purpose of allowing you to plug in two cabinets without needing a splitter, or having a "daisy-chain" jack on the cabinets. This is a single-channel amp, as most guitar amplifiers are; you won't get a stereo sound from this rig without swapping the amp head for a stereo head, or adding a second single-channel head.

That makes the decision pretty easy; set the cabinet to mono mode and set the amp impedance to 8Ω, and use one cable from either amp output to either speaker jack.

To answer your question about impedance, the ratings are virtually always for the entire cabinet. In this case it's a little trickier since this one cabinet can be split in half, so to simplify things you can think of this cab as being two cabinets in one enclosure. You've got two speakers, both 16Ω, and you can either run them independently (meaning each channel of a multi-channel amp would be given the 16Ω load of one speaker), or with the switch set to "mono", the terminals of the two jacks are put in parallel, meaning the speakers will be in parallel too (halving the total impedance to 8Ω).

You could conceivably run the cabinet in stereo mode, feeding each side independently from the amplifier's outputs, but the amplifier would see exactly the same impedance, because you'd be running both 16Ω halves of the cabinet in parallel so the amp would still "see' an 8Ω load. The "fork" between the two sides of the cab creating the parallel circuit would simply happen at the amp output instead of at the speaker input (meaning the only change is two speaker cables vs one).

A more useful thing that shakes out of this setup is that, with one cable, you can choose to run both speakers or only one. By running through one speaker, you double the impedance, reducing the amp's maximum power, and you also halve the speaker cone area being driven. This allows you to use this one rig for smaller or larger gigs, using one speaker for smaller rooms, and both for larger.

The power rating of the speakers could be problematic. I typically like to match peak amp power to speaker program rating; that way, the speaker can tolerate, at least for short periods, any amount of power the amp can produce, even a clipped waveform. The label on the back of the cabinet doesn't say whether it's a "continuous" rating (the most conservative; this is the maximum wattage of a waveform that will never harm the speaker even if played 24/7/365) that the "program" rating (the wattage it can tolerate for short continuous periods interpersed across a longer timeframe; "normal" gigging use) or its "peak" rating (the most generous, this is the maximum wattage that the speaker will tolerate without sustaining immediate damage to the voice coil or speaker cone). Check online for more documentation about this cabinet, including the full set of power ratings; if this is a peak rating, I would be very careful with the master volume setting of the amp head until you can supplement this cabinet with a second one of equal rating. If you "dime" the amp, you could very easily warp the voice coils, or in the extreme you could rip the cones right out of the speaker.

As far as reverb problems, it might help to tell us what exact model of amp head you have. You may have the delay set too low, so the reverb effect is too subtle to be distinguished from natural room reverb, or you may have its effect level set too low. The controls you have to play with will be dependent on the amp, so tell us what you have and we can tell you how to troubleshoot it.

Not the answer you're looking for? Browse other questions tagged impedance amplifier or ask your own question.

5
If I want to use a microphone with a portable mini amp, will a preamp/mixer significantly improve the sound quality? This is for small live gigs
3
Troubleshooting amp clicking and muting the speakers
4
Impedance for amp and speaker combo
2
What is the difference between DAC, Sound Card and AMP?
2
What happens when the output impedance of a headphone amp is higher than the input impedance of the headphones?